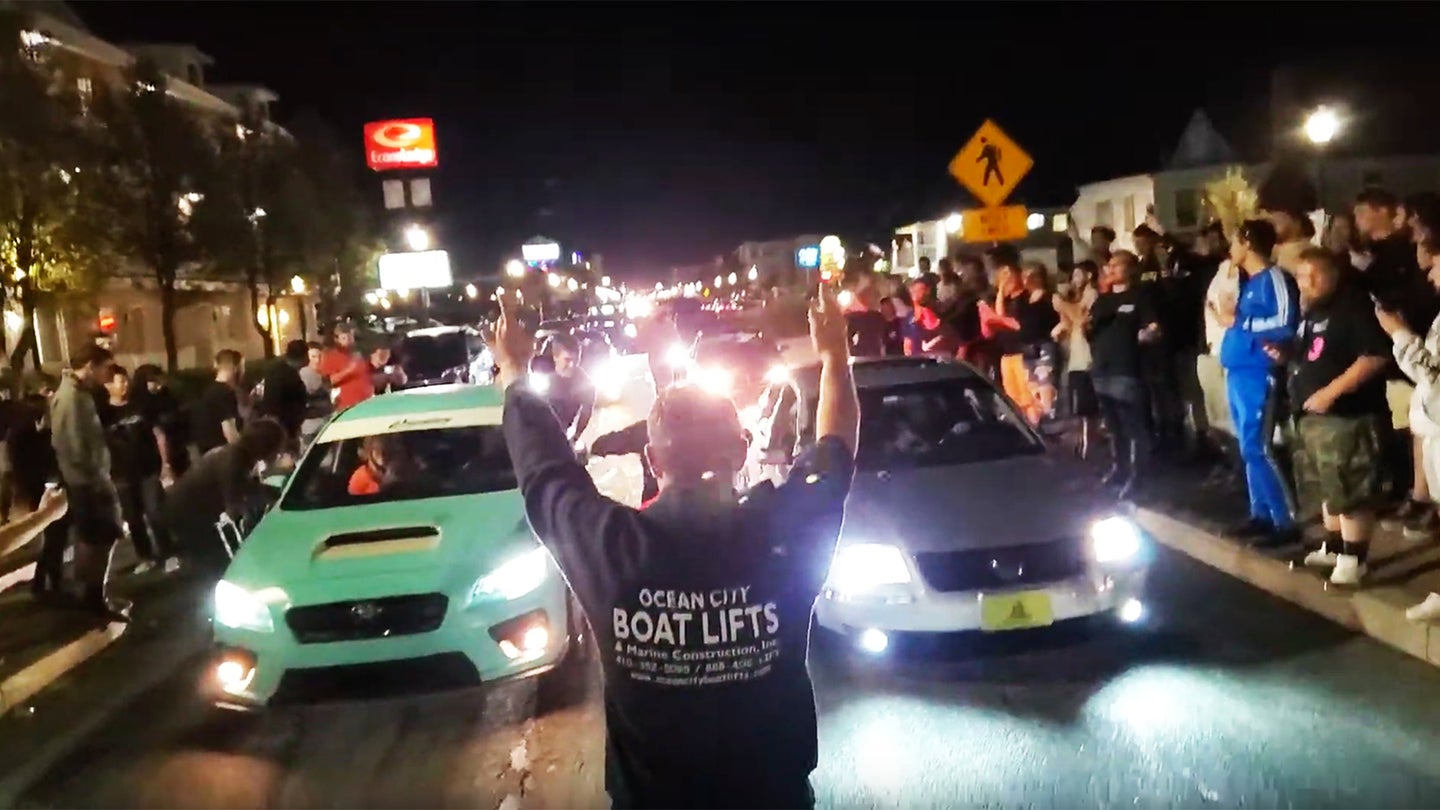 The last weekend of September is a date that lives in infamy for the tired residents of Ocean City, Maryland. For years, the nearby H2O International car show—one of the largest Euro tuner car shows on the Eastern Seaboard—unintentionally drew a motley crew of troublemakers who took over the beach town for three days with unsanctioned street racing, intersection takeovers, and general lawbreaking idiocy. In 2018, the show pulled up stakes and relocated to New Jersey in part to deter bad actors and lower tensions with the increasingly irate OCMD community. But the unofficial mayhem hasn't stopped; authorities say this year was one of the worst yet. The hive mind is proving hard to kill.

In addition to general hooning on public roads, the chaos this year included a hit-and-run involving a child, a large gathering at an intersection that ended with police and attendees trading blows with pepper spray and bottles, and all the standard stoplight racing and other illegalities that suck up the city's emergency resources for a weekend. And Mayor Rick Meehan has had enough this time.

"What took place this past weekend in Ocean City can never happen again." Meehan said on Monday. "This group came to town with the sole purpose to raise havoc in our community, to disrupt our lives and defy law enforcement."

"They placed our town, as well as our citizens and visitors. under siege and in danger which is unacceptable under any circumstances. Our town government, citizens, property owners and businesses must join together as one voice to take whatever action is necessary to stop this group from returning. This isn’t about just one weekend this is about our future."

Each year, Ocean City amps up its police force by requisitioning assistance from other departments to prepare the enthusiast-fueled weekend. Officers from the Worcester County Sheriff's Office, Maryland State Police, Maryland Natural Resources Police, Maryland Transportation Police and the other agencies typically pour in for temporary assistance with the aim of maintaining (or reestablishing) the peace. Officials also used new legislation to declare the town a "Special Event Zone" ahead of unofficial H2Oi to unilaterally lower speed limits in town and raise fines for moving violations.

And usually, the officers on patrol keep the cruisers of Coastal Highway on their toes by issuing tickets and impounding cars over burnouts and illegal mods like missing hoods and excessive wheel camber. While it's hard to say this kind of amorphous gathering has a theme, stanced and slammed cars are clearly in the majority. To some, the tickets are nothing more than a badge of honor. To others, police have become an obstacle shutting out the fun.

Police reported general disorderly conduct throughout the weekend, issuing hundreds of tickets for everything from speeding to those illegal modifications, though the incident with the rowdy crowd mentioned up top didn't result in any arrests. Authorities didn't release a total arrest count, though last year it was around 80 people. If this year was deemed even worse, then that number would probably track. Rest assured the videos embedded here are a tiny fraction of the total out there on social media from this weekend.

Participants tell a different story, claiming that officers escalated tense situations and were quick to use excessive force like Tasers and pepper spray. One video in particular shows an officer tasing an individual for screaming an expletive at him during a confrontation.

The Ocean City government—along with the real H2O International, it should be noted—wants nothing more than to end this unofficial madness and stop people from showing up every September looking for a lawlessly fun time. But its freewheeling nature is an obvious draw, and there are those who want to work with the city to make it safer and more legitimate rather than see it stop entirely.

Of course, not everyone on the enthusiast side shares that pollyannaish sentiment. It just takes a peek at social media hubs like the various Instagram pages dedicated to hyping and documenting the madness. "Just send it" is the general retort to anyone preaching safety. And turning this into a sanctioned event isn't as easy as flipping a switch. That takes time, money, and most importantly trust. Then again, it's not clear how the city plans to address this moving forward outside the mayor's solemn vow. It's not like authorities can keep an entire community from entering the city. They could enforce even stricter vehicle code regulations and penalties, but that didn't keep the masses from pouring in and eating the fines last weekend.

We will likely find out. Now that the weekend is over, the hive mind seems to be saying with one voice: "See you next year."