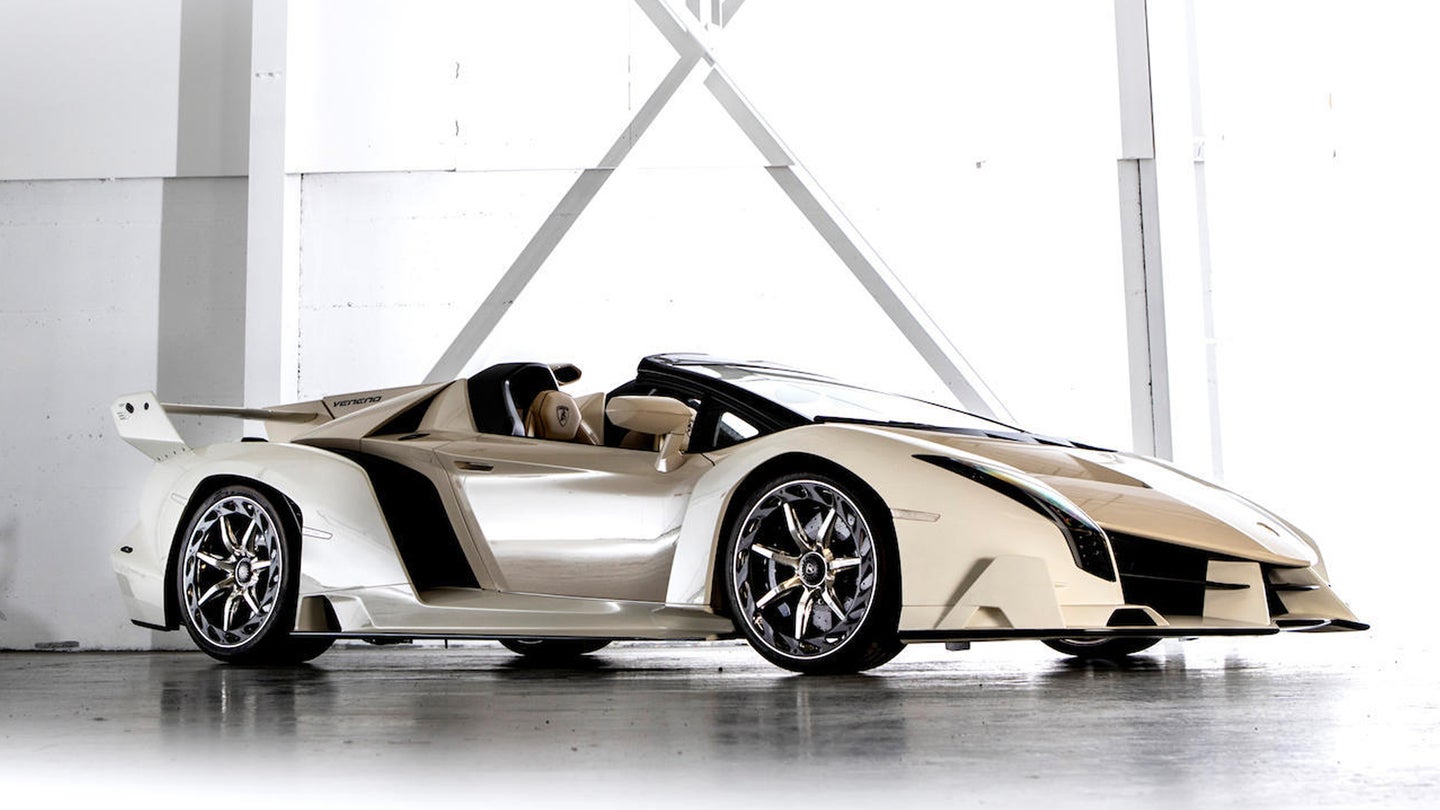 This 2014 Lamborghini Veneno Roadster was one of two-dozen or so cars that ran through the auction block at Bonhams in Switzerland over the weekend, raking in an eye-watering $8.3 million. The limited-production roadster, which has evoked praise and condemnation alike due to its outrageous design, was formerly owned by the famously corrupt vice president of Equatorial Guinea Teodoro Nguema Obiang.

Only nine total examples of the Veneno Roadster were produced, with this particular example carrying a serial number of "007." Unlike other solid-color Venenos, this roadster's sharp-lined body glistens with two factory paint colors; Bianco Isis and Bianco Avorio. Only one other Veneno was sold in Bianco Isis, and that roadster made its way to Hong Kong upon initial sale. This example is also the only Veneno equipped with its chrome-laden wheels, though it's not clear if the vehicle came that way from the factory.

The Veneno was originally unveiled to celebrate Lamborghini's 50th birthday, with the brand touting its magnificent masterpiece as a "race car prototype approved for road use." Its naturally aspirated 6.5-liter V12 engine pumped out an ambitious 740 horsepower and made sounds comparable to 1,000 angels singing from the heavens. Oh, and it could also do zero to 60 in just 2.8 seconds.

When new, the car sold for an outlandish $4.5 million—meaning that it's overall worth nearly doubled in just five years. This, of course, is rather tame given the asking price of other examples that we've seen in the past.

Considering that car only had 200 miles on the odometer, it's fair to say that this was a rather worthwhile investment. Or at least it would've been had it not been confiscated by authorities and sold a result of a criminal investigation.

Swiss authorities recently closed a prove into Teodoro Nguema Obiang, better known as the vice president of Equatorial Guinea. Allegations of money laundering and misappropriation of public assets led to a total of 25 vehicles and a luxury yacht being confiscated from the infamous playboy. An arrangement was made to have the vehicles auctioned off and the proceeds used for social programs in Obiang's home country.

In total, Swiss authorities brought in $27 million for charity from the 25 supercars that were sold at auction. In total, a lineup of vehicles comprised of seven Ferraris, five Bentleys, three Lamborghinis, and a Bugatti Veyron. But the Veneno was the car that really brought in the big bucks, even more than the famed Koenigsegg One:1.