You only need one tool, which is provided in the emergency toolkit, and about two minutes of your time. Voila! 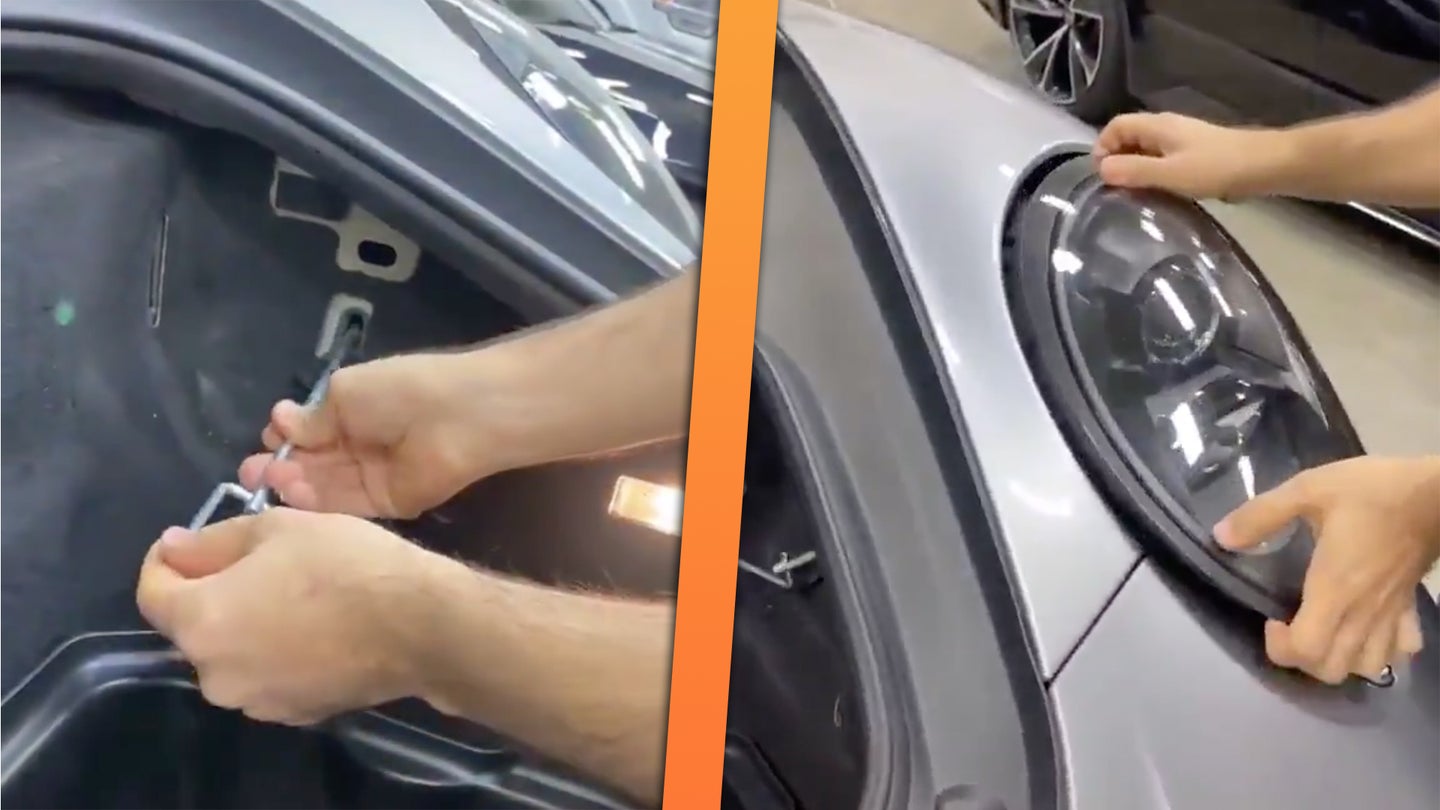 If there's one thing I hate doing, it's removing a car's bumper cover. There are too many tabs to break, too many clips to snap, and—if you're like me—too many screws to forget to place in a magnetic tray and lose while looking for your 10mm socket. On some cars, replacing the headlamp assembly also requires removing a bumper cover, though many more fortunate people get away with just a few bolts on the top of the assembly. But then there's Porsche, who has mastered the art of removing headlights with ease and precision.

As it turns out, removing the headlight from pretty much any post-996 Porsche is perhaps the simplest removal of just about any car I've ever seen. Simply insert a tool packaged with the car's factory-supplied emergency tool kit into a small passage, give it a turn, and pull the entire assembly out.

The magic here works by using something Porsche calls the "clamping bow"—a small piece of metal used to retain the headlight onto the mounting bracket nested inside the car's fender. On the end of the bow facing the interior of the front trunk is a male hex-end that matches up perfectly to the OEM headlight removal tool which is conveniently included with the car's emergency tools.

Whenever a headlight goes out, or if the assembly itself has to be removed for some reason, simply lift up the carpet in the frunk next to the headlight and insert the tool. A quick half turn will rotate the clamping bow and begin to push the headlight out of its nest.

Or, if you prefer non-proprietary hand tools, a Porsche tech and I talked to about this setup and he said you could use a 5mm hex socket on an extension for easy removal—but he also cautioned me to make sure that I taped it first unless I wanted to sacrifice my socket to the Porsche gods.

Once the assembly is out, you can access the rear of the housing to remove the bulbs and replace if needed. This seems to be quite a bit easier than working your hand between components in a cramped engine bay, though if the 911 had its engine up front, this exact mechanism might not exist at all.

Crack wise about German overengineering all you want, but this is one of those small details that makes the lives of DIY-ers all over the globe that much easier. It also makes you wonder just what other engineering secrets are hiding in other cars.

Elsewhere, the 993 generation was already on the road, and the Turbo’s future looked uncertain in the U.S.