Just get a wagon, you heathens. 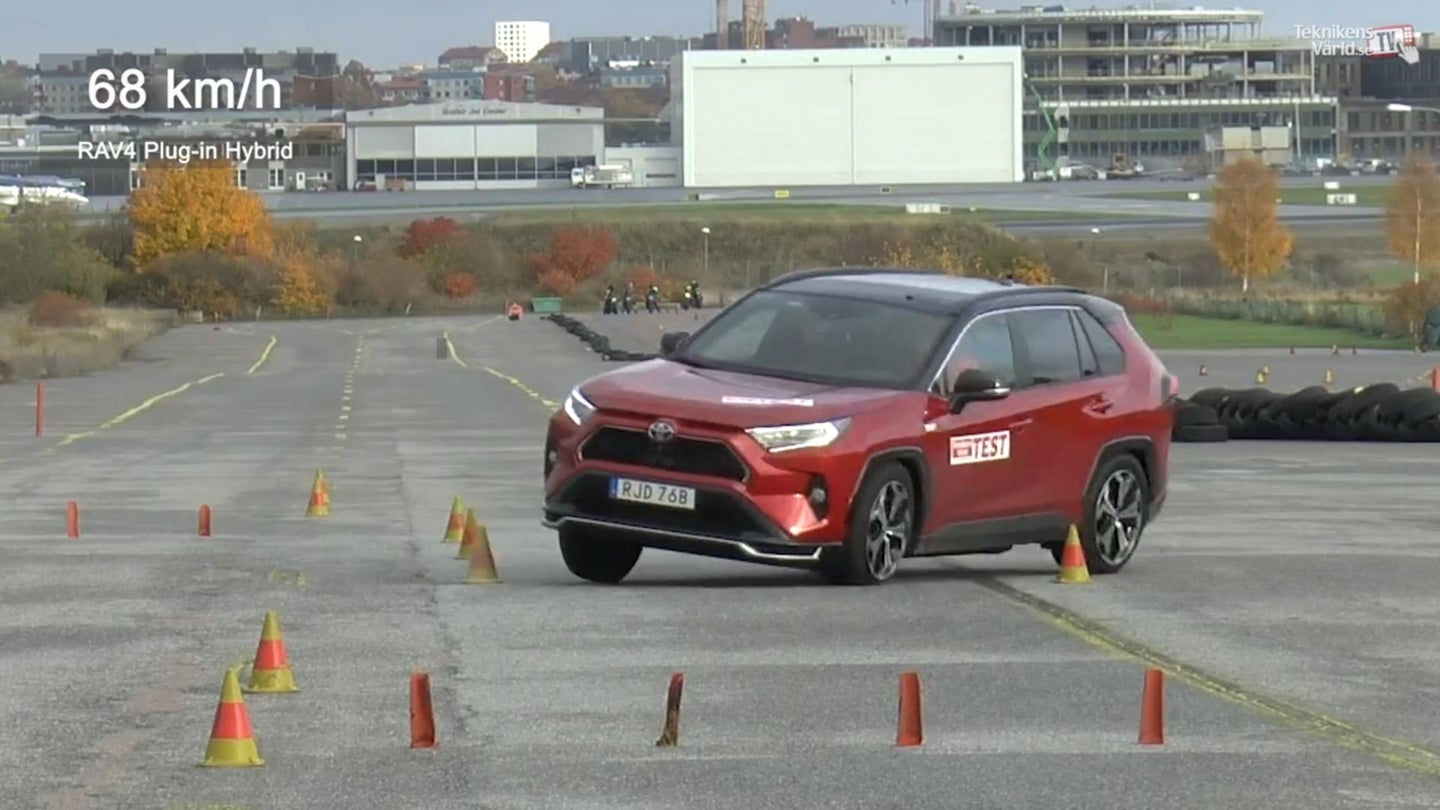 When Sweden's Teknikens Värld put the Toyota RAV4 Hybrid through the so-called "moose test" late last year it failed quite badly. The popular Japanese crossover exhibited what the publication called "dangerous behavior" when asked to quickly move to the left and to the right at 42 mph, just as a driver would when suddenly encountered with a surprise moose on the road. Well, the same Swedes have now tested the plug-in RAV4 Prime version and the results are "significantly worse" than the regular Hybrid.

Even after Toyota apparently revised the RAV4's stability control system due to its first poor showing, the Prime returned wild oversteer at 42 mph knocking over three cones on the outside of the course, with the front left rim appearing to separate from the tire such that it almost touches the pavement. Teknikens Värld says the stability system did not seem to engage at all.

"The rear end goes out in a skid that doesn't end until I steer against it hard enough. The skidding angle is extreme," the publication writes. Swapping drivers produced the same result. Eventually, the RAV4 Prime successfully navigated the test at 39 mph, not fast enough to earn it the pass.

See the test for yourself.

They also had a couple of other plug-in crossovers on-hand, a Mitsubishi Outlander PHEV and Volvo's XC40 T4 Recharge, both cars which also failed but not quite as spectacularly as the Toyota. In spite of all this, the RAV4, Prime or otherwise, remains extremely popular among the American buying public, with the 302-horsepower plug-in model commanding dealer markups as much as $10,000 over sticker.

Notably, this isn't the first time a high-riding Toyota product has flubbed this particular safety test, as two separate generations of Hilux have previously come close to flipping over when presented with the imaginary moose.

When Teknikens Värld brought its latest RAV4 Prime moose test results to Toyota's European arm, the company apparently replicated the test itself, achieved the same results, and says it's now working on a fix that'll be applied to existing customer cars "within the first quarter of 2021" and all RAV4 Primes coming off the assembly line "shortly afterwards."

"The RAV4 plug-in hybrid has successfully passed all development testing and fully meets all safety regulations in force in the market on a worldwide basis. Furthermore, it also complies with Toyota internal standards, which surpass the regulatory requirements in a wide array of testing circumstances.

It must also be noted that the RAV4 plug-in hybrid is fully equipped with the most advanced version of the Toyota Safety System including a comprehensive range of the latest safety technology, among them a Pre-Collision System, Lane Departure Alert, and Vehicle Stability Control. Following Teknikens Värld’s evaluation, we have replicated their Elk test, which includes an extreme obstacle avoidance maneuver, and have produced similar results.

As a countermeasure, we will now take steps to ensure that RAV4 Plug-in Hybrid can pass Teknikens Värld’s Elk test. In the meantime, we would like to reassure our customers that the RAV4 Plug-in Hybrid remains safe to drive. However, in the spirit of continuous improvement, we will make this upgrade available to all customers who would like it within the first quarter of 2021, and we will introduce the upgrade into mass production shortly afterwards."

We've reached out to Toyota USA ourselves for further comment and will update this story when we hear back.

The takeaway from all this? Well, I think this screengrab below pretty much says it all.