The first-ever Ford F-Series had a base MSRP of just $1,279. Amazingly, that's no longer the case. 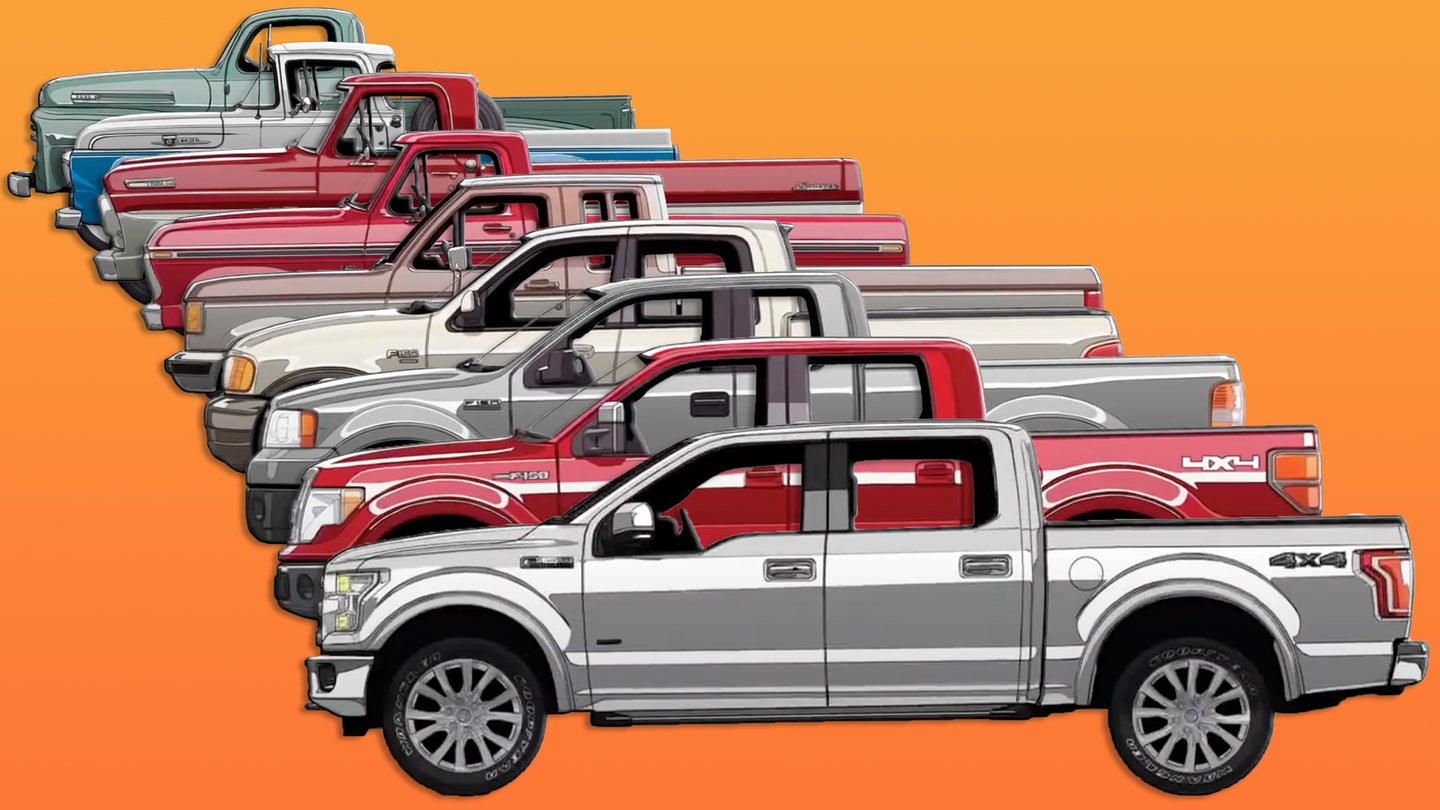 Whether you look on paper or the road outside, there's no denying the Ford F-150's massive popularity. It's been the best-selling truck, and often the best-selling vehicle, period, for the past 43 years. Through economic success and crippling recessions, the F-Series has consistently rolled off the assembly line and out dealership doors and eventually onto America's driveways. Exactly how much customers have paid to leave with their own Ford pickup has changed drastically over the years, of course, and the all-new 2021 Ford F-150 will only build on that upward trend.

We're taking a look way back to the original Ford F1 half-ton from 1948 for this comparison, since that's the modern truck's closest equivalent. Even adjusted for inflation, trucks ain't as cheap as they used to be—far from it. In fact, base pricing for a current-generation F-150 is significantly more than double that of the aforementioned F1. Then again, when you consider everything you get on modern trucks—from safety equipment and emissions gear, to features that make it basically a rolling office that can tow many times its own weight—it does make some sense.

These prices all represent the entry-level models for the first year of each generation. Original MSRPs are provided by the National Automobile Dealers Association, and the inflation calculated by the Bureau of Labor Statistics' official online tool is reflected in italics.

Ford suggested a retail price of $1,279 for the introductory F1 truck some 72 years ago, which equates to $13,836.62 in today's money. For that, you got a 226-cubic-inch inline-six and a three-speed manual gearbox. Work capabilities seem modest, especially when pitted against trucks from this century, as the '48 F1 had a GVWR of just 4,700 pounds. In other words, you'd better not be hauling too much around the farm.

Later generations progressively grew larger and more comfortable for everyday use. Options like a 390-cubic-inch Lincoln Y-Block V8 became available for the second-gen, while displacement was honed in later down the line. One fairly constant option has been the 5.0-liter V8 which was introduced in 1967 and is still available today, albeit severely overhauled.

The first crew-cab F-Series truck—by far the most popular configuration in today's world—was rolled out in 1965, but wouldn't make its way to the half-ton until 1980 with the "Bullnose" generation.

Out of the F-Series' 70-plus years on the market, two of the most substantial shifts have come in the past decade or so. First was the EcoBoost engine's unveiling in 2009—a twin-turbo V6 that produced V8 power with a fraction of the displacement was bold. Now, though, there are two EcoBoost engine options for the F-150 lineup: a 2.7-liter as well as the high-output 3.5-liter that's also found in the Raptor. Ford even notes over half of the F-150s it sells are powered by EcoBoost engines.

The second was the aluminum body introduced for the 2015 model year. Many expected repair costs to skyrocket, though they have proven to be about on-par with steel while being far lighter and even more resistant to small dings. This type of construction has since found its way into the Super Duty lineup. In short, it makes it possible to take weight out of the bodywork and, instead, invest it in the strength of the fully boxed steel frame.

Pricing for the 2021 Ford F-150 is yet to be announced, but expect it to make a steady climb over the outgoing generation. A single-cab, naturally aspirated V6 truck is still anticipated for the F-Series' 14th generation, though most that find their way into the public's hands will be far more expensive—think around $40,000. Considering you can spec a current F-150 Limited to $75,000, the sky is the limit for Dearborn's next flagship.