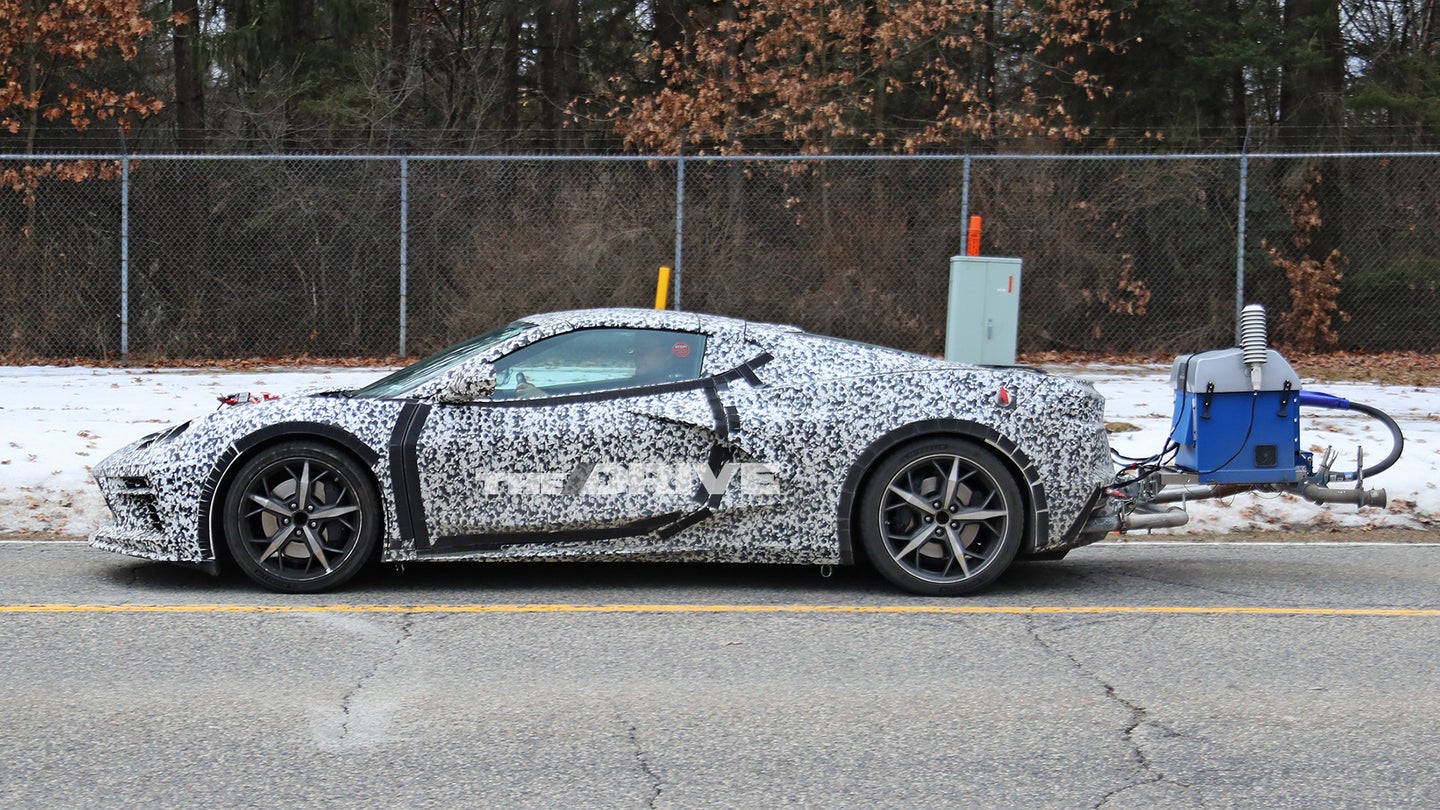 Rumors of faster, wilder versions of the new 2020 Chevrolet Corvette abound in the wake of the car's debut. We've already seen one test mule tear away from a bystander's camera in a huff, sounding suspiciously like it was powered by the flat-plane crank V8 in the C8.R racer. Now spy photographers have captured another camouflaged prototype that looks to be an early version of the much-discussed hybrid Corvette. And we know Chevy's not going electric for fuel economy here—is this our first look at the plug-in ZR1 powerhouse we've been teased with?

Possibly. It's also possible this is a peek at another midlevel hybrid Corvette; remember, GM's had the name "E-Ray" trademarked for years now. Let's break it down.

Ignore that emissions testing box for now, distracting as it may be. The real evidence rests on the front right fender: heavy-duty electric cabling running down into the frunk, along with an exterior kill switch (plus a second kill switch at the rear). Our guess is the rigging up front is connected to either the hybrid battery—specs on that are still unknown—or a dual-electric motor front axle system similar to the setup in the Acura NSX.

Motor Trend reports the ZR1 won't come until 2023, so it's plausible that engineers would still be testing an incomplete version of the powertrain. Obviously, this mule is missing all the extreme aero you'd expect with a rumored 900-horsepower track weapon, though that would also make sense for an engineering mule. As for that weird box floating off the back end, it's likely set up to record fuel economy and provide emissions data, though we can't say for sure.

But there's also that E-Ray trademark filing to consider, and GM Authority has its own sources within the automaker saying that the car in this pictures is a tester for a less-aggressive hybrid to slot below the ZR1. As for the plug-in vs. regular hybrid debate, we don't see any evidence of a charging port here, but Autoweek previously uncovered evidence in the regular Stingray's fuse box that GM pre-planned for a Corvette capable of moving under electric power only, and the C8 chassis has space for a large lithium-ion battery pack running between the seats, like a transmission tunnel for a front-engine car.

All that said, the spy photos definitely prove that Chevrolet isn't done messing around with the C8, even as the first production Stingray models are just now reaching their eager owners' hands. GM didn't dump a metric ton of money into building a mid-engine platform only to shirk away from fighting for the future. As for now, feel free to speculate along with us.