It even has Levi’s denim seats. 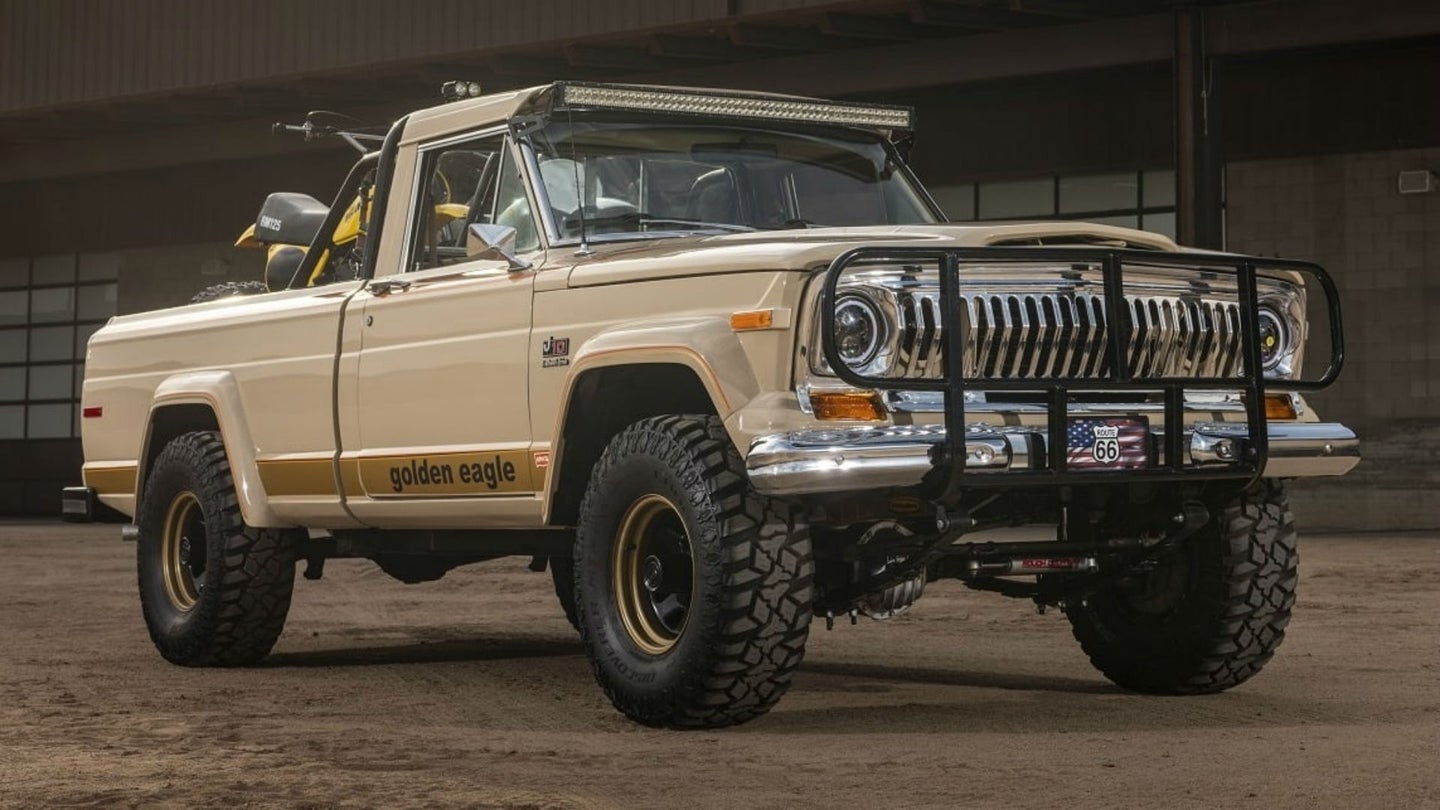 Ultimately, Jeep Gladiator fans owe their respect to the timeless Jeep J10. It's a holy ancestor of the newly minted off-road truck and it carries with it all the key components—four-wheel-drive, rugged looks, and ultimate nostalgia. This 1978 J10 Golden Eagle headed for Mecum's Glendale auction, for example, is one worth lusting after. And since it's already in total desert-spec, it's the one you'll want if you actually plan on using your vintage 4x4.

Most notable about this truck for collectors is the Golden Eagle package, which includes a brush guard, driving lamps, a roll bar in the bed, eight-inch wheels, Levi's denim seats, accent stripes, and that beautiful decal on the Jeep's hood. Then again, if you aren't a collector and simply want a rough-and-tumble pickup to haul your dirtbikes in style, this works too.

Under the hood is an AMC 401-cubic-inch V8, which sends power to all four wheels all the time via a period-correct Quadra-Trac system. A GM Turbo 400 automatic manages all that small-block grunt, which totaled 225 horsepower and 320 pound-feet of torque in stock form. This truck received upgraded aluminum heads and manifolds during a recent restoration, though, so expect that number to be a bit higher now.

The interior looks to be in stellar condition and it even has the genuine Levi's seats, buttons and all. Factory air conditioning provides a nice bit of relief when out in the dunes and the simplicity of everything means no distractions when driving this throwback piece of automobilia.

There are a few modern modifications that help this '78 stand out from the rest, however. The LED headlamps and roof-mounted light bar are new, as is the reversible tiregate. It benefits from modern 33-inch Cooper Discoverer MTP rubber and, aside from that, it's pretty much standard. Even the brush guard and roll bar are original.

Watch for this Jeep to cross the auction block in Glendale, Arizona during Mecum's March 11-14 sale. No price estimates are mentioned on the listing, though we know it won't be cheap. Stock, non-Golden Eagle J10s are known to fetch around $50,000 in similar condition.

It costs quite a bit more than the original, though.