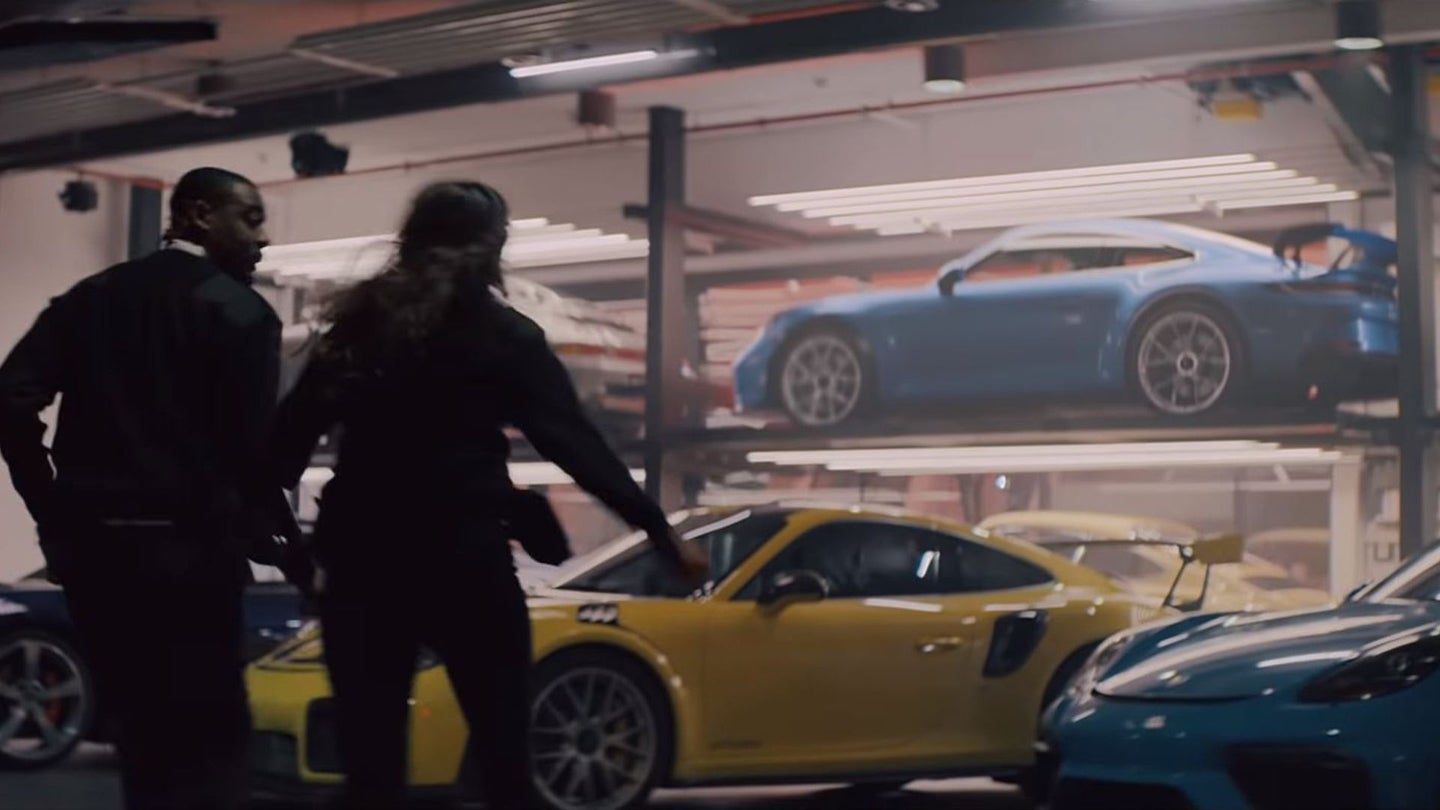 Porsche hasn’t made a Super Bowl commercial since 1997, but up until this year, neither has it made an electric car. Times are a-changin' or so the song goes and now both things are charging forward with a brilliantly choreographed and superbly fun Super Bowl spot highlighting the brand’s Taycan EV in a plug titled "The Heist." However, while the Taycan is meant to be the star of the show, it appears that Porsche accidentally debuted the upcoming 992-generation 911 GT3. Oops.

Before the action starts, and our possible GT3 teaser, we’re treated to an almost cartoon-like scene as the burglar slips past several Porsche Museum security guards in a silent Taycan before ultimately tripping an alarm. At this point, the jig is up, and the real eye-candy begins. As the security guards scramble to go after the thief, they jump into several tantalizing Porsche cars and tear off after them—the outcome is much better than seeing a Panamera crash into the building last year.

We get to see a legendary Porsche 917, along with a 918 Spyder, and a multitude of 911s all being selected. Even the intern gets a Porsche, though it's a Porsche tractor. And just as the action gets going, in a "blink-and-you'll-miss-it" shot of a tier of 911s, we're granted a look at what appears to be the new 992-generation 911 GT3. The Marvel-like Easter Egg will require you to pause the video at just the right moment, but it definitely resembles the preproduction prototypes we've spotted blitzing everyone's favorite German racetrack.

From the image, we can see a winged Sapphire Blue 992 Porsche 911, a car we've most definitely never seen before. The new multi-element fixed-wing blends into the body with a pronounced ducktail spoiler and doesn't appear to be a variant of the 911 GT2 RS's. Center-lock hubs attach race-inspired wheels to the body and the 992's signature taillights are clearly seen. Other than that, not much can be gleaned from the accidental tease other than someone at Porsche didn't think we'd notice or they're about to lose their jobs as Porsche hasn't released even a single shot of the new 911 GT3.

The Drive reached out to Porsche to confirm the 911 GT3's existence in the video with a Porsche representative responding with, "Please understand that we do not comment on speculation surrounding potential future product." Not exactly helpful, but nor is it a straight "no," which Porsche could've said.

The real star of the show—at least as intended by Porsche—is the new all-electric, $150,000 Taycan, which can reach 60 mph from a standstill in just three seconds, or faster if you're willing to shell out more cash. The chase takes us through narrow German streets and through scenic backdrops before the Taycan is cornered on a bridge. At the end, we find out that it was just a game played by another Porsche employee, but with all that hardware at your disposal, who could really blame them?

We’ll see the new ad make its television debut at the big game, but we will have to wait at least a little longer to see the new 911 GT3 in its full glory as its debut is likely set for later this year at the Geneva Motor Show, where Porsche has a long history of go-fast introductions.