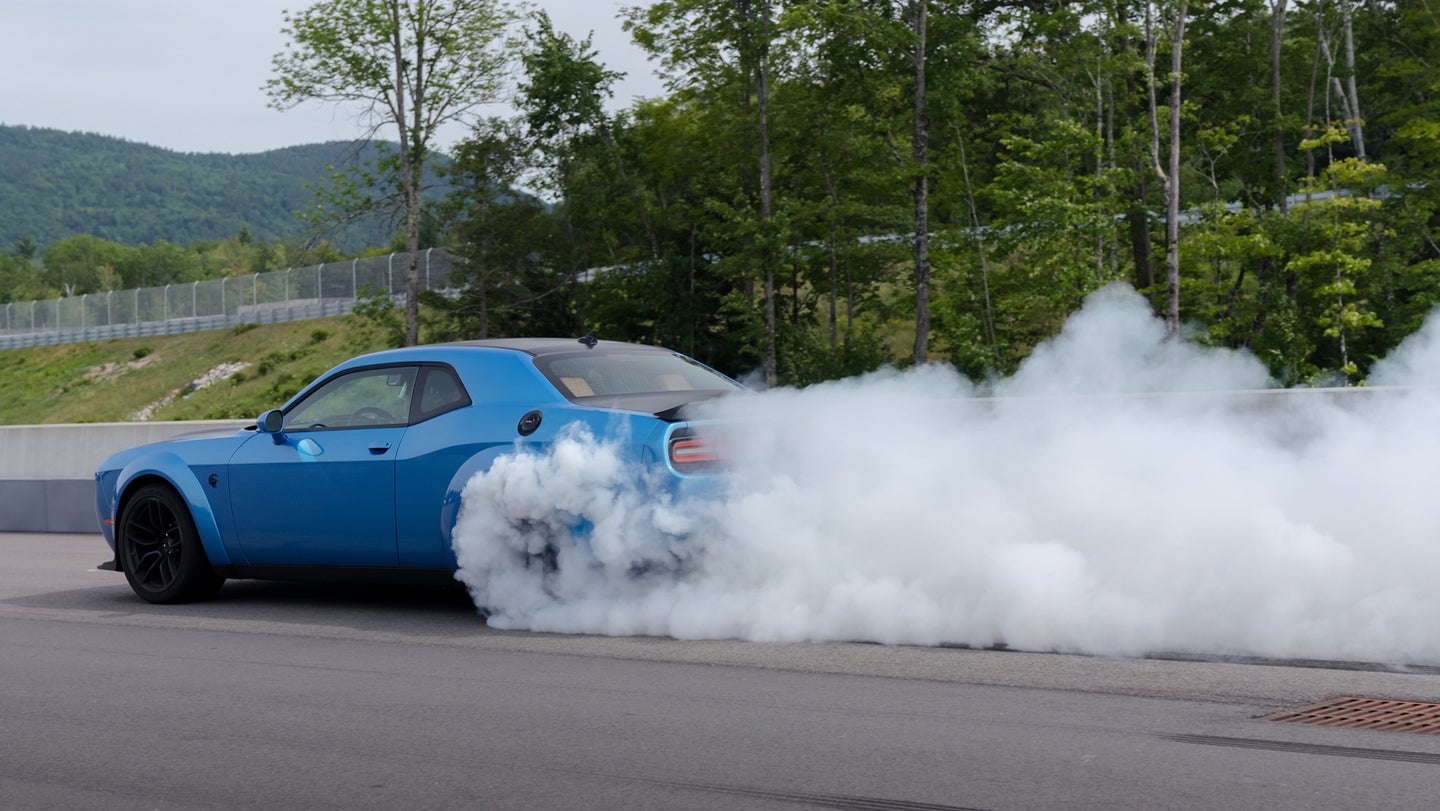 The Hellcat engine was introduced for the 2015 model-year Dodge Challenger and Chargers to widespread adoration. Here it is, a beacon of 707-horsepower hope in our bleak existence, here to brighten everyone's day with giant clouds of tire smoke and satisfyingly quick drag strip runs. But just what exactly has Fiat Chrysler Automobiles, Dodge and Jeep's fine corporate overlords, unleashed onto the world with the 56,706 Hellcat-powered cars since its introduction: well, by The Drive's math, 40,911,122 horsepower. U.S.A! U.S.A!

Allpar recently released the production numbers for each Hellcat-powered car, and from there, we figured out how much horsepower FCA has released from the factory to menace the general public.

These numbers—which aren't terrible for the top trims of a niche muscle car—are extra amusing given that certain European executives were certain the Hellcat cars would be a money pit to develop. They just didn't see the appeal of sticking over 700 horsepower in relatively heavy, but comfortably big cars. The entire premise is more American than an apple pie getting eaten by a bald eagle, so in this case, we're glad the execs who didn't know the market let it happen.

Allpar's numbers come with one big disclaimer: FCA doesn't release production numbers for their cars, much less production numbers by model or trim level. Rather, they come from a respected member of the online Mopar community who goes by the screen name PLMCRZY.

"We don’t know where he gets the numbers, but since the Hellcat hit the market for the 2015 model year, PLMCRZY has provided the production numbers that have become the trusted totals," Allpar explains.

Production data is interesting, but the Hellcat phenomenon has always been about hot, raw horsepower. So, we calculated that amount using horsepower figures provided by Dodge and PLMCRZY's total production as figures as cited by Allpar.

FCA has released nearly 41 million horsepower bone stock from the factory, which I've broken down by model below.

Of the 10,430 Hellcat-powered vehicles made in 2019, only the 3,978 Jeeps and Chargers came with standard 707 hp engine. Dodge clearly anticipated extra demand for the Challenger's bumps in horsepower, as 6,452 2019 model-year Challengers were made with some kind of upgraded horsepower figure.

One of the most powerful models had the largest production number, as the new 797-hp Dodge Challenger SRT Hellcat Redeye Widebody topped the Hellcat-powered production charts with 3,353 cars made. Its non-widebody Redeye counterpart will be a relatively rare find, however, with just 604 cars made this year.

A whopping 56,706 Hellcat-powered vehicles have been made to date, 46,954 of which came with the standard 707 hp. That means 9,752 vehicles were made with additional horsepower—just over a sixth of FCA's total Hellcat production numbers.

(We must note that Allpar's article claims the total Hellcat-powered production number is 56,686, however, the rest of the numbers cited simply didn't add up to that figure. The Drive has reached out to the author for clarification on this, just in case.)

This brings the total horsepower count up to 40,911,122 horsepower—and that's just from the factory. The Hellcat became such a hit as an engine swap that the fine corporate overlords at Fiat Chrysler Automobiles even started to offer the engine alone as a "Hellcrate," and as a "Hellephant" for your 1,000 horsepower needs, each ready to be stuffed in a Yugo for all they care. More horsepower for all!

Think of all the modified Hellcats out there—not to mention those Hellcrate crate engine-bequeathed cars—and FCA has clearly blessed the world with many, many ponies.

Only 501 of these high-powered muscle machines will be built in honor of the original ’69 Charger Daytona.