Just know it'll take a pretty penny to land this thing in your garage. 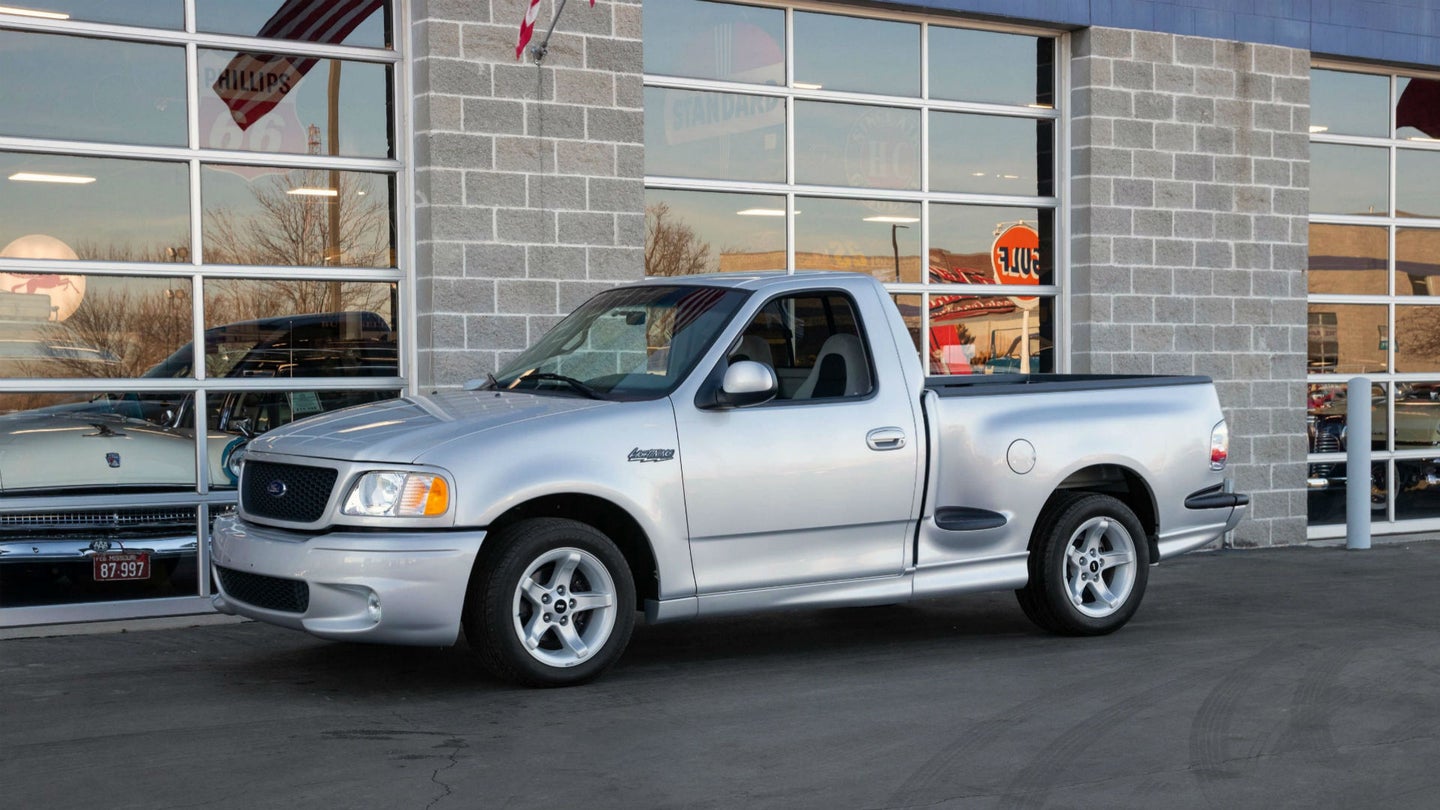 At the turn of the millennium, automakers weren't afraid to pack ultra-powerful engines into normally pedestrian pickups. The Dodge Ram SRT-10 is an example of that, as is the F-150-based Ford Lightning with its supercharged 5.4-liter V8. For many, the latter is a holy grail item that represents the pinnacle of unexpected performance, and the second-gen model is known to be particularly pined after for its period-specific styling. So what if we told you there was a one-owner, virtually new 2000 Ford Lightning for sale in a small Missouri city with just 537 miles?

It's no lie, as you can see by Fast Lane Classic Cars' online ad. Blemish-free and pretty as a picture, this truck is one of just over 1,000 examples finished in Silver Metallic for the 2000 model year. Everything looks to be original—including the Goodyear Eagle F1 tires, so be careful—and the original sale documents are even thrown in, from the window sticker to the owner manuals.

Under the hood is a barely used, 360-horsepower V8 that also produces 440 pound-feet of torque thanks to a stock Eaton blower. Power is sent to the rear wheels via a four-speed automatic transmission, and everything else is essentially cut-and-dry. This is a truck that was built for speed and speed alone, so don't expect it to haul a camper for your weekend trip—Ford's got plenty of other options for that. The original trailer harness is still in its plastic packaging, though, if you absolutely need to put it to work.

The Lightning's interior is filled with Ford Special Vehicle Team (SVT) motifs that can also be spotted on the 18-inch wheels as well as the tailgate. Two-tone leather and cloth seats adorn the cabin, as does an AM/FM/Tape/Six-Disc head unit that's perfectly '00s. The sole bench provides room for three—if you're a bit on the tiny side, that is—and power locks and windows round out what was once a high-dollar package from the factory.

Not to worry, because it's even more expensive now two decades down the line. While the dealer's website doesn't list a specific price, up-close-and-personal photos posted to a Ford Lightning Facebook group reveal a sticker price of $52,995. At around five times as expensive as most examples found for sale online, albeit with at least 100,000 fewer miles, this is certainly a big pill to swallow. Yet again, that kind of money will get you a fairly common 2020 F-150 Lariat with at least another 10 grand needed if you want a top-trim Platinum model.

Spend your money wisely, folks, but if you've got the means, do what you please. We certainly won't judge.

H/T to Kelly Hass! Got a piping hot story lead of your own? Send it over to tips@thedrive.com