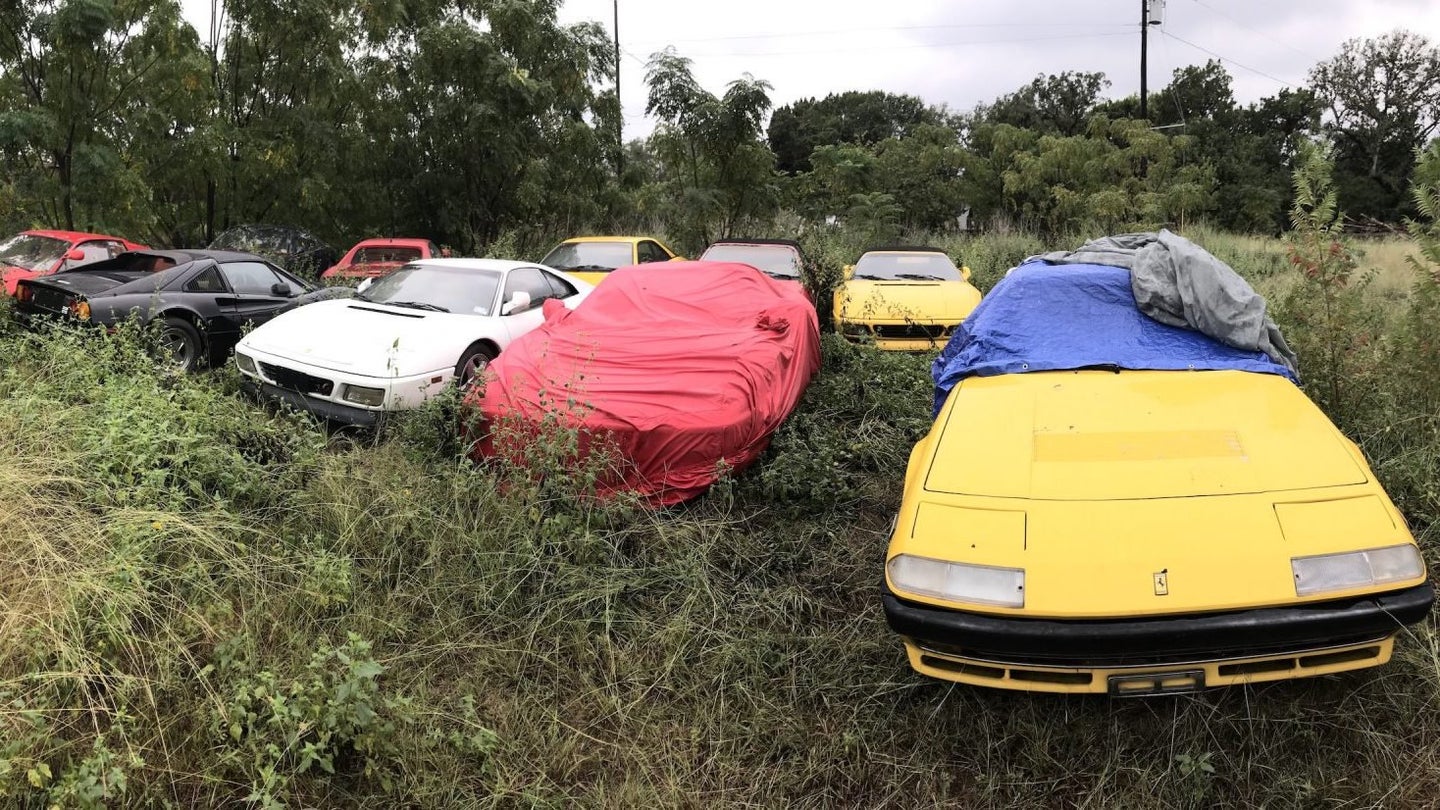 A considerable collection of Ferraris and other high-dollar classics were discovered rusting away in a field somewhere in the United States, but how did they all get there?

It all started with an unidentified attorney whose career made him a man with the means to indulge in his automotive fantasies, reports Silodrome. The unnamed attorney started out with an interest in Chevrolet Corvettes, but his tastes eventually traveled across the Atlantic and brought him to buy at least 20 exotic European cars. Lamborghini, Lotus, Rolls-Royce, and Porsche were all represented in this wealthy enthusiast's garage, as was the most recognizable exotic brand of all: Ferrari.

Over the years, this attorney bought at least 13 Ferraris, ranging from Mondial and 400i grand tourers to 308, 328, and 348 sports cars, and even one of Ferrari's most-beloved classic model—the Testarossa.

But his life of practicing law between purchases of supercars wasn't to last. In 2011, he was diagnosed with an unspecified serious health condition that meant he couldn't drive, so he organized to have his collection stored in a friend's secure warehouse. After the attorney's condition caused him to miss a few payments, however, said friend—evidently not much of one—evicted the collection of cars, rolling them onto a field.

According to the original report, payments eventually resumed and back payments were addressed, but for an unknown reason, the person paid to store these cars didn't move them back inside the warehouse. They were left in a field for years, exposed to the elements, and never driven.

What ultimately became of the man who owned these cars isn't known, though Silodrome reports that his family wasn't able to take possession of the cars until recently due to their inheritance being postponed by unspecified legal proceedings. Once the family showed up to evaluate the cars (none of which were in drivable condition after being left outside for years), they discovered documents that suggested as many as 15 cars were originally part of the storage agreement, including 13 Ferraris and two Rolls-Royces—but only 11 cars were found on the premises.

Both Rolls-Royces were gone, as were two Ferraris. There's no word regarding how the family thinks they disappeared, but with limited interest in the cars, they organized to sell the remaining, restoration-ready Ferraris to a dealer, who has since reportedly found owners for the majority of the cars.

It's an ugly story with a less-than-happy ending, but considering how many times we've had to read about warehouse fires destroying collections of classics in 2019, sale and restoration is a relatively satisfactory conclusion to this tale.

The Jag’s windshield was shattered by the criminals who also trashed its hood and fenders, undoubtedly leading to an eye-watering repair bill.