The internet thinks this trucker crushed his boss's Ferrari over missed paychecks. The truth may be a lot more complicated. 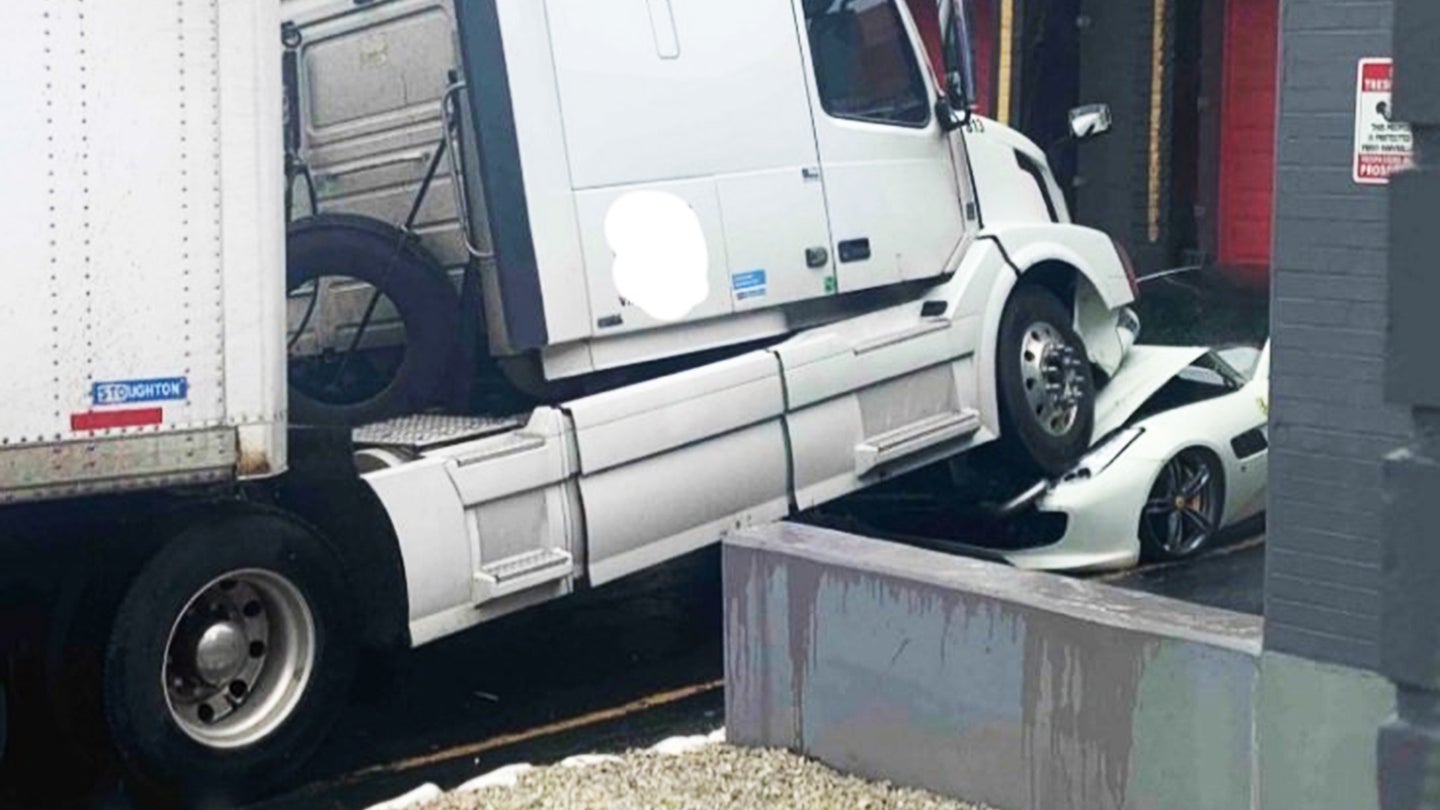 Of all the primal forces that drive what people share on the internet, few are more powerful than schadenfreude: German for "that joyous feeling you get watching another person's deserved misfortune." That is why these pictures have been making the rounds on social media and Reddit since yesterday: Who can resist gazing at a semi-truck that crushed a Ferrari in a purported attempt to get back at a terrible boss?

It's unclear where exactly the photos were first shared, but the outlines of the original story are unambiguous. The truck driver in question allegedly destroyed the Ferrari on Thursday after the car's owner—also the owner of the trucking company—stopped paying his drivers in the midst of an economic and public health crisis.

Such a delicious story quickly exploded, garnering tens of thousands of upvotes and thousands of comments across multiple Reddit threads. It was picked up by Carscoops and other outlets. It's also taken on a life of its own through Facebook trucking groups, where the image of the crushed exotic is being shared with a screengrab of a tweet that neatly summarizes the alleged story. It's kind of a perfect encapsulation of our troubled times.

Unfortunately for fans of neat resolutions, the fuller picture gets a lot messier. Several commenters on Facebook wrote that the Ferrari crushing actually happened following an argument between the driver and the company's owner related to truck assignments and performance issues. The Drive dug in and found the story only grows more complicated.

Using the photos, we managed to pinpoint the location: a trucking lot called Continental Logistics Services located at 2625 Gardner Road in Broadview, Illinois, a village on the outskirts of Chicago.

A manager who answered the phone there declined to give his name and denied knowing anything about it, while claiming that his own exotic car is unscathed: "I have Lamborghini, my car is OK... I hear some story that something happened, you know, drivers talk. But I don't know anything."

However, a source with the company and close to the owner relayed a full account of what allegedly went down on Thursday to The Drive. We should note that while we've been able to confirm with local police that this incident did happen—"It happened," a Broadview Police Department dispatcher said, laughing—additional details were pending a Freedom of Information Act request that has not yet been answered as of Friday afternoon. As such, the rest of the specifics remain uncorroborated by a police account.

To start, the source claimed the incident involved not Continental Logistics Services but a sister company using the same lot. The source spoke on condition of anonymity, citing pending litigation, and for the same reason declined to give any names.

He stated the semi-truck driver was hired remotely on Monday and completed only one load before issues arose with his behavior. The driver was then summoned to the Chicago facility to be fired in person, according to the source's information.

The source said the company offered to pay him for all his miles, reimburse him for the items he bought like a mattress and trash can to outfit his truck, and even give him a plane ticket to get back home. It was also allegedly pointed out that the ongoing demand for truckers meant it wouldn't be hard for him to get another gig. All the while, the source claimed, the driver kept asking to remain with the company and refused those accommodations.

Those talks, taking place in front of numerous witnesses, apparently broke down after a while, with the tipping point being a disagreement about how to shuttle the driver to a nearby Wal-Mart. At that point, the driver allegedly asked if the $260,000 Ferrari GTC4Lusso was the owner's. When confirmed, the source said the trucker replied "Now you'll see what happens when you fuck with me," ran towards an empty rig and started it up. The source added the owner gave chase and almost ended up under the wheels as the rogue driver charged towards his Ferrari and smashed his way up onto the supercar's hood. At that point, the owner called police.

Multiple truckers have weighed in on Facebook to say that the company in question pays its drivers fairly and on time. There are other second-hand bits of information that hold the driver was either fired for failing a drug test or upset over being given an older truck instead of a newer one.

We continue to dig into this story and we will update with any additional confirmation that we can obtain. If you know anything, feel free to get in touch.