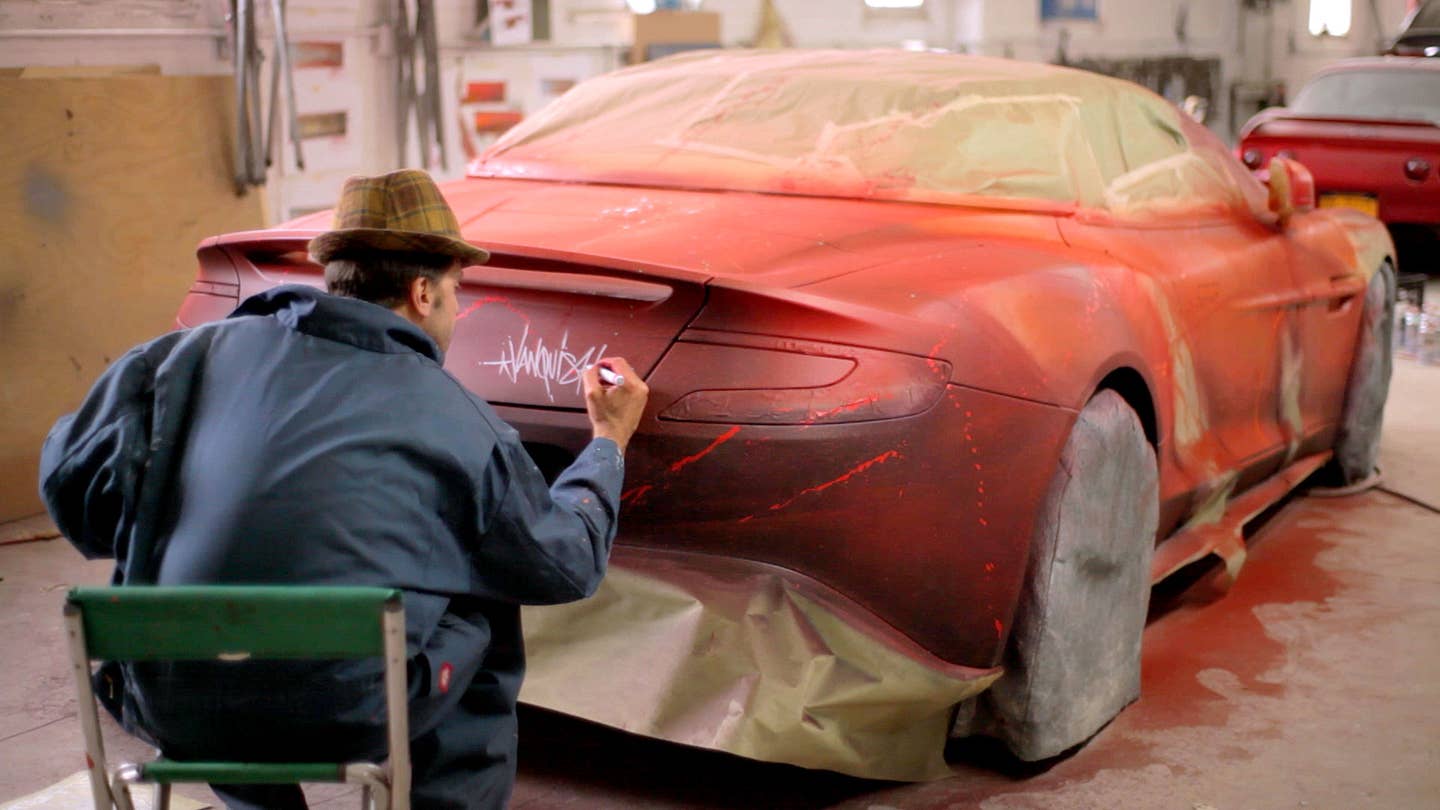 At first blush, Aston Martin and tattooing mix about as well as the Balvenie 30 and an Orange Julius. “The car is a work of art in its own right,” dapper Brooklyn-born graffiti and tattoo artist KAVES says as we stand over a brand-new Vanquish Volante. “How do you reinvent something perfect?”

It’s a good question. But KAVES has put his hand to it, layering the gorgeous silver drop-top with thick swaths of burnt orange paint, blood-red splatter and whimsical grey storm clouds. Portions of the car’s argent-coated carbon fiber skin peek through in lightning bolt patterns along the flanks and hood, enunciating its musculature. Much like a traditional Vanquish, it looks poised to erupt, and maybe eat your face.

“There’s not a flat surface on this car,” KAVES says as we walk around his creation. “So painting it, I had to tighten the body and work with the contours of the car, just like I would holding someone’s skin taut to create a tattoo. It’s different from working on a subway car.”

KAVES knows of what he speaks. A graffiti artist since the tender age of 12, he spent his youth spray-painting trains in the derelict New York of the Eighties and Nineties. His work then migrated to galleries and museums, and later, to commissioned work creating designs for corporations like Nike, Pony, MTV, Adidas, Gretsch Guitars and even vintner Georges Duboeuf, for whom in 2011 he created the label for their immensely potable Beaujolais Nouveau.

The Vanquish project came up through a conversation between KAVES and Marek Reichman, Aston Martin’s design director. “Marek wanted to have an art car, something tattoo-inspired, so he came to me,” KAVES says. “It’s that simple.”

Like with an actual human tattoo, all of this ink does not mask the car’s bold identity. “I drove it through some pretty rough neighborhoods in Brooklyn when I finished in my studio,” KAVES says. “Jaws were dropping. Kids 9 and 10 years old came running out into the street and recognized it—that’s an Aston Martin Vanquish—and wanted to take its picture.”

There was talk that the car would be auctioned at Art Basel this week in Miami, but an Aston representative suggested that an existing customer of the brand had come forward with intentions to purchase it.

The car’s special appearance takes Aston’s individualization process to a new high. (Q by KAVES, we joke, riffing on the name of the marque’s bespoke-design department.) We wonder if it’s a one-and-done project, or if there might be other Aston Art Cars to come.

“If you think of a car like this as a blank canvas that you commission, it makes sense,” KAVES says. “The car speaks for itself. It’s English intelligence with Brooklyn attitude. I just gave it the street credibility that graffiti communicates to the world.”