The Drive grills Aston's boss on what to expect from the tiny, terribly glamorous British brand. 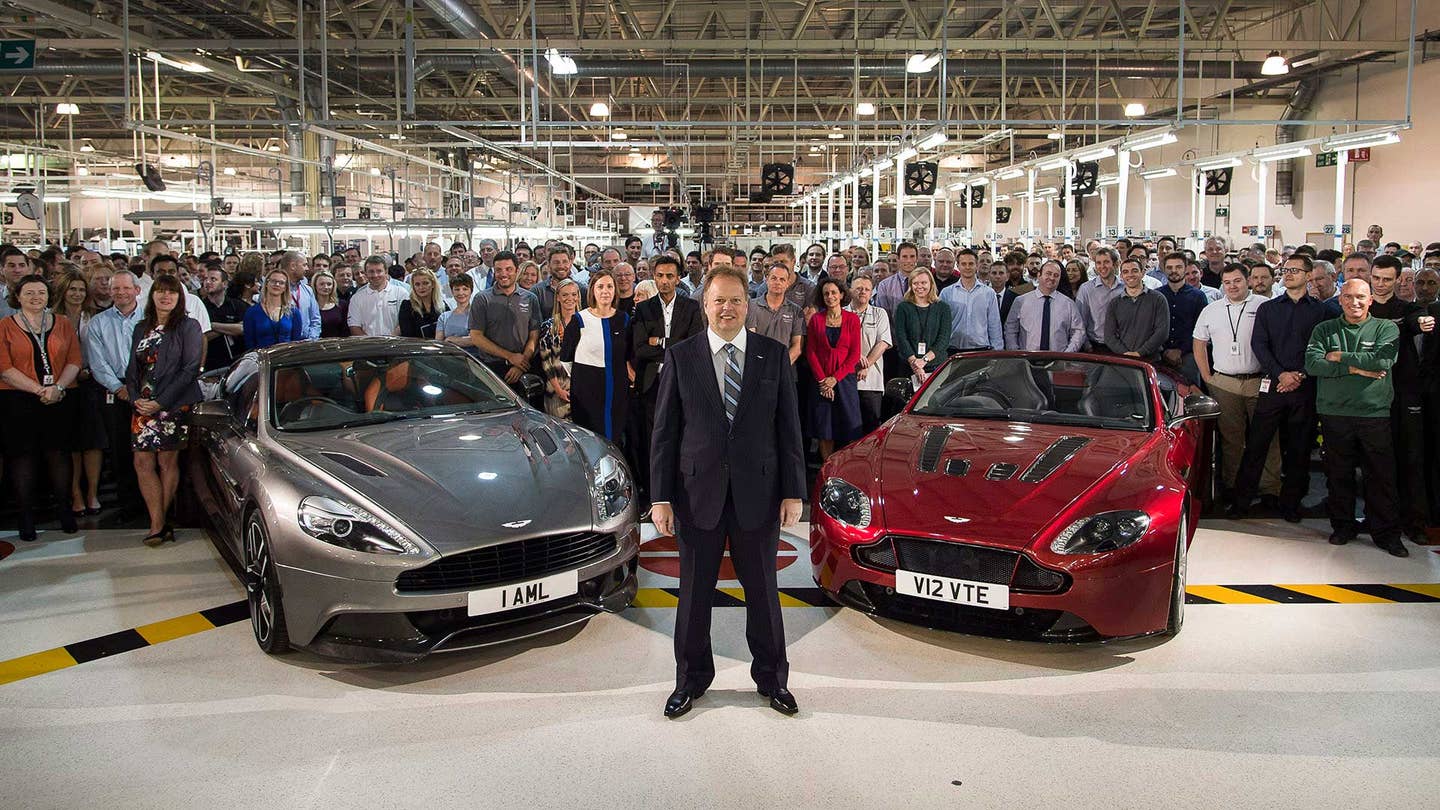 Andy Palmer draws a matrix in the air. “Let’s take versatility to focus on the X-axis,” he says, moving his index finger left to right. Then he bisects this line vertically. “And let’s take emotional to ugly—or, less emotional—on the Y-axis.”

He proceeds to fill in the dots. In the top right corner, beauty and focus, he decides to “be nice” and places the McLaren P1. And in the lower left corner, functional and “damned good” but not pretty, he places the Porsche Cayenne. Then he maps out the current Aston product line. “If you were to draw out our product range today, they tend to cluster together.” He gestures at the grid’s upper right quadrant. “We’re going to have seven cars in our range, and obviously if you’ve got seven cars you can’t have them cross-shopping between each other, because then you’re in a very small space. So you have to push where you want to go.”

Where does Palmer want to take the venerable, boutique British sport luxury brand? The short answer is, all over his map. But for starts, he believes that “there’s a place for a versatile, beautiful car. The top left corner.”

Aston’s brand statement, which Palmer inherited, and in which he firmly believes, is Power, Beauty, Soul. And in his opinion, a straightforward SUV doesn’t fit into this holy trinity. “Practically speaking, every one of our customers has a Range Rover sitting in their garage. So the sensible decision would be to make a Range Rover. But our DNA doesn’t allow us to go there. There is no beauty in there. You cannot make a beautiful SUV, it’s impossible. Because the raison d’être of an SUV is basically maximizing versatility, maximizing space, which means you make a box. And boxes aren’t beautiful.”

The other big topic currently confronting Aston is how to move its technology out of the 20th century without sacrificing the Old World, almost anachronistic charm that distinguishes it and its hand-built products from other options.

Aston has teamed up with Mercedes-Benz (the German brand bought a small equity stake last year), arguably possessor of the most sophisticated driver assistance tech on the market, to provide what Palmer calls “electrical architecture.” This doesn’t mean that the new Aston models will suddenly possess the suite of Mercedes Intelligent Drive functions that basically allow the brand’s flagship S-Class to drive itself.

“We’ve made the conscious decision that an Aston is a driver’s car, so we won’t have that full array, even though we could apply that full array,” Palmer says. Instead, Astons will offer á la carte selections from the broader Mercedes menu. “Automatic parking of a supercar makes a lot of sense, because they’re damned difficult to park and, I mean, you curb a wheel and it’s a thousand bucks,” Palmer says. “And we could potentially have a semi-autonomous DB9 replacement when we launch. And some guys say we should because they’re damned expensive cars. And I would say we shouldn’t. Because it’s a damned expensive car, and it’s a damned expensive car because it’s a driver’s car.”

This is not meant to be interpreted as a retreat from technology. Simply, according to Palmer, that the tech must serve the brand’s purpose. “There’s stuff in there that I would say, we’re going to choose to be the laggard. You know, lane control! Jesus! That’s why you have a driver.”

In other realms, Palmer says, Aston would like to be tech-forward. “I’d also like to make some choices on some stuff in those technologies where I can lead the pack. I, slightly tongue-in-cheek, joke about the ‘drift mode’ button. I mean, that would go perfectly with us in terms of autonomous control. Hit the button, the car goes into drift mode. Wouldn’t that be spectacular?”

Finally, we get around to discussing the solid golden elephant in the room, the brand’s recently unveiled, ultra-luxury Lagonda Taraf sedan. Thus far, Aston has said that the superb four-door, of which only around 200 will be produced globally and each of which will cost in excess of $1 million, will be available only in the Middle East and China. But Palmer now hedges. “Why not have a few of those running around in the United States of America?” he teases. “And we will.” (Our sources indicate that this will occur not through Aston’s direct export to the U.S., but through American customers personally importing the car and registering them via the Department of Transportation’s “show and display” designation.)

"Hit the button, the car goes into drift mode. Wouldn’t that be spectacular?"

We would relish that. The Taraf pays handsome homage to the outrageous William Towns-designed Lagonda sedan of the Seventies and Eighties, a car with such overreaching attempts at technology—touch sensitive switches and a cathode-ray tube dash, in 1976—that you can understand how the brand would be frightened off electronics for decades.

Just the day before our chat with Palmer, legendary car designer Peter Brock—he penned the Corvette Stingray and the Shelby Daytona Coupe—had popped by to look at the Taraf. Palmer proudly reads us Brock’s comment on the car, which the CEO tweeted. “Sedans are the hardest cars in the world to make look beautiful, but the Lagonda just knocks it out of the park. There’s no other car that gets close to the Lagonda. It puts everything else in the world in the shade.”

Given the possibility of a Taraf coming to America, we ask to put our names on the list to be one of the first to drive it. Palmer chuckles. “I drove it up the hill at Goodwood,” he says, referring to the Goodwood Festival of Speed, a race up the steep, baronial driveway of an English Lord’s estate. “And I had it sideways at the first corner.”

Maybe that drift-mode button would be superfluous.