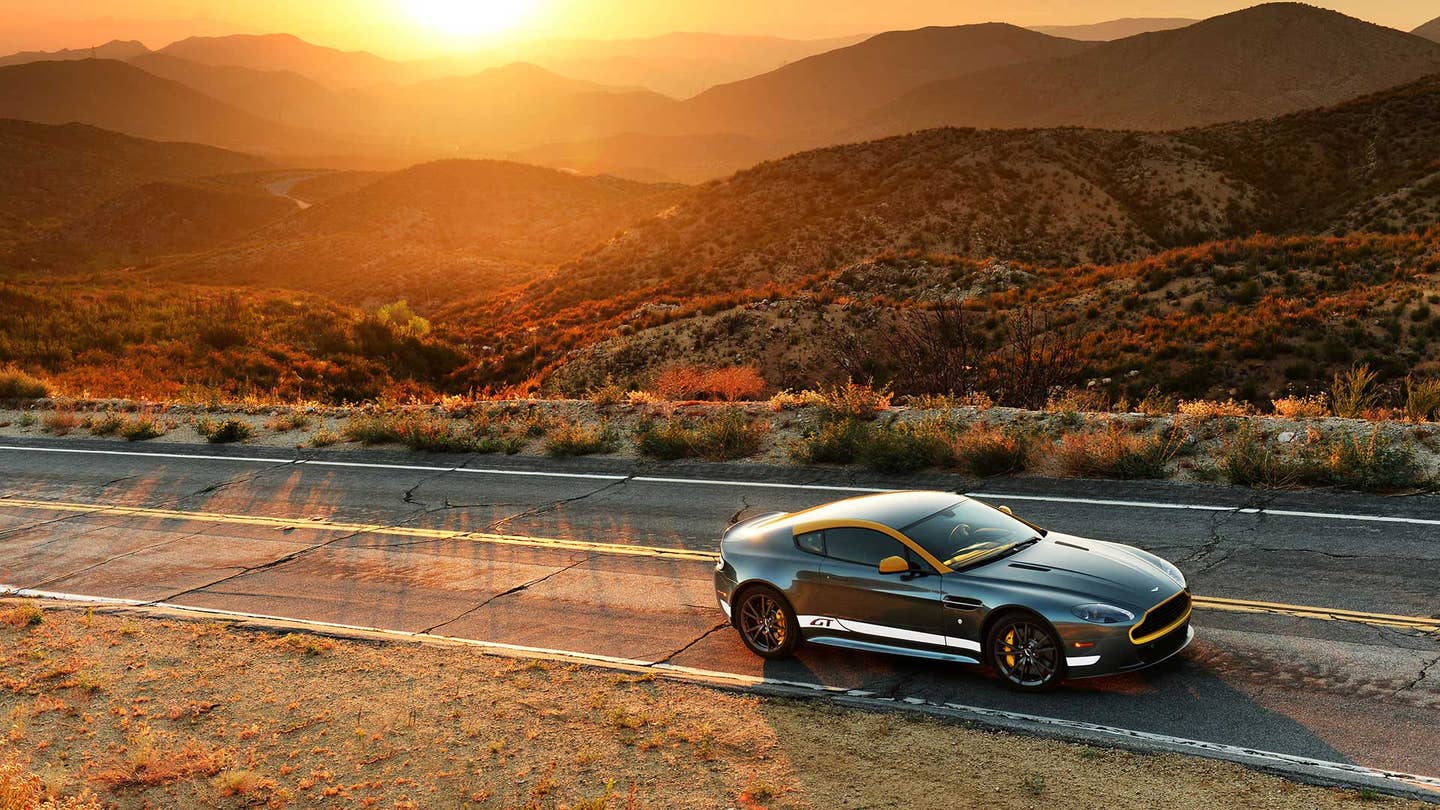 This is the Aston Martin V8 Vantage GT. It is a stripper model with plenty of substance, a new thing that’s incredibly old, and a fast car that’s better driven slowly. It’s also the only vehicle Aston Martin currently offers with a manual gearbox. Ian Minards, Product Development Director, says this car is “about bringing track-honed excitement to the road in an accessible, emotionally engaging, and authentically ‘analogue’ way.”

No, that’s not indigestion. It’s your cockles burning up.

The V8 Vantage is a dinosaur. Its bones, Aston Martin’s VH platform, a lightweight bonded aluminum and magnesium structure, have been around for a decade. Its engine, a quad-cam 4.7-liter, has roots in Ford’s mid-Nineties occupation of Jaguar. Logically, there’s no reason this car should be on sale today, much less competitive in the super sports stratosphere. But here we are, new variant in tow. Paläoweltschmertz be dammed.

The GT exists so that you, Guy In Cargo Shorts, can actually almost really maybe afford a piece of the paradox. The hardtop starts at $99,900, the roadster $114,400, roughly $20,000 less than a regular V8 Vantage. Hardly chump change, but a stone’s throw from Z06 Corvette territory, relatively speaking. Also, the cheapest Aston since the Thompson Twins were touring.

In the GT, you get doofy accent paint and less standard equipment, but retain the same dry-sump engine from the V8 Vantage S. Output is unchanged at 430 horsepower and 361 pound-feet. And, yes, that runs to the rear wheels via six-speed manual gearbox. A seven-speed automated manual is optional. Don’t.

“It is a deeply, deeply flawed car,” a colleague said before handing over the keys. “Damn near perfect.”

That first bit is immediately apparent. Clutch take-up is absurdly high, shifter placement awkward. The suspension is non-adjustable and incredibly busy. Hustling through a decreasing radius, grip levels feel limited by the chassis, not tires. Keeping the V8 in its sweet spot takes work, and the iron-rotor brakes aren’t phenomenal. Nothing is, actually. So you give up trying to drive the Vantage GT like an F-type or Audi R8 or AMG GT-S or Nissan GT-R. Stop hucking it around, wringing its neck, chasing some imaginary, Porsche-shaped ghost that’s running away. You stop rushing and just drive the thing hard. Physically, deliberately, a few paces behind what we’ve come to expect from a six-figure sports car. And then you don’t want to get out.

Everything’s arranged purposively, for dictating that tempo. The upward-swinging doors, which bang against their hinges when opened too quickly; the crystal key fob, which has to be pushed and held in the ignition slot for several seconds to fire the engine. Heavy controls, fly-off handbrake, double-take styling. Hurrying isn’t an option here. It’s wonderful.

This car makes you think, too. Process and react to information from meaty, hydraulic steering; choose the right gear, because peak torque arrives at 5,000 rpm, and there aren’t any induction tricks to hide the megaphone curve. There’s a strange charm to it, nostalgia for moments still unfolding. The V8 Vantage GT, the most basic form of basic’s old guard, a functional fossil, drags up a difficult question: Are you better off driving now than you were 10 years ago?