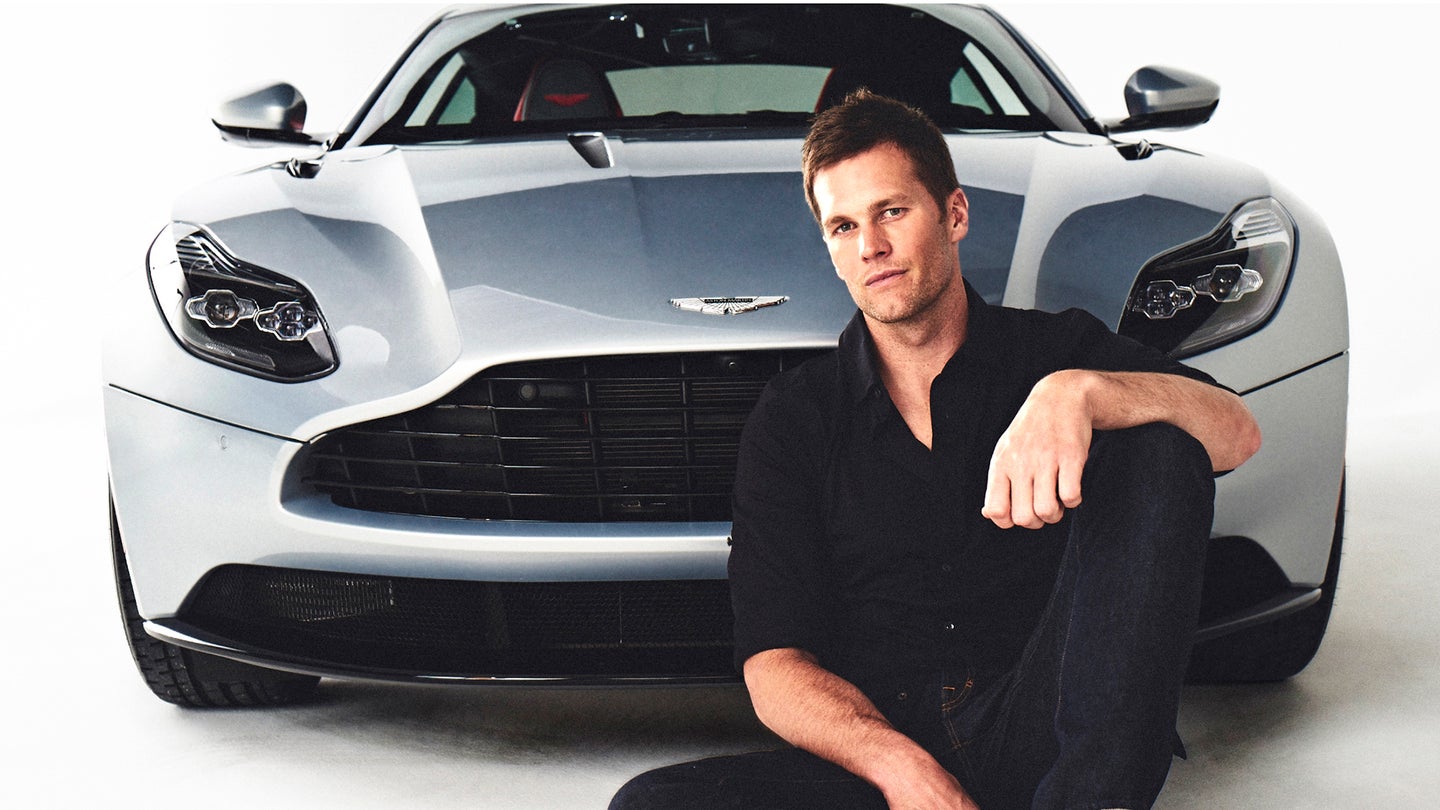 As we at The Drive awoke this morning to news spreading everywhere that Tom Brady had announced a sponsorship deal with Aston Martin, I couldn't help my thoughts turning to poor Peyton Manning. Somewhere in Tennessee, a bathroom mirror was sadly reflecting the Peyton face, yet again. Don't get me wrong, the older Brother Manning has lead a better life than most men will ever dream of...but this one's gotta sting. Peyton is an athlete best known for two things: 1. Desperately underachieving in the playoffs; and 2. Shilling cardboard pizza, insurance, DirecTV, Gatorade, and Buick. The idea that Tom Brady—Peyton's arch-rival in every way possible—was partnering up with one of the most esteemed luxury brands in the world must just be another slap of cold, soggy Papa John's to the face.

As an unrepentant fan of both the Golden Boy and Aston Martin, the partnership seems almost too good to be true. Brady, one of the most famous athletes on the planet, could have partnered up with any automotive brand he fancied—and by choosing to pair up with Aston, he all but certainly left piles of cash on the table. But just like he has done with contract after contract with the New England Patriots, taking far below market value so the team could field a top-notch squad around him, Brady all but certainly took some sort of discount for the British automaker.

We must guess with the independently owned, cash-strapped Aston Martin, Brady once again left money on the table so he could choose a brand he wanted to work with. In other words, he opted for an authentic partnership rather than aligning himself up with the highest bidder. You can say all you want about him, but even his biggest detractors have to admit that for Tom Brady, money has never been the top priority. Surrounding himself with the right people—and the right brands—has.

That’s certainly not to say all of Brady’s endorsements are beyond reproach. Like his less-than-pristine Super Bowl record against the Giants, there are head-scratching moments in Brady’s sponsored past. Recently, he’s been seen in a Beautyrest Black mattress commercial, clad in turtleneck and blazer and stroking a dimpled chin while contemplating bedding as if it were a Rodin encased in the Louvre.

Then there’s Brady's dubious-at-best association with Ugg, the Australian slipper maker best known for sheathing the yoga-attending toes of Hollywood’s most annoying millennial celebrities. There is no greater gift that Tom Brady has given fans of the Broncos, Ravens, Jets and Dolphins than those images of himself besotted in puffy furry boots, petting a floppy pup. (Sit. Good boy.)

But there are earlier hints of these types of unorthodox partnerships. When Brady left Nike for Under Armour in 2010, he took equity in the exploding sportswear company in lieu of cash. At the time, UA was only 5 percent the size of the Swoosh; now it’s overtaken Adidas as the second-largest sports brand in the USA. His shares in the Maryland-based company have grown tenfold in value. Then there’s his ambassadorship with Tag Heuer, the esteemed Swiss watch maker—another luxury pairing far elevated from the world of sports drinks and canned soup that define so many of his peers.

And what of his long-standing but quiet relationship with Audi? Remember that S8 he was driving in 2010 when a driver ran a stop sign, T-boned him, and sent the occupants of the Mercury Villager minivan to the hospital? Brady walked away unscathed, giving Audi the best free publicity they’ve ever scored. So you know the Greatest Living American could’ve most likely gone with the deep pockets of the Four Rings had he so opted.

So it kind of makes you wonder…why Aston?

“The whole thing sort of happened organically; there was a bit of mutual affection and respect,” says Laura Schwab, president of Aston Martin America. “The first thing he said to me when he saw the DB11 was, ‘God, is that car beautiful!’”

As marketing & communications officer Matthew Clarke recalls, Brady originally met chief designer Marek Reichman and a conversation sprung up, from which the mutual respect only grew. “We shouldn’t speak for him, but I’ll just say he wanted to do it. He could’ve had his pick of automotive brands and he chose us, so I’d just say that’s a sign he’s genuinely interested in Aston.”

“Tom occupies a very unique space in the sports world, and we like to think we occupy a very unique space in the automotive world,” continues Schwab. “Every car is handbuilt, every vehicle has seven coats of paint, hand-painted. We don’t follow every convention, for our 104 years of history. And he’s gone about his life the same way as well. It makes me think, who else would he have picked?”

As part of their partnership Brady will be spearheading a campaign called "Category Of One," the exact contents of which are still up in the air—but you can expect a series of commercials, videos and the lot. Moreover, Brady will be pushing the recently released quarter-million-dollar DB11 and will be designing a limited edition Vanquish S—but only 12, as in his jersey number, will be made. Rumors say it will include a unique paint finish of TB’s choosing, but no word yet on whether it’ll come with matching Uggs.