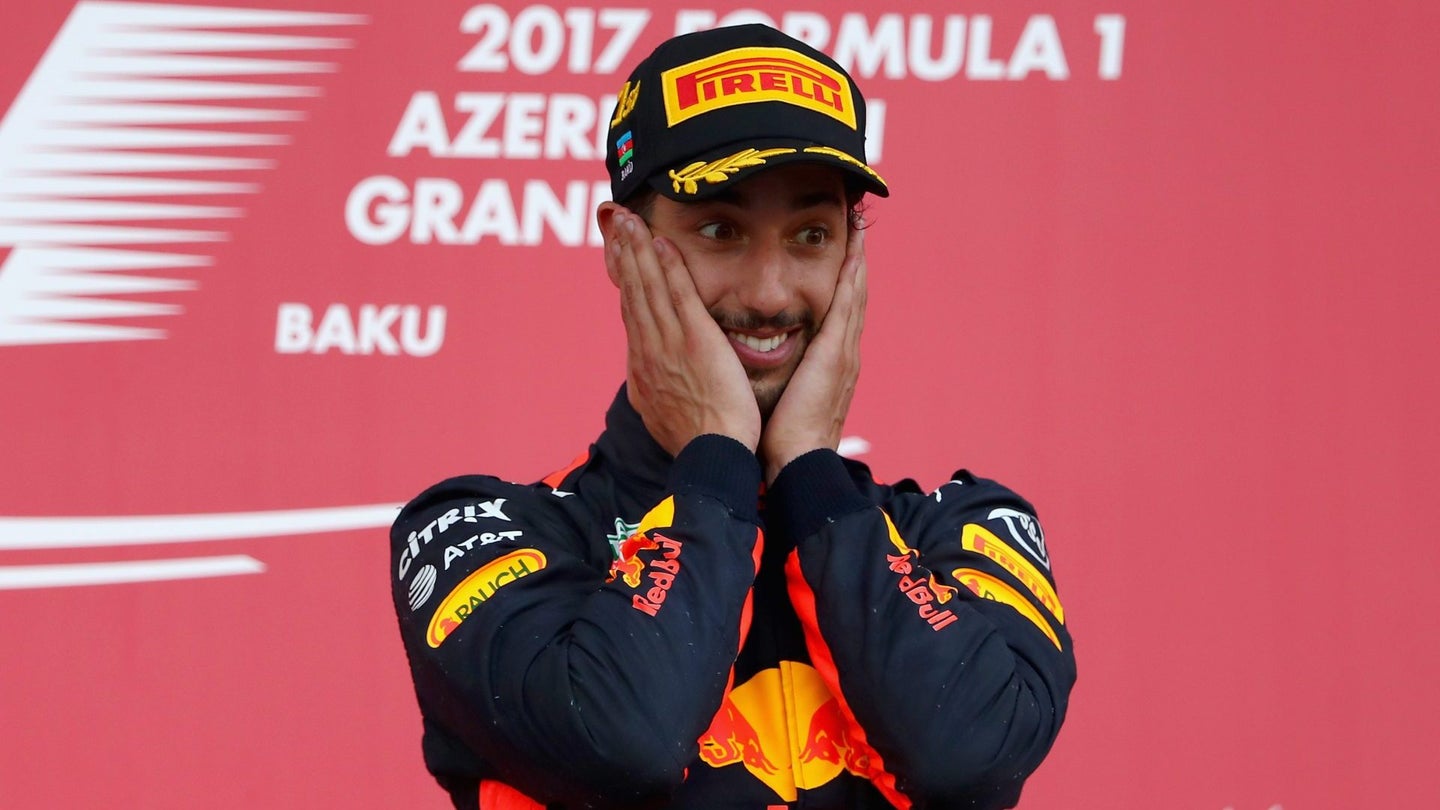 The Formula 1 world has wondered where Daniel Ricciardo will be in 2019 for months now. His current team, Red Bull Racing, has not yet recovered the dominance it lost with the V8 engines after 2013, scooping up the occasional scraps left by Mercedes and Ferrari since 2014. Ricciardo's talents—reestablishing themselves in China—are too valuable to be left to stagnate at a team struggling for competitiveness.

Latest word alleges that Ricciardo may have an exit strategy. Motorsport Magazine, well-connected within the F1 paddock, reports that its sources within Red Bull Racing know Ricciardo has signed some sort of contract with a team that is neither Red Bull nor Mercedes. The publication points to Ferrari as a target for Ricciardo, as Kimi Räikkönen is on a one-year contract extension, leaving his seat up for contention by any and all seeking a move to a more competitive team. It is alleged that driver and team have agreed not to negotiate with other parties until June 30, with money changing hands as part of the accord. Until that date, they may only look to each other for solutions to their 2019 problems.

Ricciardo is free of his contract at Red Bull after 2018, and with Ferrari's stronger record (since 2015), Maranello looks ready to knock Mercedes off the throne.

The Drive wishes to point out a second option for Ricciardo: Renault. Nico Hülkenberg is tied to the team, but Carlos Sainz Jr. is being borrowed from Red Bull's program on a one-year deal, according to SkySports. His seat is up for contention, as much as Räikkönen's, and it may be as valuable in the near future. Renault, since its 2016 reentry into F1 as a factory team, has not been in a position to challenge for Grand Prix wins, or even podiums with any regularity. The team intends to draw even with Red Bull in 2019, according to Motorsport, and surge onward to race wins in 2020.

Renault may plan to leapfrog the leading teams with the aid of one former FIA technical director it scooped up in 2017, who knew of every trick in use by the winning teams as of last year. While the French team wants to cease investment in its current F1 engine, Renault cannot ease up if it is to reach its ever-soaring target of success in F1. Ricciardo may too see the value in the Renault seat, so let us not count the Enstone team out just yet.

The Drive reached out to Red Bull Racing for comment about Ricciardo's alleged contractual dealings and will include an update when we hear back.