Go inside what really happened that fateful morning in Malibu. 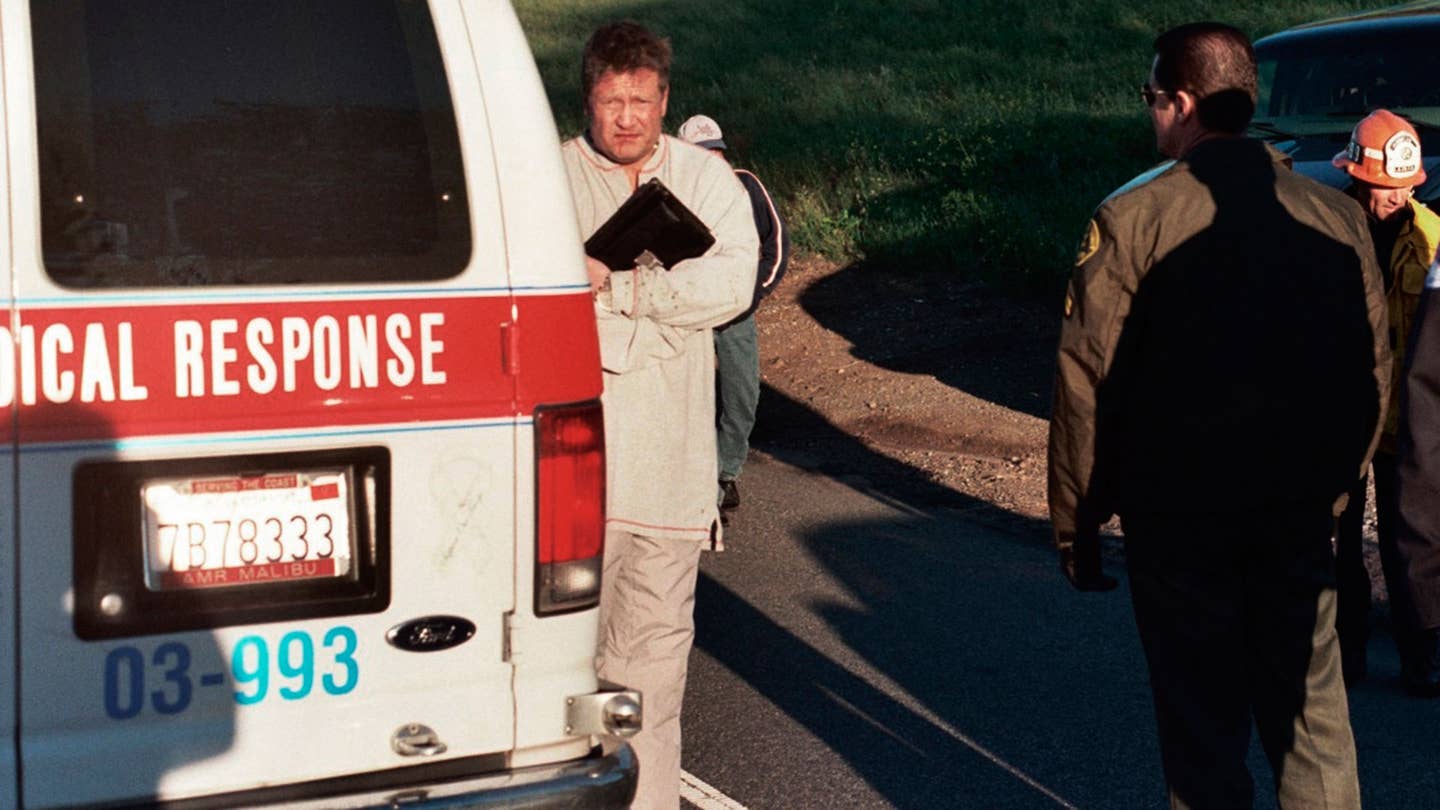 It is the story of drugs, sex, organized crime and a lot of great cars. This is the stunning conclusion.

Stefan Eriksson isn’t the one-dimensional thug some journalists paint with broad strokes. What made Eriksson successful was his ultimate undoing; the larger-than-life persona and Sybaritic ebullience that brought him his riches, notoriety and nimiety were the flipside to the arrogance and excess that brought his world crashing down. For if Stefan had only crashed a Porsche GT2, or even a run-of-the-mill Lamborghini Gallardo, instead of a seven figure Ferrari, he would not have attracted the global attention that eventually tipped off that bank in Scotland and launched an international investigation. Had he been driving 100 mph, instead of 190, it’s unlikely the accident would have even blipped the LA local news radar. No, it was his grandiose personality that delivered, and then mortgaged, his volcanic success. Taken to such absurd levels, it had to implode.

On April 6, 2006, six weeks after the Enzo crash, it did. Police raided Eriksson's Bel Air home and arrested him on weapons charges, grand theft auto, drunk driving, cocaine possession and suspicion of embezzlement.

“I get a phone call that Stefan’s house is being raided by the Sheriffs, FBI and Interpol,” remembers Anthony of day the party finally died. Although he feels cheated and exploited by Eriksson, there is a chord of pity to his tone. “So I rushed over, and they had Stefan in the middle of the hallway, handcuffed to a chair, with armed police officers guarding him. He was shattered; I’ve never seen him look that pathetic.” He was facing 14 years in prison before a November 3, 2006 mistrial was declared due to a deadlocked jury (10-2 favoring conviction). Eriksson eventually accepted a plea bargain, pleading no contest to two counts of embezzlement and one count of illegal gun possession, and in exchange was sentenced to three years in jail and deportation. He was released from prison on January 21, 2008, and deported to Sweden, but his freedom was short-lived.

On March 30, 2009, Eriksson was arrested in Stockholm on charges of extortion, aggravated assault and aggravated theft. Court papers charged that Eriksson and seven others illegally prepared to access the property of a woman named Daniela Kovacs with intent to unlawfully acquire artwork, appliances, furniture, clothing, shoes, televisions, video game consoles, and jewelry, with a total value of 1 million crowns (about $100K) — a felony due to the amount stolen. In court papers, Daniela Kovacs’ boyfriend is also named as a victim. And who was Kovacs’ boyfriend? None other than Peter Uf —Eriksson’s former mate from his days in the Uppsala Mafia, his accomplice on the boat, and allegedly one of the two men who presented themselves as Department of Homeland Security agents the morning of the Ferrari crash. From the Kovacs and Uf household, Eriksson’s accomplices seized a Rolex box, headphones and game console. The console? A Gizmondo, of course. On July 10, 2009 Eriksson was convicted and sentenced to 18 months in a maximum-security prison.

The story of Gizmondo is a modern Wall Street adaptation of the fable Death in Tehran, only instead of an Arabian steed of the purest blood delivering death to the protagonist’s door, a shattered Ferrari Enzo played vessel. But the result remains the same: the more you try to outrun your destiny, the more you speed towards it.

“You gotta be really stupid when you crash a million dollar car you’re driving at almost 200 miles per hour, drunk, with a gun and cocaine, and documents you’re not meant to have, a police badge you’re not supposed to have, you’re not a citizen, you don’t even have a visa, you have a criminal record, and you don’t even leave the country. These guys were so stupid they thought they could get away with all of it,” scoffs Anthony incredulously. “And the worst part is, they videotaped the whole thing, the entire night of racing. How stupid do you have to be?”

“Pardon me,” I ask, flattened by his innocuously delivered last statement. “They videotaped the whole thing? How do you know?”

“’Cause we got the tape, man,” says Anthony, smirking. “And better yet, I can show you.”

For days I sit idly by the phone, waiting for a call from Anthony that would connect me with the men holding the DVD in question. As the days stretch in silence, I grow more skeptical of the disc’s existence. Could Eriksson have filmed his entire night’s vehicular debauchery, and then save it? Is he that reckless? Many conversations were required to convince our sources to prove the tape’s existence, but their resistance—and fear—is understandable. If the disc were to fall into the wrong hands, all responsible would be in peril.

A week later, I’m sitting in the reception area of a downtown high-rise. The holders of the disc have reluctantly agreed to play it for me, and thus the meeting in this dusty art deco building. One of Anthony’s colleagues arrives and gives me the once-over. He’s clearly not convinced he should play a stranger the video, but Anthony told him to, so he leads me down several halls into a windowless room, slips the DVD into the player and sits down next to me.

From the interior of a car, a clock reads 5:39 am on the bright dashboard display. The odometer marks 2220 miles, and the car is blurring past crashing waves in the inky black of night at 153 mph. There’s a full tank of gas. The driver is in 5th gear, and the galloping horse of Maranello is luminescent behind the speedometer. We're in a Ferrari.

Through the windshield, we can see the Enzo zooming up the Pacific Coast Highway entering Malibu Village. Someone is giggling like a schoolgirl.

“We’re James Brown, bitch!” Someone yelps in a thick brogue, the ubiquitous Dave Chappelle line time-stamping the tape around 2005. Could it be the voice of one Trevor Karney, the Irishman police found on the PCH next to the shell-shocked Eriksson and his disemboweled Enzo?

A police cruiser suddenly appears from the opposite direction. The only thing that saves the Enzo from being pulled over—guns drawn—is at that precise moment a large U-Haul truck passes that completely obscures the speeding supercar from the policeman’s view. Obscene timing. Normally one would say they got lucky, but knowing what’s on the horizon it makes you wonder how things would’ve turned out had they actually been stopped then and there.

“Take it easy for a few minutes, there’s always a lotta police around here,” warns the Irish voice as they blast past the Surf Hotel, past a silver Mazda Miata. They take it easy for all of 30 seconds before the pedal is dropped and they storm up the hill towards Pepperdine University. The wind howls louder and louder. The passenger’s hand motions left like a rally navigator as a minivan desperately tries to get out of the way in time.

Suddenly, spookily, there is a blip in the film. A brief ghost-like sighting. We rewind it and play it frame-by-frame, catching a one-second shot of what appears to be Stefan. The person in the frame is huge, so big he’s folded into the Ferrari, hunched over, skull mashed against the headliner. He’s wearing a grey thermal undershirt, red stitching. Short cropped hair, almost a crew cut. Circling his neck is his famous gold chain—not a necklace, mind you, but a proper chain made out of gold. Like the kind used to padlock bikes in sketchy neighborhoods.

As the clock reads 6:04 am they’re bulleting up a much lonelier stretch of the PCH. Morning has broken, and the sky is a deep purple in color, no longer tar black. In the light, silhouettes of palm trees emerge on either side of the road. The massive 6.0-liter V12 wails loudly behind the cameraman's seat, and the speedometer is clicking up at a frightening rate: 185, 190, 196…

Then the camera focuses ahead as the engine revs faster and pitches higher. The Enzo must be going at least 200 mph as it approaches a grey pickup truck to their right; they pass it like it was parked.

Foreboding little bumps in the road jolt the camera violently—premonitions of what’s to come. It’s like a scene from some found-footage horror film, lo-fi and bone chilling. Stefan charges with high beams continuously on—selfish and self-absorbed till the end.

“This is a 35 mph zone—I got [pulled over] going 120 here. And I never went to court for it!” laughs the Irishman. “It just worked out for me,” he intones smugly, completely oblivious to the cold irony his blood-red Ferrari is speeding towards.

T-minus 90 seconds till complete disaster. There’s something uncomfortably perverse in going through the tape frame-by-frame, something morbidly voyeuristic in watching these two barrel toward their doom.

The Enzo cuts like a wraith along that dark coastal highway, around the next bend into the Lost Hills of Malibu…

Even at 200 miles per hour, the elegant Italian machine still finds the juice to accelerate further, and arcs a light bend in the road. Even on video, you can feel the g-forces in your gut. Even knowing the future, you feel their sense of invulnerability. The confidence.

When suddenly, there is a frighteningly loud zip and a sternum-crunching thump. A gasp of air, a blur of light.

Then, there is only static. And silence.

It’s all over now. And you say to yourself, there’s no way somebody could walk away from that.

But of course, they did.

In March of 2008, Eriksson was re-arrested in Sweden—only a year after being deported from the US after pleading no contest to charges of embezzlement and illegal gun possession. After trial in Sweden, on July 10, 2009, Eriksson was convicted of extortion, theft and assault, and was sentenced to 18 months in a maximum-security prison. Yet this sentence was for a completely unrelated crime—all involved in the Gizmondo collapse escaped legally clean and free from a debacle that destroyed a multination corporation, and fleeced hundreds of millions of dollars from investors. Additional updates are needed.

To read the previous chapters of the Weird, Wild Saga of Gizmondo, click here.