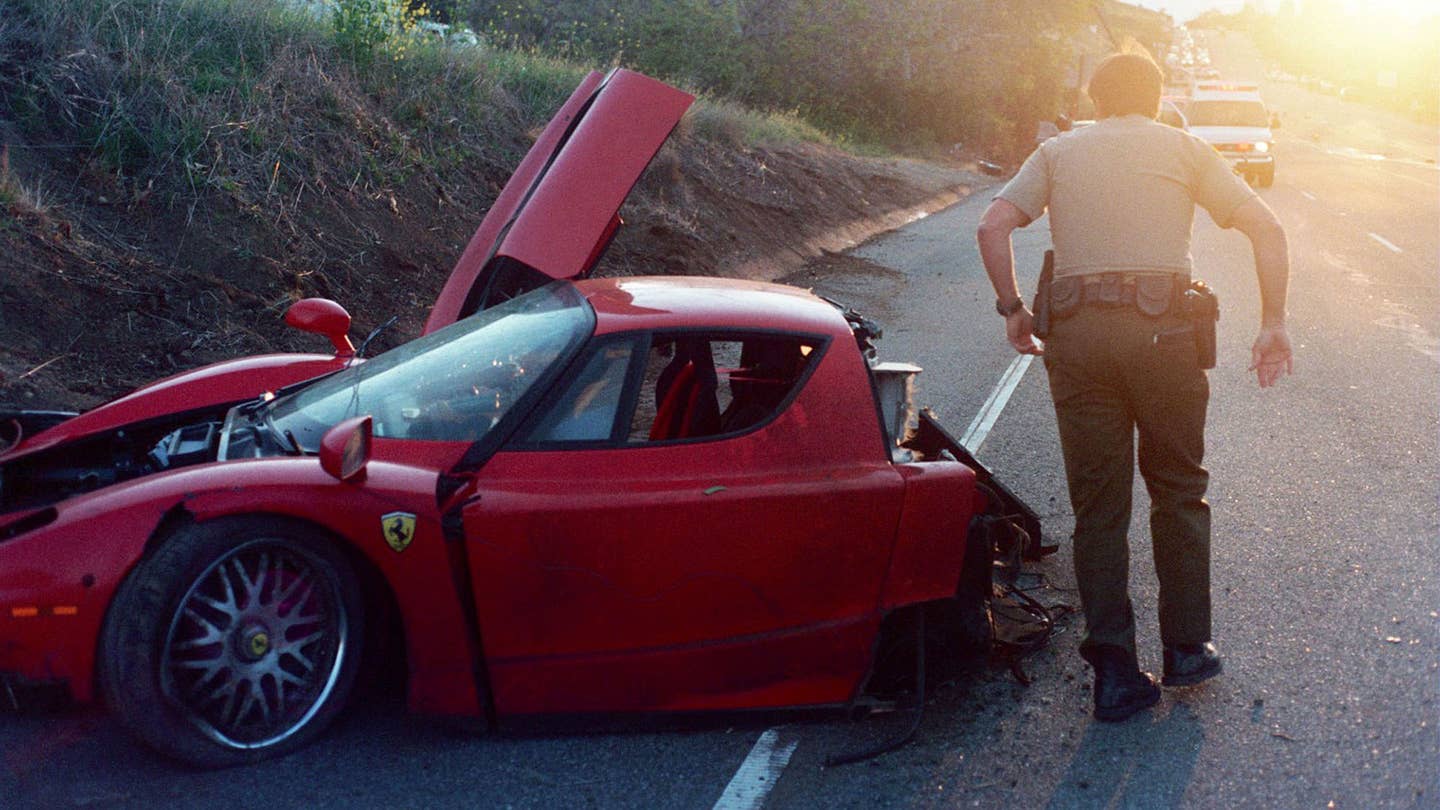 It was an unprecedented multinational scam that burned investors from London to Los Angeles. How did a Swedish gangster end up overseeing a billion-dollar tech firm? And where did all the money go? Read The Drive's 7-part series to find out how a late-night car crash in Malibu led to the collapse of a shady Swedish syndicate.

Part One: The Hand-Off

In the early dawn of February 21, 2006, on an empty stretch of Pacific Coast Highway just north of Decker Canyon in Malibu, the remnants of an eviscerated Ferrari Enzo lay scattered across 400 yards of warped steel, rubber, and shattered glass. The engine spilt like innards across the asphalt. Sliced in half when it hit a power pole at over 190 mph, the million-dollar supercar was unrecognizable except for the carbon-fiber driver’s compartment, still intact and a stark illustration of the engineering’s hefty price tag. Inside, the deployed airbag was spattered with blood.

The driver was nowhere to be seen.

“The crash was so loud I was completely jarred awake,” recalls Sarah Kelsey, a Malibu nanny and one of the first witnesses. A local TV news reporter interviewed her later that morning. “It was around 5:30 or 6, and I just heard this horrible, loud noise—I thought it was huge garbage dumpsters rolling down the mountain. It was so loud I didn’t even think it could be a car crash.”

As the Enzo lay on the road, Officer David Huelsen of the Los Angeles County Sheriff’s Department started piecing the scene together even before the sun came up. The task was made all the more difficult by the alleged passenger, whose story defied logic. Stefan Eriksson, a mountain of a man, sat visibly agitated on the curb, head in hands. Eriksson was a director of the collapsing company Gizmondo Europe Ltd. That may have weighed on his mind as he sat in shock. He said he was the passenger in the now-wrecked car, and claimed the driver was a German named Dietrich who had run into the surrounding hills after the crash. There was a third man at the scene, an Irishman named Trevor Karney, who further complicated the situation. Karney told Officer Huelsen he’d stopped as at the scene to see if anyone survived. The driver of his car, Karney said, left the scene and stranded him there.

The idea that two men would be found at the scene of a two-seat, single vehicle accident, and that both would claim to be passengers, was met with skepticism. Still, officers were dispatched into the hills to search for Dietrich.

“At 7:30 am we still couldn’t leave the house because there was a huge piece of car stuck in our gate, blocking our exit—I think it was the hood,” said Kelsey. “The whole highway was closed off, and I could see policemen climbing in the mountain, searching things out. And I remember thinking, ‘That’s weird, what are they looking for up there? Pieces of the car?’ It was incredible to see how far fragments spread out.”

As Officer Huelson was interviewing witnesses, a blacked-out Hummer H2 rolled up. Two men in suits leaped out and started flashing what appeared to be Department of Homeland Security badges. They claimed jurisdiction and insisted on an immediate interview with Eriksson. Huelson, taking a "don't mess with the DHS" mindset, obliged.

Inside the blacked-out SUV, the interrogation began. The cops were confused. What if these DHS agents weren’t agents at all? What they were conspirators removing items of interest from the crime scene?

The officers observed Eriksson in an agitated state. It turns out that he also had a notorious affection for cocaine. There has since been speculation that narcotics were involved in that night’s activities. Witnesses claimed to have seen a Ferrari Enzo speeding around LA earlier that night at 160 miles per hour. Eriksson blew over the blood-alcohol limit on a breathalyzer test administered nearly two hours after the crash). There are also theories that there were weapons in the car. One of the witnesses to arrive on the scene, and who allowed Karney to borrow his mobile phone just moments after the accident, later reported finding the loaded clip for a large caliber handgun stuffed under his seat—possibly stashed there by Karney in the post-accident chaos.

According to other reports, Eriksson handed over an Austrian-built .40 caliber Glock pistol to the agents in the black Hummer. What other evidence could they have collected?

In the confusion, the Sheriff’s Department screwed up the investigation from the beginning. Why did they release Eriksson, despite the fact that he was the only participant in a horrific high-speed accident that totaled his car, which was traveling between 140 and 190 mph, and then failed a Breathalyzer test? Few Angelenos would escape arrest with an alibi as laughable as his. They could have also arrested him on a litany of other charges, including DUI, reckless driving, possession of illicit drugs, felony weapons possession, and illegal street racing in a residential area. Finally, because Scotland's Capital Bank claimed that the car belonged to them, and that Eriksson had illegally imported the cars to America and then stopped making payments—well, add to the list grand theft auto and possession of a stolen vehicle.

It is meaningful that Gizmondo would punctuate its demise with a car crash, as cars figure into the genesis of this story as well. What propelled Gizmondo—a company best known for the spectacular failure of its lone product—into existence was the relationship between Eriksson and company president Carl Freer.

In the late 1990s, before Gizmondo existed, Freer ran a luxury car dealership and importer in Monte Carlo. According to court records, around this time Eriksson was leading a criminal outfit, dubbed the Uppsala Mafia, outside Stockholm. He had already been convicted and imprisoned for weapons possession, cocaine distribution, assault, counterfeiting, and fraud charges. Apart from extortion and drugs, the Uppsala Mafia also dealt with stolen cars. Freer was later convicted in a Stuttgart court for using bad checks to buy four luxury cars in 1999 and sentenced to 18 months probation and fined 200,000 euros. Freer claims he canceled the checks when he suspected the cars were stolen.

“The way that Stefan and Carl connected was that an investigation opened on Freer to see if he was dealing with stolen cars in Monte Carlo, and word got back to Stefan that Carl might possibly snitch on him. Although they didn’t know each other directly, they were both involved in the same network,” explains a source we're calling James (fearing retribution from Eriksson, our source prefers using this alias to his real name). James worked closely with Eriksson and Freer for three years in the inner circle at Gizmondo, and was privy to much of the company’s inner machinations. “So Stefan sent someone to ensure Carl would keep his mouth shut. But Carl has an absolute silver tongue, and somehow managed to not only avoid getting ‘quieted’, but he actually secured a business meeting with Stefan,” James says.

From this meeting a business partnership emerged that would end with a fiery Malibu car crash and the embezzled disappearance of hundreds of millions of investment dollars. But perhaps the most telling aspect of this origin tale is Carl Freer’s masterful skills of oratory persuasion. Somehow, in the face of imminent underworld pressure, he managed to not only avoid punishment completely, but actually twisted the situation to his benefit—inverting possible mob justice into a business opportunity. “[Freer] has a tremendous verbal capacity,” Swedish investigator Kjell Soderberg is quoted as saying in a Los Angeles Times feature. “He could sell sand in the Sahara and refrigerators to Eskimos.”

In fact, the official reasoning for Gizmondo’s parent company, Tiger Telmatics, to initially hire Eriksson was to provide the company with “strategic introductions” to high-profile car racing contacts. Which Eriksson did, to a degree, securing sponsorship to the Jordan Grand Prix team. (When Gizmondo stock eventually crashed, and they never paid their sponsorship bill to Jordan, the team sued them for nearly $3 million for breach of contract.) As an official sponsor, Jordan placed one of their race cars in the Gizmondo Europe corporate headquarters lobby, just off the Farnborough Airstrip, a mere 45 minutes outside of London. While most companies would be satisfied with an innocuous modern sculpture or impressionist painting, Gizmondo preferred to have a $6 million, canary yellow Formula One car in its glass-walled entryway, ogled by all.

In Part 2, read about how the Gizmondo founders trade on the currency of glamour. (Or skip ahead to the stunning account of what really happened that fateful morning in Malibu.)