The Yukon’s new Ultimate trim borrows a page off the Escalade’s playbook in terms of luxury and tech. 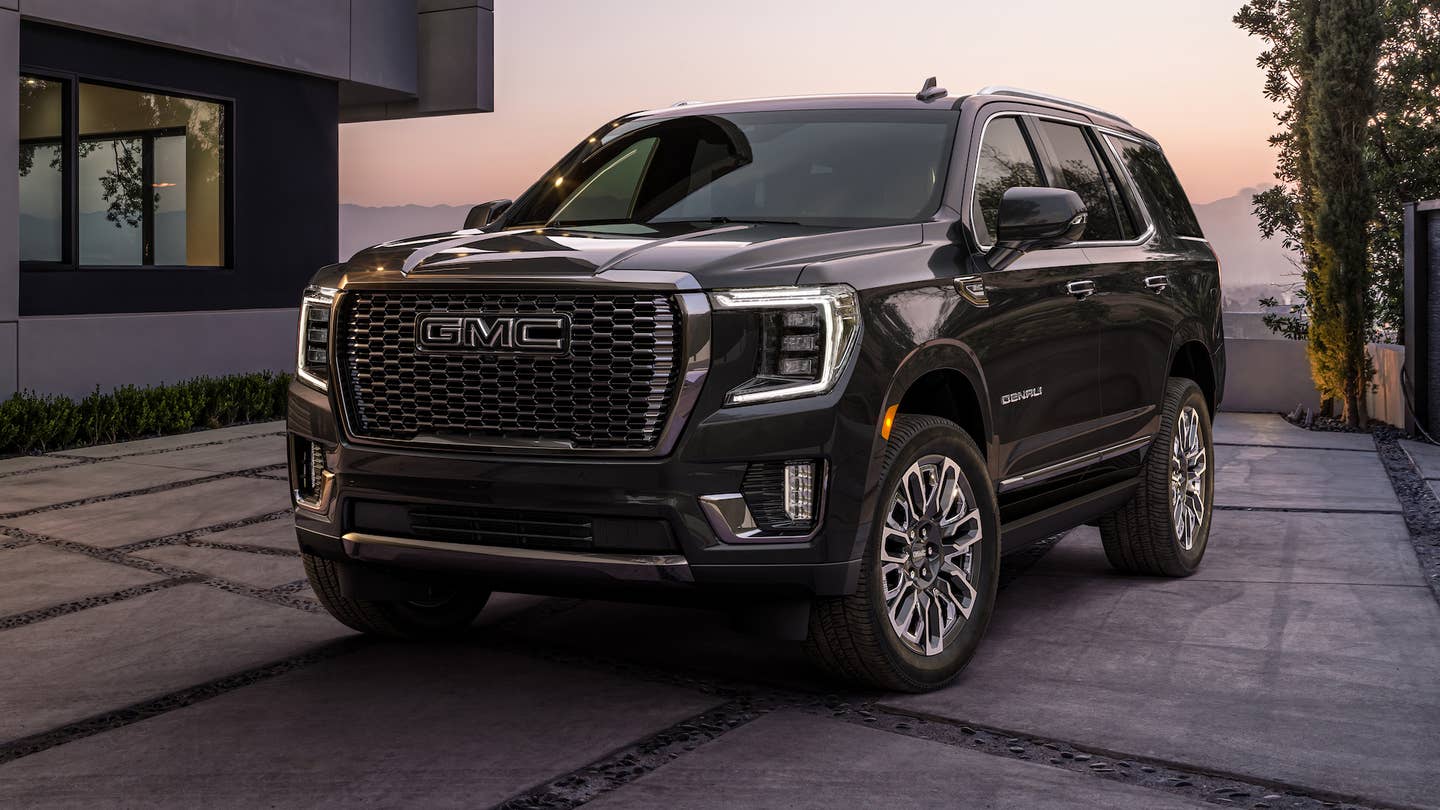 The 2023 GMC Yukon Denali is taking luxury and technology to the next level with an all-new trim: Denali Ultimate. This new variant claims to be the most opulent Yukon ever, bringing it closer to its famous GM cousin, the Cadillac Escalade.

Most of the Denali Ultimate luxuries can be found in the cabin of the Yukon, but there are a few new exterior details as well. For instance, Ultimate customers get exclusive darkened "Vader" chrome and "Galvano" silver accents, along with bright chrome door and window trim, as well as unique 22-inch, seven-spoke machined wheels with chrome accents and dark paint. Ultimate trim, ultimate chrome. See what GMC did there?

Inside, the Yukon Denali Ultimate is less chrome-rific, with a new Alpine Umber full-grain leather interior for all three rows of seats, 16-way massaging front seats, trim-exclusive plaited contrast stitching, open-pore Paldao woodgrain trim (the dash trim features a laser-etched topographical map of Mount Denali), and an 18-speaker Bose surround sound system. The latter gets stainless steel speaker grilles in both the doors and headrests. Not entirely sure about having metal speakers right next to my ears, where my head touches the seat, but I'll keep an open mind.

Powertrains remain the same as other Yukons, with either a 6.2-liter V8 or a 3.0-liter turbo diesel engine, both of which are paired to a 10-speed automatic transmission. Ultimate trim brings Magnetic Ride Control, Air Ride Adaptive Suspension, Active Response 4WD with an electronically controlled limited-slip differential, and an Auto Track two-speed transfer.

GMC's 10.2-inch infotainment system with wireless Apple CarPlay and Android Auto is standard, but if you want a WiFi hotspot or Amazon Alexa built-in, you'll have to pay a bit extra. Another optional extra is GM's excellent Super Cruise hands-free driving assistance system, which comes with a trailering setting now.

Speaking of what you'll have to pay, GMC hasn't released pricing on the Yukon Denali's Ultimate package just yet, but it could be priced similarly to the Sierra Denali's Ultimate package, which costs $20,000. That would push its starting price to over $90,000, and potentially over $100,000 with options, which would seriously infringe on the Cadillac Escalade's territory.

It will be interesting to see how many people will drop six figures on a GMC Yukon Denali Ultimate when they can buy a loaded Escalade for a similar price.

2021 GMC Yukon Denali Review: One of the Best SUVs, But Is It Really a Better Buy Than a Tahoe?

It’s a fantastic way to transport the family, but so is the considerably-cheaper Chevrolet version.