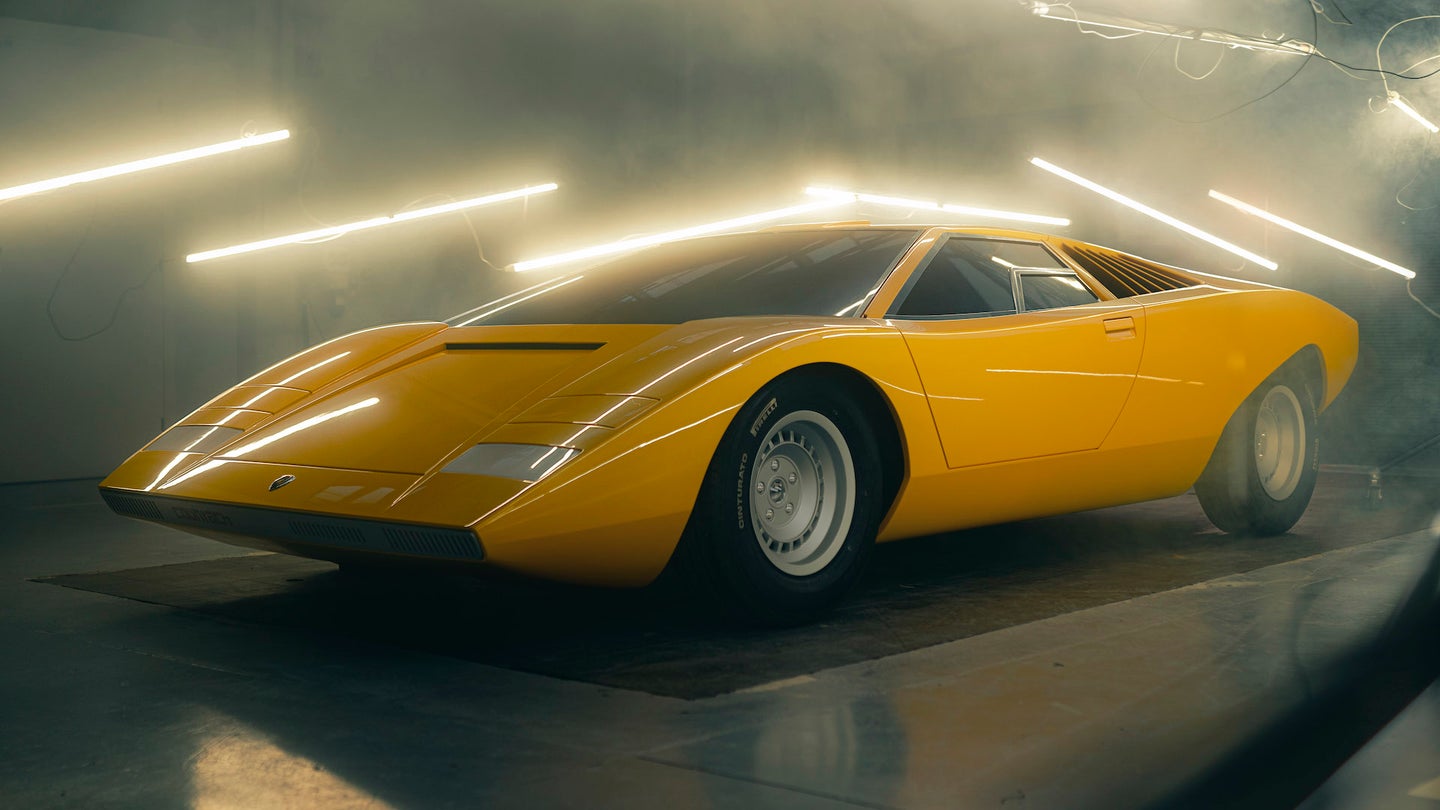 Lamborghini's initial concept for the Countach, the LP 500, didn't survive the 1970s. It was used in early 1974 for crash testing and was lost thereafter; a fate unbefitting of possibly the most iconic shape in automotive history. This also meant making another LP 500 wouldn't be an easy feat—though not an impossible one, as Lamborghini has just proven with a faithful recreation commissioned by a special customer.

The tale of the LP 500 Countach revival came about close to four years ago when said customer asked Lamborghini's historical arm, Polo Storico, if rebuilding the car was a possibility. Lamborghini then spent months scraping together materials to work out whether the project was feasible, gathering everything from concept art and internal documents to meeting reports, photographs, and even the memories of people who worked there in-period. Together, it was enough to assemble a complete dossier on the LP 500 and begin its construction.

Lamborghini started with the LP 500's "platform chassis," which was replaced for the production car by a tubular frame. It, along with the bodywork, was slightly redesigned, taking care to acknowledge the production methods available at the time. A similar process was done for the car's "Giallo Fly Speciale" paint, and of course, the interior.

"To arrive at the car that debuted in Geneva in 1971, a one-to-one scale styling model was developed, which along with the car itself was lost over time, but extensive photographic evidence of it remains. This is the same approach with which we decided to tackle the project," explained Mitja Borkert, Head of Design at Lamborghini's Centro Stile.

"Starting from publications of the time, from images on homologation sheets and other material recovered from Polo Storico, we were able to reconstruct the mathematics necessary for creating the first one-to-one scale model," Borkert said. "The biggest challenge was to create the exact volume of the car, and for this we used the opportunity to take a 3D scan of our LP 400 chassis 001, which was an enormous source of information. It took us 2,000 hours of work altogether to arrive at the final model, with lines that satisfied us. The exact same procedure was followed for the interior."

Lamborghini made the revived LP 500 as mechanically accurate as possible, utilizing a combination of original spares, rebuilt period parts, and newly manufactured components in the original style. The same went for the tires—Pirelli Cinturato CN12s—which Pirelli supplied with the same tread pattern but with a more modern compound and structure.

In all, reviving the original 1971 Countach LP 500 concept took Lamborghini more than 25,000 hours of work, all of which will be on display this weekend in Italy at Concorso d'Eleganza Villa d'Este. Whether or not it wins any awards, Lamborghini will no doubt be proud to have brought the shape that changed supercars forever back to life.

It’s so bad at being a normal car. But isn’t that the point of a Lamborghini?

Lamborghini Is Not Ready to Give Up Its V12

“The sound of the engine will remain one of the most important characteristics of our future cars,” Chief Technology Officer Maurizio Reggiani says.