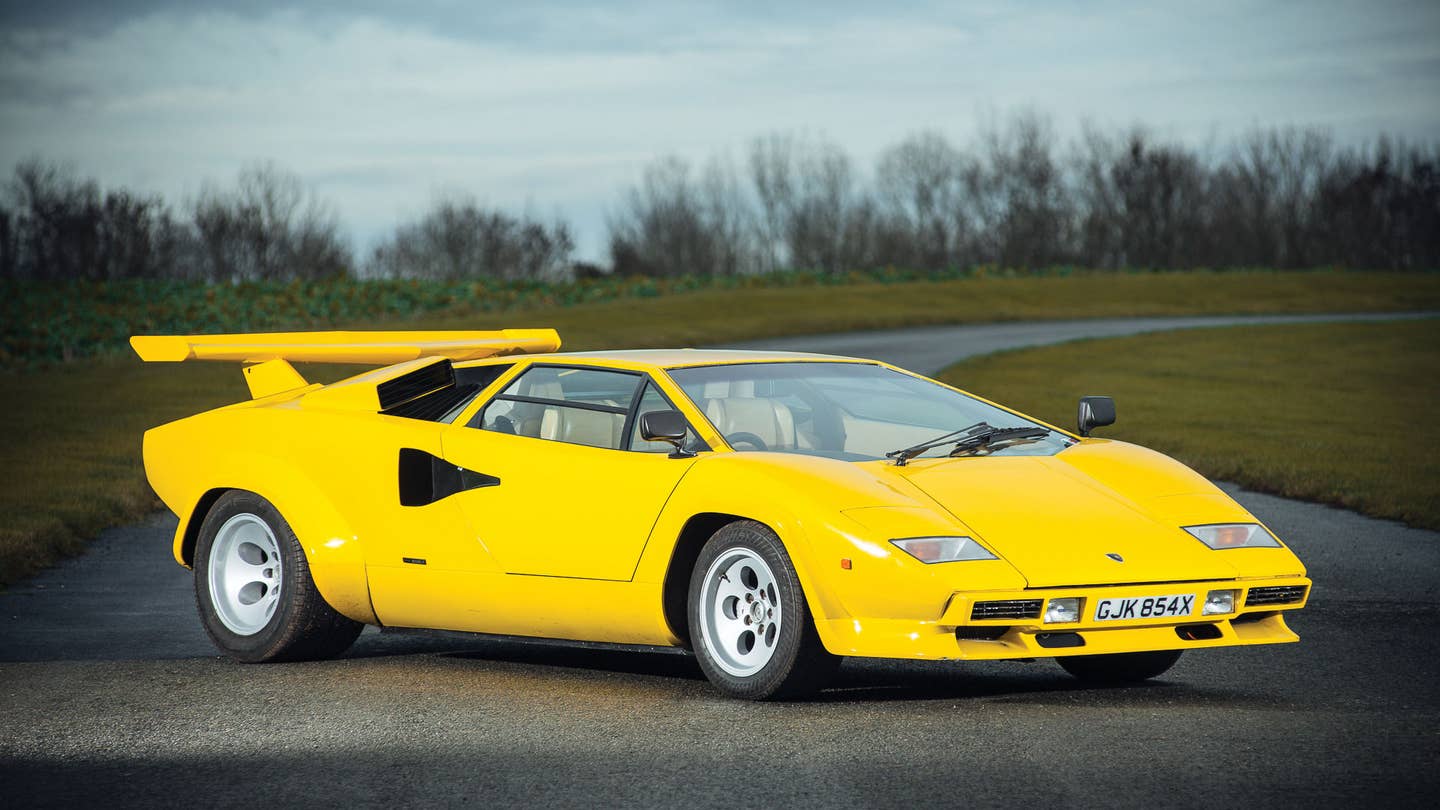 The Lamborghini Miura might be the original supercar, but the Countach defines the genre. Dubbed LP500 for its 5.0-liter V12, the first prototype debuted at the Geneva Motor Show in 1971. Time stopped, the world gawked, and orders flooded in. Road-ready examples, christened LP400 to reflect production displacement, began leaving Sant’Agata three years later. The car saved Lamborghini from financial ruin, permeated pop culture, and reinvented itself continuously: LP400S, Turbo, Quattrovalvole. More aero, fatter tires, meaner spec. By the time production ended, in 1990, the Countach commanded six-figure dealer sums, Ferrari’s respect, and a Roman cavalry's worth of horsepower at the rear wheels.

But you already know all that.

Hell, everybody does. In fact, you've probably heard what countach means in Piedmontese, and seen the director’s cut of Cannonball Run, to boot. Okay, wiseguy—you want to really nerd out? Waste a little time feasting on a pile of obscure Italian supercar factoids? Done. Here are five things you didn’t know about the Lamborghini Countach.

Countach performance is the stuff of legend. Some of it’s legit; a lot is B.S. Valentino Balboni, Lamborghini’s longtime test driver, says more than a few “official” top speeds set at the Nardo test track are bunk. Lamborghini doctored tires, removed mirrors and wipers, even hollowed out suspension joints—anything to beat Ferrari. Not exactly surprising. But, in terms of mythos, the LP5000S Quattrovalvole trumps all. Claims of the car hitting 100 mph in 10 seconds, and handily breaking 200 mph, mostly trace their origins to a landmark 1986 Fast Lane magazine road test, where editor Peter Dron rode with F1 driver Pierluigi Martini in a then-new QV. Dron witnessed the speedo “reading 325 kmh” (201.9 mph), and clocked the flying kilometer at 11.46 seconds at a heady 314.1 kmh (195.2 mph). Balboni remembers that car; the factory rigged the airbox. Intake spacers gave Martini’s QV, the gnarliest hexa-carbureted Euro-spec model, a healthy bump in top-end power, and an edge in the test.

2. Lamborghini installed the spoilers in a parking lot

That iconic rear wing was purely cosmetic. The Countach actually suffers front axle lift at high speed, and bolting a park bench out back only exacerbates the issue. But customers loved the look, so engineers zeroed out the wing’s angle, rendering it nonfunctional. Designed as a one-off for F1 impresario Walter Wolf, the spoiler wasn’t an official option, either. Once it caught on, circa 1976, Lamborghini couldn’t afford to re-homologate the car with a new aero appendage. As a workaround, completed cars were pulled off the assembly line and into the factory parking lot, where employees installed the rear wing—using an electric hand drill—while awaiting dealer transport. The job took about 10 minutes.

3. The window glass is basically unobtanium

The Countach’s exterior styling, penned by Marcello Gandini, borrows heavily from two earlier Bertone concepts: The 1967 Lamborghini Marzal and the 1968 Alfa Romeo Carabo. Both used special anti-glare safety glass sourced from a Belgian firm called VHR-Glaverbel, which had recently developed a new super-lightweight formula. Porsche soon caught on, and started integrating the glass into its Group 4 911 race cars and RS homologation specials. When the production Countach LP400 finally showed up, it followed suit, utilizing Glaverbel glass throughout. More than four decades later, those original window sets are hen’s teeth. Just sourcing a replica of the windshield will cost you around $7,000.

4. It never saw the inside of a wind tunnel

The LP400 looks like one slippery mother. In reality, not so much. During development, cash-strapped engineers Paolo Stanzani and Massimo Perenti resorted to slapdash flow visualization: They glued fabric feelers all over the car, photographed it on the freeway with a motor-driven camera, and adjusted bodywork accordingly. Meaning all the Countach’s initial aerodynamic calculations were based off crude, open-road tufting tests. This goes a long way to explaining the car’s unremarkable 0.42 drag coefficient. Lamborghini continued using guerilla aero methods until Chrysler took over, and insisted the Diablo undergo proper wind tunnel testing.

(Bonus fact: The Countach’s thermodynamics were similarly approximate. Stanzani and Perenti collected temperature readings from a Telemax gauge, then attempted to maximize airflow around hotter areas.)

5. They only built the car because the boss lost a bet

Founding CEO Ferruccio Lamborghini famously disallowed factory-backed racing. Too expensive, he said—too Ferrari. But the company’s forefathers, the guys behind the Miura—Gio Dallara, Giotto Bizzarrini, Bob Wallace—all came from motorsport backgrounds. Right after the LP500 prototype debuted at Geneva, Lamborghini’s tractor operation took a big financial hit. With the oil crisis looming, Ferruccio wasn’t sold on bringing the car to production, so he struck a deal with the engineers: Wallace would take the prototype on an epic road trip to see the Targa Florio in Sicily, then return to company headquarters at Sant’Agata. If the car could make it, Lamborghini would build it. Wallace got back in May 1972, and presented the test car, still running, to Ferruccio. Two years later, the first Countach LP400 rolled off the assembly line.