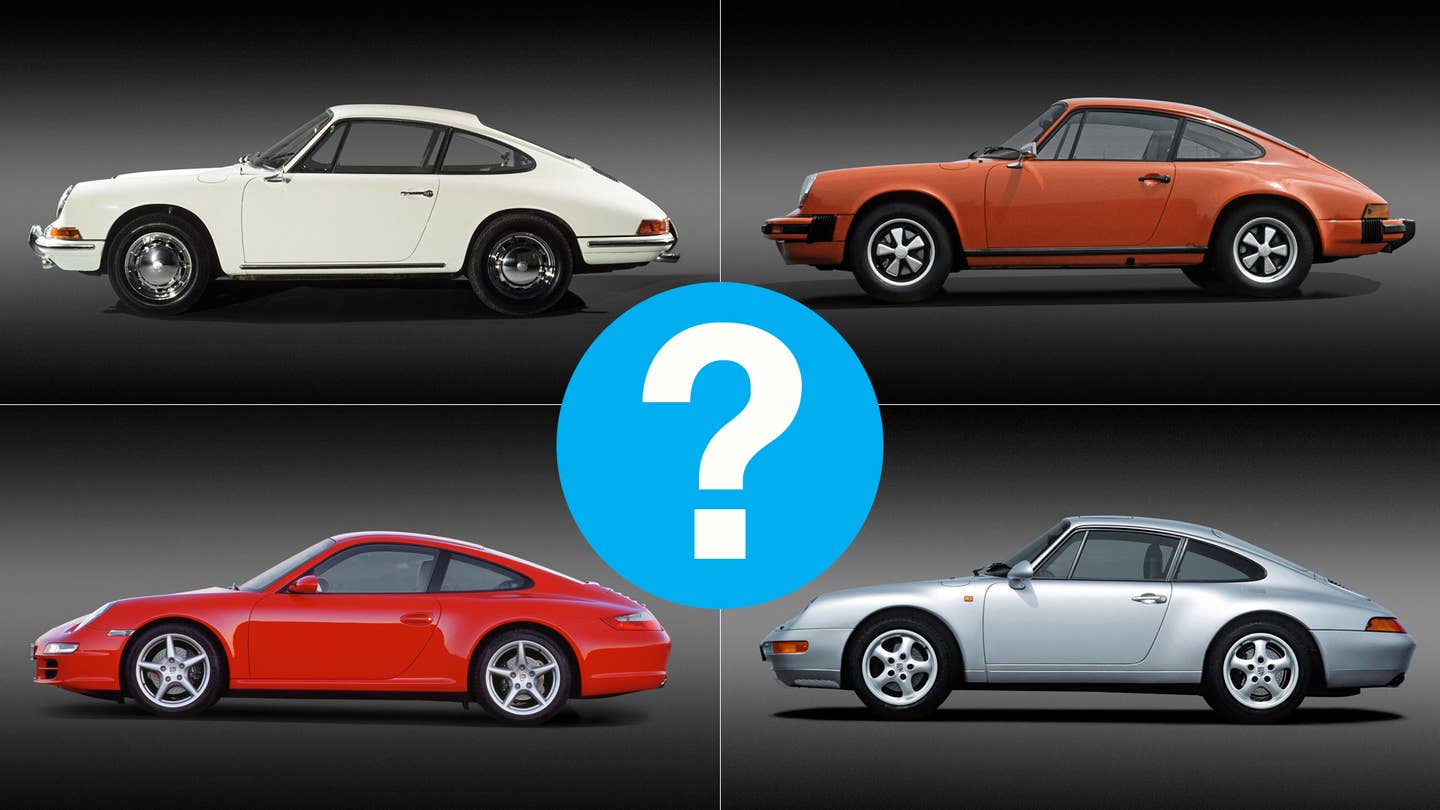 A: Only the truly obsessive—that’s Bruce Canepa, Jerry Seinfeld, and the guys who write books about the Porsche’s rear-engine stalwart—can keep all the variations straight. But there is one variant that orbits above all the others, the quintessential 911. And yes, Steve McQueen is involved.

Let’s use the process of elimination.

First, let’s eliminate all models built since the introduction of the water-cooled 996-chassis car in late 1998. The ultimate 911 needs to have an air-cooled flat-six humming in its tail, not something drowning that sound under water jackets.

The essential 911 is a car built for use by civilians on public roads. Porsche has built great competition versions (see: the Turbo RSR, 934 and 935, GT1), but those are adaptations of a car that’s identity is largely steeped in its design as road-going sports car. No, the greatest 911 must have license plates.

Let's knock out all the turbos. Yes, all the air-cooled 911 Turbos—from that first 930-chassis car of the Seventies through the 993-chassis Turbo S in 1997—are thrilling machines. But the Turbos exaggerate both the 911s virtues and its vices; everything happens faster and with less subtlety. Beyond that, the Turbo models’ flared fenders, whale tail rear spoilers and massively wide wheels add some vulgarity to the 911’s otherwise perfect shape. The Turbos are spectacular. They’re also cartoons.

No the 959, either. That Eighties wondercar is really it’s own thing—even if it shares a roof, windshield and some chassis and engine bits with the 911. The 959 remains and will always be a towering achievement. But it isn’t really a 911.

Oh, and the greatest 911 can’t be some obscure, low-volume model that’s currently being hoarded in museums and collections. The 911 is a real car, built to rack up hundreds of thousands of kilometers in daily use. The ultimate 911 earns its dignity not in profiling along South Beach or sitting at the Peterson Museum, but in taking the kids to school and making it to the Initech office park every morning. That leaves out cars like the Speedster, Carrera 3.0 and Club Sport. Also: Skip over all the half-efforts like the 911T, 911E, 911L and 911SC, too. And a pure 911 doesn’t need all-wheel drive.

The 911S was introduced as a 1969 model. It had an extended 89.3-inch wheelbase and a high-compression, fuel-injected 2-liter flat-six, rated at 190 horsepower. But it’s the 1970 model, which used new aluminum cylinder heads and other tricks to crack 200 ponies, that delivered significantly better flexibility on-track and ease during cruises. It was everything every other 911 had promised to be, but couldn’t quite pull off. The 1971 model was a rerun.

By twenty-first century standards, the 1970 911S isn’t particularly quick. Acceleration is on-par with today’s Honda Civic, but in the Vietnam Era that was quick enough. And everything a 911S did, it did on gorgeous Fuchs 15-inch wheels and puny 185-millimeter wide rubber. Those skinny tires gave the 911S a light, lively feel: Lay your fingertips lightly on the wheel, and you could feel the tires dancing across the pavement. This was a car of reflexes and instinctive control; it responded to the driver’s instincts and will with utter eagerness. It was a sublime road car and a blast on a track day. It still is.

By 1972, the 911’s engine had grown to 2.4-liters, and that sapped some personality out of the car—not a lot, but some. Then, those dopey, accordion-ended energy-absorbing bumpers came along in 1974, and 911 was never again the delicately-detailed thing it’d originally been.