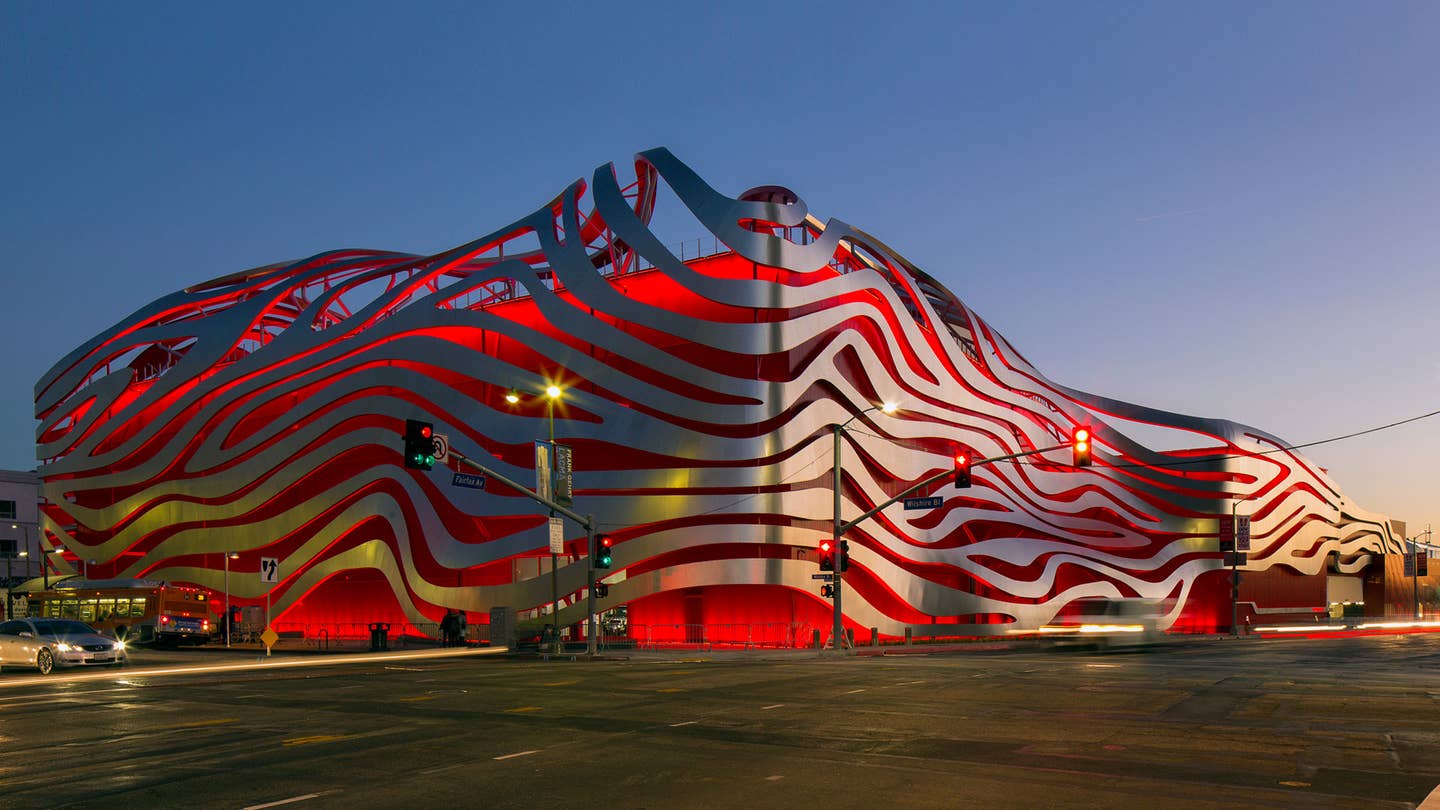 “Whoa! What is that?!?” Those four words will bark from tourists’ mouths for years to come as they pass 6060 Wilshire Boulevard in Los Angeles. There, the new Petersen Museum—easily one of the most important car museums in the world—stands in all its flowing, metallic glory. The museum first opened June 9, 1994. Today, we can finally see the results of a 13-month, $125 million rebuild.

Can’t make it to the City of Angels? Step inside with The Drive—we’ll show you around.

That wild exterior form is built from 308 “ribbon sections,” no two alike, but all gathered to make the building look like it’s about to roll down the street. The ribbons were crafted from 35 tons of textured aluminum, painted “hot rod red.” Even the 140,000 stainless steel screws that hold everything in place were crafted to resemble automobile fasteners. The metal was designed and fabricated in Kansas City and hauled to LA in 60 truckloads.

Step inside to the first floor: 27,883 square-feet of gallery space. First thing you do is fuel up with a Shelby Big Block IPA. Yes, as in Carroll Shelby-branded craft beer, in a can. You walk into the Sydorick Grand Concourse, the opening salvo of the mind-bending experience to follow. Grand, indeed. Look sharp for a 1970 McLaren Can-Am race car. (We love this thing because it was built while Bruce McLaren, founder of the legendary race team and brand, was still alive; he died in June of that year while testing one of his machines.)

Here on this first floor you’ll find the BMW Art Car exhibit in the Armand Hammer Foundation Gallery, with cars painted by the likes of David Hockney and American mid-century abstract expressionist Alexander Calder. Stroll into the Mullin Grand Salon (named for Peter Mullin, the famed car collector and chairman of the museum’s board of directors). Is that a 1953 Delahaye Type 178? Would we lie? And it’s worth more than most folks’ life-insurance policies. So is the 1938 Mercedes-Benz 540K Autobahn and the 1930 Rolls-Royce Phantom, the latter having cost $20,000 new (in Depression-era figures, the equivalent of $285,000 today). There’s a four-pack of Bugattis from the Thirties sitting here. Drink it in. Drink it all in.

The second floor unfolds in another 43,790 square-feet of gallery space, featuring “Race Cars for the Road,” a collaboration between the Petersen and Ford Motor. Right there, among much more, is an incredibly rare 1967 GT40 Mark III—a car that this writer has driven in, with Jay Leno at the wheel.

Also on this second floor: “Hot Rods and Customs” (the museum’s founder, Robert Petersen, was also the founder of Hot Rod magazine), with everything from a 1951 George Barris hot-rod Mercury to Ken Block’s 2011 Ford “Gymkhana III” monsterized Fiesta. From there, stroll to the Maserati section, or the wing devoted to Pixar cars, or the row of Xbox Forza simulators.

You end up on the third floor: another 22,573 square feet. Up here is a whole section of concept cars, and then for many tourists who’ll hit this museum, the piece de resistance—the Hollywood Gallery; this is Tinseltown, after all. Among the bevy of hot metal is Elvis Presley’s 1971 De Tomaso Pantera, which he personally shot with his own firearm during a shit-fit when the car wouldn’t start. The bullet holes are still there. Also: a 1982 Ferrari 308GTSi driven by Tom Selleck in the Magnum P.I. television series. And an official studio Michael Keaton-era Batmobile from Batman (1989) and Batman Returns (1992). Two Bond cars. A Pontiac Aztek featured in all five seasons of Breaking Bad. It’s a grab bag, but the best possible kind.

By now, you’re breathless, and amazingly frustrated that for all of this thunderous beauty, you can’t hear any of the engines, and you can’t drive any of these cars. Better go get another Shelby IPA or three. You’re gonna be here a while.