We Talked to Project 917, the Team Revamping the Porsche 917

Building a modern-day track version of the famed Porsche race car is just the beginning for this U.K.-based crew. 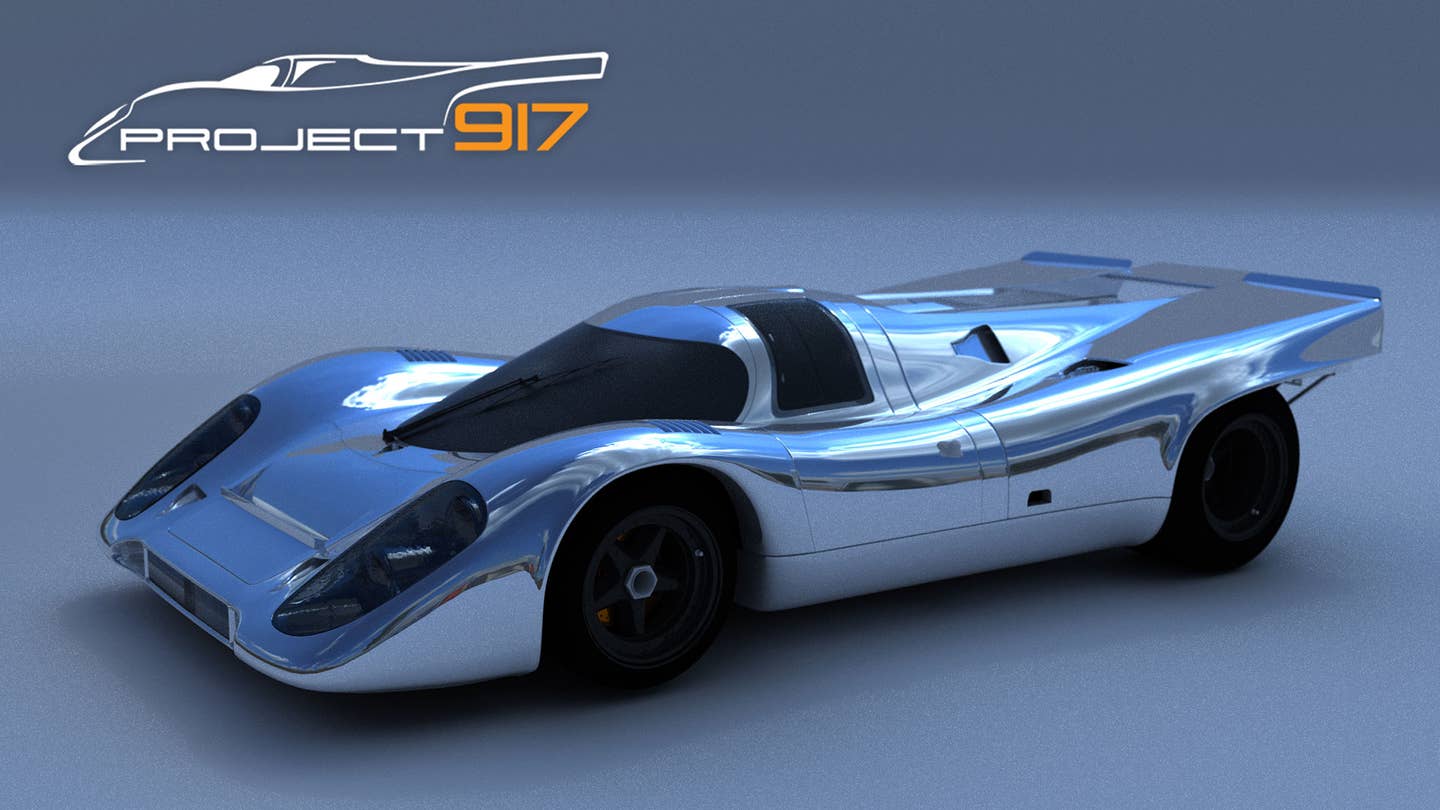 Last week, the world’s automotive nobility gathered in California to celebrate the classic car bacchanal known as the Pebble Beach Concours d'Elegance. Thousands of miles from the shores of Carmel, however, a group of British enthusiasts is hard at work on something called “Project 917”—a plan to build a car that could one day wind up on one of those Pebble greens.

The number in that project name refers to the Porsche 917, a waist-high wedge of racing car from the 1970s powered by a flat 12-cylinder engine. Two consecutive Le Mans victories, Can-Am series domination, and a starring role in Steve McQueen’s 1971 movie Le Mans all combined made the 917 famous. Project 917 picks up where McQueen left off.

“To kickstart this, we’re building a track-day version of the 917 which will look exactly like the car Steve McQueen drives in Le Mans,"  Project 917 leader Ian Howe tells The Drive. "We’ll invite fans and enthusiasts to slide into the cockpit of a 1970s race car and take it ‘round some nice circuits.”

Despite the name and obvious comparisons, Project 917 has no official connection to Porsche. The group trademarked the number “917,” and the proper name of the track car is 917R. Project members are “in consultation” with several teams that run Porsches like the 911 GT3 and Cayman GT4, though, and Howe believes the team may be able to grab some Porsche-sponsored engineering talent.​

The track car will begin with a chassis and body from South Africa’s Bailey Cars, a respected maker of recreation racers from the 1960s and 1970s. “We’ll look to enhance the engineering for our purposes,” says Howe, “and we’ll use a contemporary Porsche engine, a 3.6-liter flat-six, maybe turbocharged, we’re not entirely sure yet.” U.K. company Rally Prep, which runs Toyota’s GT86 rally program in Great Britain and understands developing one-off concepts for hard use, will handle the responsibilities of building the new car.

Howe estimates the engine will produce 285 to 300 horsepower, and will motivate a two-seater with a target weight of 917 kilos—in 'Murican, that works out to 2,022 pounds. That’s about 280 fewer horses than a Porsche 911 Turbo S, but Project 917 should have a lot less mass to push around. Assuming the weight targets hold​, the aluminum-bodied 917 should come in about 1,500 pounds less than the Turbo.

According to some vague back-of-the-napkin math, Project 917's first car should rip off a speedy run from zero to 60 miles per hour, with a top speed somewhere between 160 and 180 mph. Fast, sure, but a long way short of the 1970s racers that hauled ass beyond 220 mph.

Yet the 917R is merely the opening gambit in Project 917’s three-stage, long-term vision. The group is planning a September Indiegogo campaign to raise at least £70,000 (about $91,000 US) for the 917R build, with a completion date penciled in for mid-to-late 2017. Howe says he figures the overall track-car component of the project will cost about £100,000 (about $130,440), with the potential £30,000 difference to come from continued crowdfunding and the sale of premiere memberships in what he describes as a "917 Drive Club"—memberships which will form the vital component of stage two.

“It’ll cost £10,000 for a three-year membership,” Howe said. “The car won’t be ready the first year, but within that period our members will be invited to special 917 and Le Mans-related events and evenings with some of the drivers of the past. We’re building up a social club for these members as well.”

Once the 917R is ready, the group plans to run events in the U.K. and Europe for members and fans. Professional driving instruction will also be included in the 917 Drive Club price.

Much as the 917R is bait to entice moneyed mavens into memberships, the memberships are lures to entice deep-pocketed individuals to fund Project 917’s third stage, which is expected to commence 12 to 18 months from now.

“Our ultimate goal is to reimagine the 917 and build a highly representative, quality version of that car,” Howe said. “It will be road-legal and comply with modern safety criteria, and have a contemporary interior.”

Turning a 917 into a streetable supercar means plenty of re-engineering. The race car, for instance, places the driver’s feet ahead of the front wheels. English racing driver David Piper demonstrated the hazards of that layout while driving a 917 for McQueen’s movie; during filming, Piper suffered a horrific crash just after White House corner on the Le Mans circuit, losing his right leg from the knee down as a result.

“There’s a lot of things that we need to change,” Howe admits. “One of the first things is the fuel tanks, because on the original car they were down the side of the chassis—we would have to put the fuel cell behind the bulkhead, for instance."

"The main emphasis will be on a car that looks for all intents and purposes like a modern version of the 917 but is usable and comfortable to drive, but it will also have a performance level to match, with modern engineering and modern technologies,” he says.

The civilian version of the supercar will also pick up more evolutionary looks and a much more powerful engine, a combination that Howe hopes “people who aspire to Paganis or Aston Martins or Ferraris will take a look at and say, ‘That’s a cool looking car.’”

The production plans are exceedingly modest. Project 917 plans on building four supercars per year, unless demand requires more. “We believe there’s an opportunity to build [a] very low volume of this car, possibly to order, but using the artisan skills we have in the U.K. married to a really exciting performance chassis,” Howe says.

Depending on how much interest us raised by the 917R track car, additional money could come from affluent 917 Drive Club members, more crowdfunding, or an equity offering conducted in London. Howe’s background is in London finance, but he left The City eight years ago to work on automotive projects including a stillborn revival of historic English racing brand Coventry Climax.

If Project 917 manages to advance that far, Howe would like his new supercar revival to come to the U.S. “We want this to resonate in the States," he says. "It would be wonderful to get people to use the car at the Thermal Club and Laguna Seca.”

Prepare to hear a lot more about Project 917 as it ramps up its online presence in the future, one that takes pages from the social-media-inclusion and educational templates of upstarts like the Bloodhound SSC land-speed record team and America’s own Local Motors. The project wants to attract the know-how of anyone interested in the build, from university-trained engineers to garage tinkerers. “We’re looking to find the next Horacio Pagani, the next Gordon Murray, or the next Henry Ford if you like, the entrepreneurs of the automotive industry," Howe said. "They can come from any background.”

In fact, Howe envisions this effort as a launch pad not only for his dream car, but perhaps those of the designers and mechanics who work on it. “That would be the deuce for us," Howe says, "to see some really cool talented people go on and set up their own business and become successful.”

So who knows. If Howe can pull this off, future editions of the Pebble Concours might not only welcome his 917-inspired creation, they could include supercars inspired by Project 917 itself.