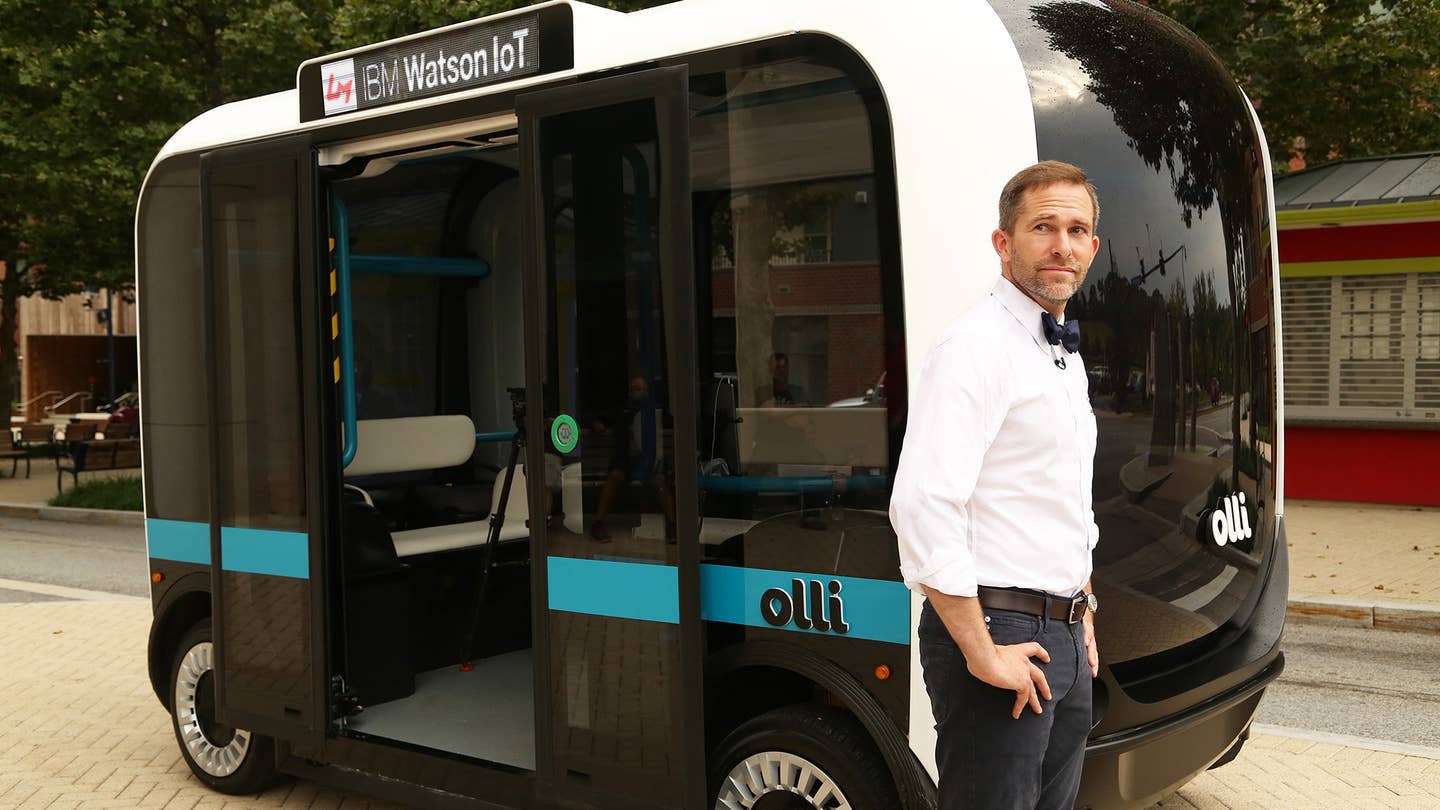 In a perfect storm of futuristic transportation innovation, Local Motors and IBM have joined forces to develop a 3-D-printed, self-driving bus that leverages IBM's Watson to help guide passengers where they want to go through natural, casual language.

The project, dubbed "Olli," may look more like a Japanese-market toaster than a conventional bus, but the electrically-powered vehicle is designed to shuttle around up to 12 people at once within its 3-D printed, Local Motors-made frame. Users will be matched up with an Olli by requesting it through an app or kiosk, where they can decide whether to hop onto one of the buses running an existing route or to charter one for their own personal use.

The actual business of driving is not performed by Watson, even though IBM's commercials make it seem like the computer is clever enough to be taking prep courses for the Turing Test. (Piloting duties will be left to a system developed by autonomous vehicle development firm Phoenix Wings.) Instead, Watson will handle the task of interacting with the organic beings inside Olli's printed frame. Utilizing several of Watson's suite of abilities—text to speech, natural language classification, etc.—along with the network of more than 30 sensors embedded throughout the vehicle, the bus will be able to talk with its occupants in a conversational manner. Passengers will be able to learn about Olli's route, learn about the bus's capabilities, ask about points of interest or for recommendations about things to do. It's like Siri for self-driving cars...if Siri worked worth a damn.

"Olli offers a smart, safe and sustainable transportation solution that is long overdue,” Local Motors CEO John B. Rogers, Jr. said at the vehicle's unveiling, according to an IBM press release. "We are now ready to accelerate the adoption of this technology and apply it to nearly every vehicle in our current portfolio and those in the very near future. I’m thrilled to see what our open community will do with the latest in advanced vehicle technology.”

Much like Bill Murray and John Belushi circa 1975, Olli is not ready for prime time. The self-driving bus will be relegated to limited operation on the roads of Washington, D.C.-area for the summer, with plans for it to demonstrate its value in the warm-weather urban areas of Miami-Dade County and Las Vegas later this year. But with Miami reportedly already interested in purchasing several of them for official use, we might be seeing a lot more of these self-driving, highly-conversational mini-buses in the near future.

That said, is it just us...or does giving a supercomputer smart enough to win Jeopardy! access to motor vehicles and additive manufacturing seem like a terrible, terrible idea?