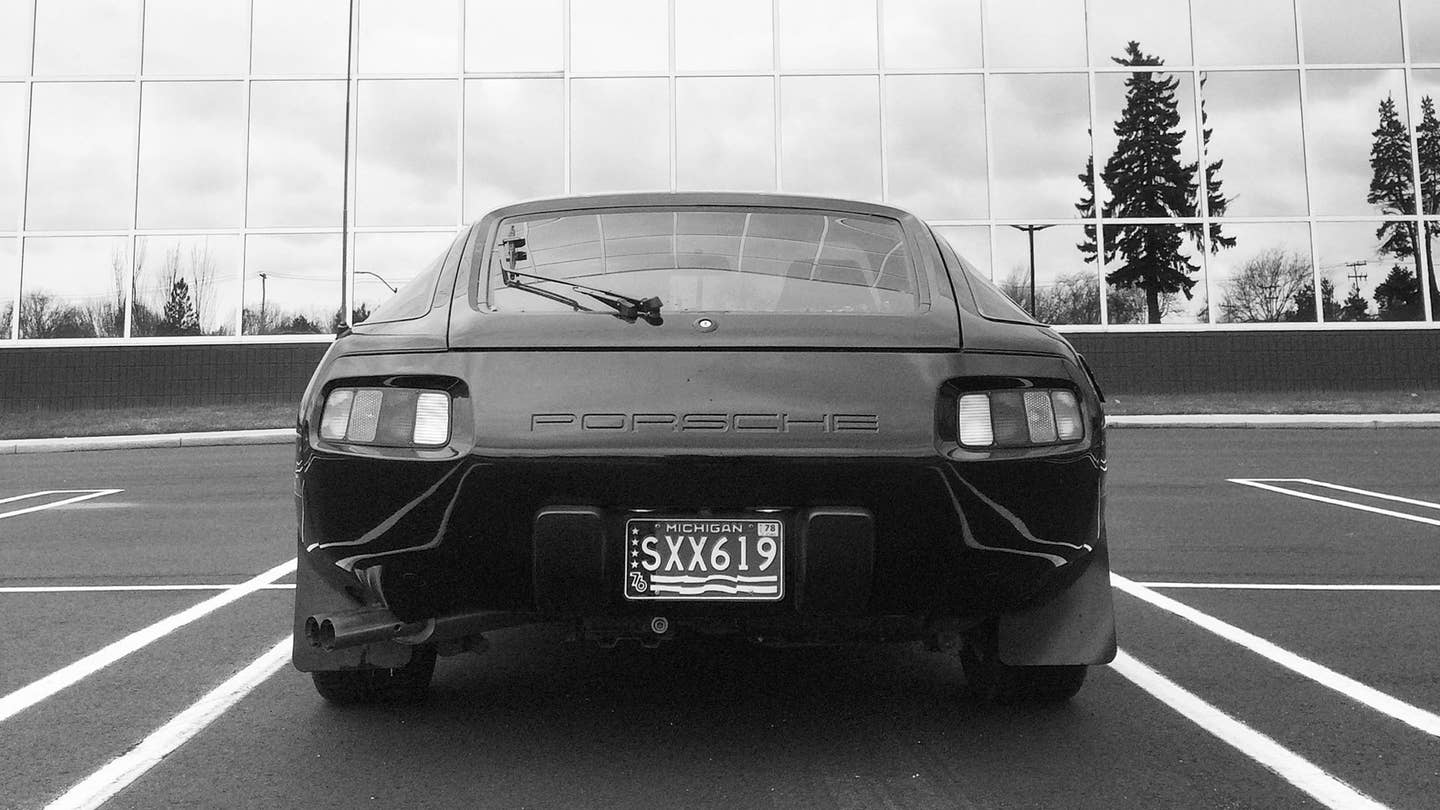 When it was unveiled in 1977 as Porsche’s new flagship, the 928 was immediately deemed sacrilege by the Stuttgart faithful. Beholden to the “timeless” design and engineering of the 911—which traced its bug-eyed/air-cooled/rear-engined roots directly to Ferdinand Porsche’s mission to build a wagen for Hitler’svolks in the 1930s—Porschephiles dug in their heels and said, nein. A heavy, luxuriously-appointed 2+2 grand tourer with a liquid-cooled V8 engine in the nose and styling that could only be described as broadly ovoid was an apostate, not the replacement for the flailing, emissions-challenged 911 that contemporary Porsche executives hoped it would become.

Rejection by brand loyalists was just one of the many reason that the 928 floundered in the American marketplace. It was difficult to codify; not exactly a sports car, but also without the cushy, boulevardier image of the BMW 6-Series or Jaguar XJS. Because of currency fluctuations, it was expensive—more than twice as costly as a Corvette. And, thanks to its similar size and drivetrain, it was compared with the Corvette in other ways, an unfair juxtaposition given its combination of technical sophistication and luxury, two descriptors that could never be applied to the rattletrap plastic-wrap late-Seventies C3.

Stout German build quality, an abundance of unrustable aluminum body panels, and surprisingly robust components have lead to a relatively high survival rate for the 25,000 928s sold in North America during the model’s nearly two-decade run. However, a plethora of electrical gremlins, interior materials that decompose under the terrarium-like windshield glass, and the high cost of major fixes have sent many of these vehicles to languish in a state unbecoming what was once a daily-driving exotic.

Fortunately for lovers of the underappreciated 928 (full disclosure: I am one of those people), that's changing. As the marque’s tide rises on a sea of overvalued 911s, the boats further downstream are finally starting to see some buoyancy. Prices on some 944s and 924s are beginning to increase. But according to the vintage vehicle valuation experts at Hagerty, the price for an average (Condition 3) 928 has gone up by a whopping 63 percent over the past five years, even as the collectible car market as a whole has cooled off.

Admittedly, there was almost nowhere to go but up, as these vehicles reached the nadir of their economic lifecycle earlier this decade, trading for about what the rotting shell of a borderline undesirable 911 is priced at now. But with low point of entry and a decent opportunity for upside, you can still get in on something resembling the ground level.

Down on power and amenities, but up on simplicity of engineering, the earliest cars from the first years in the American market may be the ideal point of entry. Currently trading for a Condition 3 average of around $15,000, these 240-hp 1978-79 “Sharks” have the added bonus of adhering most closely to the original design, lacking the air dams, side strakes, rear spoilers and other interruptions visited on later cars. (If you nab one with a manual transmission, they also come with a cool dogleg five-speed.) Like the early unspoiled Lamborghini Countaches, they’ve seen some of the steepest upticks in value within the model range, nearly doubling in value (up 99 percent) over the past five years.

You’re probably already priced out of the last-of-the-run 1993-1995 GTS cars, with their 350-hp V8s. Pristine Condition 1 models are routinely selling for over six figures now, and even average cars are over $50,000, up over 50 percent over five years ago. But you’re not too late to nab a late '80s/early '90s S4, with a heavy-breathing 32-valve V8 and 320 hp. You can get into an average one of those for around $25,000, up around 75 percent in the past five years. You’ll have to put up with flush mounted tail lamps, an integrated air dam up front that added some length, and some more fritzy electronic doo-daddery inside—but the extra power and sophistication is probably worth it, if you like your modern classic with a touch of modernity.

If you want to go super cheap, the undesirable 1980-82 U.S. cars are still available for under $10,000, though they feature the worst-of-both-worlds combination of the bungled cosmetic add-ons of the later 928Ss without their more sophisticated powertrain and suspension components.

Walsh recommends that your best bet for finding a good 928 is to “get friendly with your local Porsche club, or 928 club if there’s a separate one. The very best cars in any given geographical area are usually either owned by club members, or club members know about them.”

Clean design has a way of aging well, so regardless of which era of 928 you decide to buy, you can rest assured that it will continue to look at once intensely modern, and like something out of time. (People have often stopped to ask me if my car is “the new Porsche.”) And any 928 you choose is going to provide a similarly grounded driving experience. Though egg-shaped on the outside, the car feels nearly square from the cockpit, broad shouldered and thick thighed. The ride it delivers is extremely planted, especially at speed. But like any German GT, it’s arrogant, and loves to show off its ability to slide and dominate.

“I would describe them as burly, grouchy, pugnacious,” Walsh says. “A 928 is looking to pick a fight. If you were at a bar, and a 928 sat down next to you, it would be time to chug your beer and ask for the tab.”