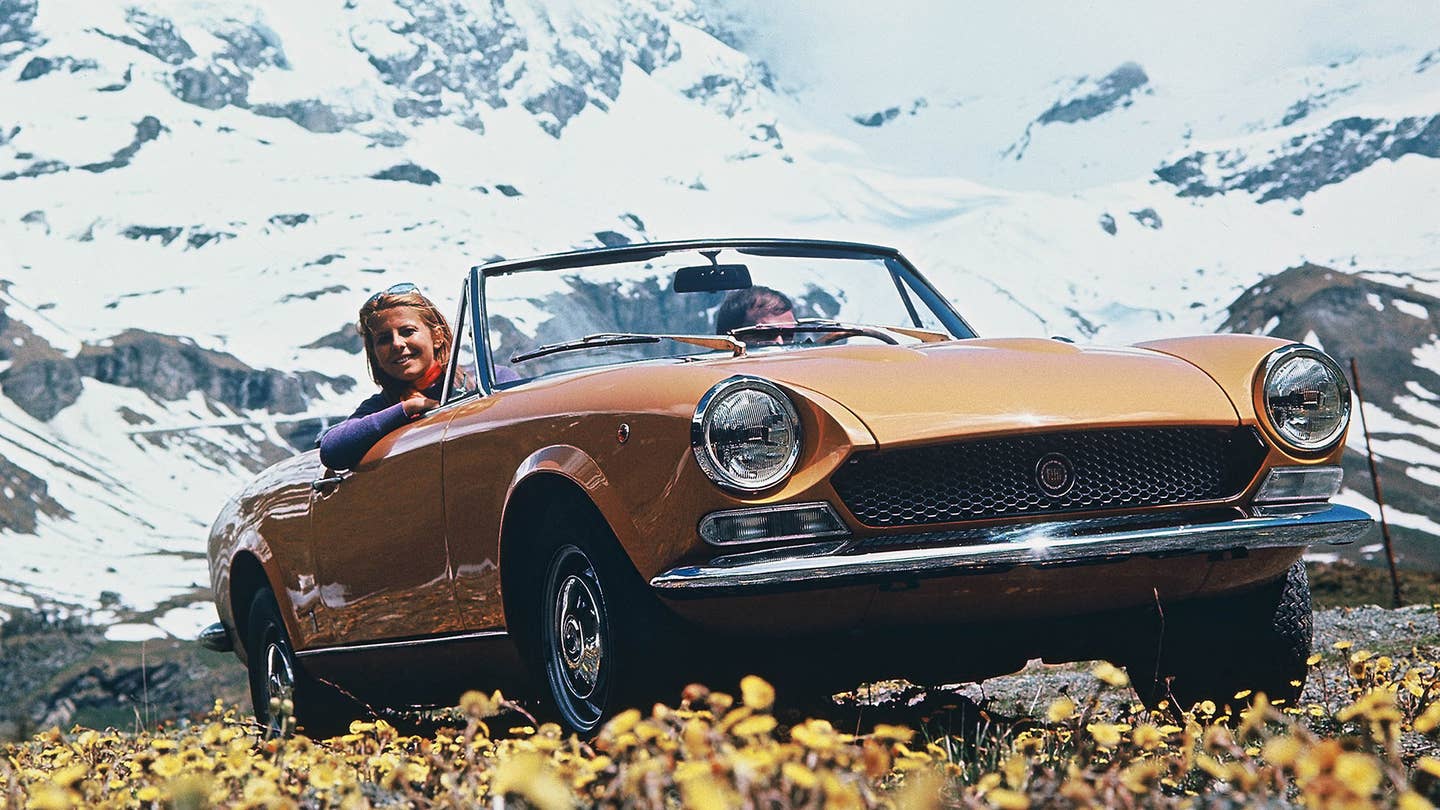 The 2017 Fiat 124 Spider may be getting all the media love right now, but those looking for a return on investment should think a little . . . older. Consider that if I suggested your next automotive purchase should be a vintage Space Age Italian convertible with an elegant, Pininfarina-penned body, an all-independent race-inspired suspension, and a luxurious if straightforward wood and leather interior, plus an Aurelio Lampredi-designed dual-overhead-cam engine, a five-speed manual transmission, four-wheel disc brakes, and lightweight Cromodora alloy wheels, you would probably think I was describing a six- or seven-figure Ferrari. Not to mention a lifetime of five-figure repair bills.

If I were to tell you that all of this—plus splendid ergonomics and affordable service—was available for the mid four-figure price of a Prada suitcase, you would likely think I’d spent too much time being hot-boxed in a Piaggio Ape. Well, that may also be the case, but that doesn’t negate the existence of the 1968-1985 Fiat 124. Did I mention that these cars also come with a roomy trunk and back seat, and a retractable top that is among the easiest to operate of any roadster, ever (click, click, boom)?

The Spider was built with the American market in mind, and indeed that's where more than 75 percent of the nearly 200,000 produced were sold during its nearly twenty-year run. The Fiat’s popularity was based in its affordable price, its myriad standard features, and its competitive set, which consisted mainly of archaic and wheezy rag-top shitboxes like the Triumph Spitfire and MG Midget.

“The Fiat 124 Spider stands out among classic sports cars because, when it was introduced in 1966, it was technologically head and shoulders above the competition,” says Csaba Vandor, co-owner of AutoRicambi, one of the world's foremost authorities on (and parts sources for) the Spider. “While the British cars of the period were ten years behind in technology, the 124 was ten years ahead. To have a car with the kind of features that were standard on a Spider, one would have had to purchase an Alfa Romeo or a Jaguar, at substantially higher cost. The Fiat 124 Spider was a lot of car for not much money.”

Of course, this selfsame accessibility and sportiness—along with a profound lack of rust protection—has caused that enormous population to dwindle. At a recent press drive of the new 124 Spider, Fiat executives noted that less than 8,000 Spiders are still registered for the road. [Full disclosure: I’m the proud owner of a nicely restored and upgraded 1979 124.]

We previously included the 124 in a roundup of affordable collectibles. In that compendium, it shared company with nine other classic vehicles priced under $12,000—a list that included a Lotus, a Porsche, and a Maserati. This may have been an ambitious top-end figure for the Fiat. My friends at Hagerty, experts in vintage vehicle valuation, showed me on an Excel spreadsheet that one would have a very hard time spending $12,000 on a Fiat Spider.

An average, or “Condition 3” Spider is still valued at just under $10,000, and even the one or two perfect Condition 1 show-queen roadsters in existence have topped out at just over $20K. Great values are still available in the $6,000 to $8,500 range. And while much of the non blue-chip collector car market is flat-lining, or even declining, prices on Spiders are up nearly 15 percent this year alone, and seem likely to continue to increase

“Recently, with the release of the new 124, the 124 Spider has had a lot more exposure in magazines, which is also helping its image,” Vandor says. “People who are just discovering Spiders and realizing what a great bargain they are for a great looking, fun sports car,” he says. “And prices are just starting to reflect this.”

Though Fiat produced 700 or so turbocharged models for the US market late in the car’s run (1980-1981), you probably want to avoid these, as the turbo system was erratic and unreliable, and many were removed. The very early 1966-69 European market-only cars should also be avoided, as they had issues with a driveshaft-equipped torque tube, as well as a bunch of exclusive interior fitments for which parts are not readily available.

Beyond that, it’s just a question of finding the car that best suits your budget and needs. (“The bargain, of course, is the car that someone has sunk a lot of money into, as that can rarely be recuperated from a sale,” Vandor says.) No Fiat 124 is particularly fast, but every one is rev-happy, and amazingly balanced. Early cars have a tiny carbureted engine and tiny, chrome sliver bumpers to match; late cars have larger displacement and fuel injection, but often include heavy add-ons like air conditioning and power windows, as well as hundred-pound steel tube crash-impact absorbers. Because the design was virtually unchanged over the car’s life, low-spec bits from some emissions-choked, Malaise era mid-70s model can easily be swapped with a heartier and better sounding version. Fiat’s budget heritage, and a deep well of service and parts support (including Vandor’s shop) make repair and upgrades far more affordable than on Alfa Romeos or Lancias.

“This engine is super-strong, tunable and built for revs,” Vandor says. “These cars bring happiness and enjoyment to their owners. Unless they are misbehaving, in which they become . . . capricious.”