You Must Buy a 1963-68 Maserati Quattroporte

Timeless Italian style for less than a loaded Camry. 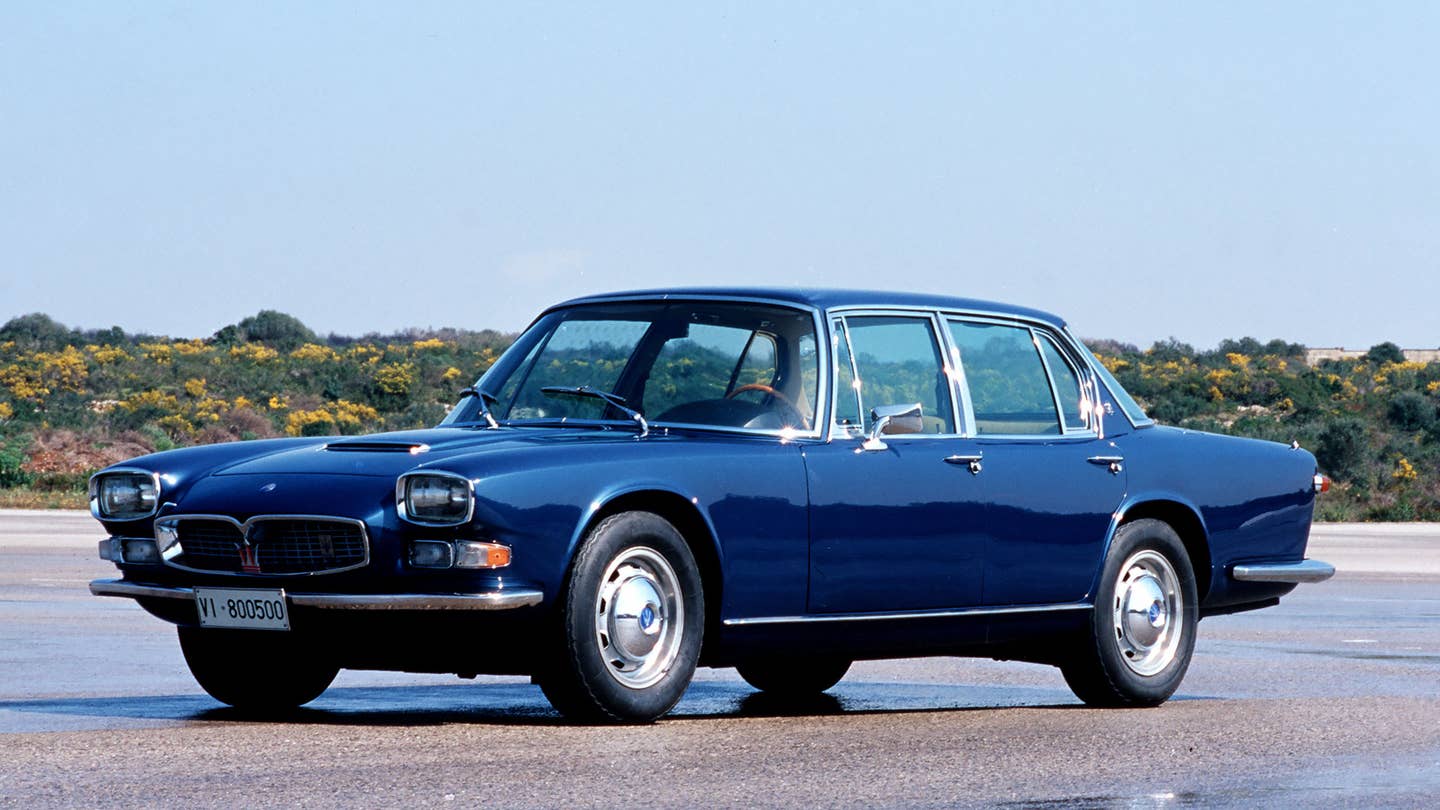 When the Maserati Quattroporte was first unveiled at the Turin Motor Show in 1963, it was something of an outlier for a brand known for nimble race cars and sybaritic GTs.

When released it was the fastest four-door vehicle in the world. Its only real competitors were extremely limited-edition vehicles like the re-born Lagonda Rapide, and the suicide-doored version of our beloved Facel Vega, the Excellence.

“Adolfo Orsi [then-owner of Maserati] always had a 360-degree overall view, and starting from the late Fifties, he had already conceived a real sedan which aimed to be the fastest berlina in the world,” says Fabio Collina, director of Maserati’s Classiche heritage department. “The decision to assemble an eight-cylinder race engine in four-door saloon totally surprised all the competitors.”

Designed by genius of elegance Pietro Frua—credited, perhaps too generously, with influencing the look of the first Vespa as well as the Saintly Volvo P1800—it looks to us like a 1963 Chrysler New Yorker that was sent to boarding school in France and placed on a halibut and kale diet. With the robust, sophisticated V8 from the trident brand’s 450S race car (yeah, that car driven by Juan Manuel Fangio and Sir Stirling Moss) stuffed under-hood, it more than met owner Orsi’s standards.

Sporting a 4.2-liter V8 fed by a quartet of Weber carburetors and backed by a five-speed manual or three-speed automatic transmission, the QP Series I put out 256 horsepower, good for an autostrada-annihilating top speed of over 140 mph. Starting in 1966, an even more potent 4.7-liter motor was available in the QP Series II—which also featured an updated rear suspension—producing 280 hp, good for a top speed of nearly 160 mph.

“You might not know, but these are very durable, well-built motors,” says Michael Kraljevic of Vantage Motors, a Connecticut shop specializing in vintage Maserati restoration. “And the sound! It’s more like V8 muscle-car growl, almost brutish.”

Speed, snarl and sheet metal are only part of the delight in these gracious sedans. We’re equally smitten with the luxe interiors, laden as they are with leather, wood, metal and delightfully confounding Italian switchgear placement. (Behold, those rows of unmarked toggles!) By comparison, a contemporary Mercedes interior looks as Spartan and plasticky as a Togi toy. And the slender pillars and broad expanses of glass provide visibility rivaled only by those bubble space helmets the Jetsons wore.

With just over 700 examples produced during its run, one would think that these gorgeous cars would be lighting up the collectible marketplace. But, as we’ve demonstrated previously, four-doors Italian cars are phenomenally undervalued. Every sports-oriented collector seemingly wants a prancing two door, along with the childless bachelor/-ette fantasy of unencumbered driving it conveys—to them and to the world.

Not us. We’re sedan proud. And the market seems to agree with our assessment, at least directionally. According to the oracles of vintage-vehicle valuation at Hagerty, the prices of first-gen QPs have nearly doubled in the past five years.

Primo “Condition 1” cars that were just $28.000 in 2010 are now selling for $53,000. Lest you think you’ve been priced out, average Condition 3 cars have escalated only from $13,000 to $25,000.  (If that’s still too rich, maybe ponder the beveled-brick Brutalist third-gen QP, which is starting to look really good to us.) The trouble is not in coming up with the cash to buy one, but in finding one for sale in the first place. Our recent searches on all of the classifieds turned up exactly one, and it’s priced high for what it is.

A Q-Ship was a category of British war boat stripped down for speed and equipped with hidden armaments for surprisingly dominant power. The Quattroporte has the same personality profile. “I think that we can call this model Dr. Jekyll and Mr. Hyde based on its double personality,” Collina says. “It’s a luxury sedan with a delicate balance between elegance and comfort, but with a racing pedigree that pushes plenty of horsepower.”

Kraljevic concurs. “If my dad was a mafioso from Sicily, or if I became the mayor of Palermo, this would be the perfect car.”