If you ration your power usage, Ford says it can stretch that to 10 days. 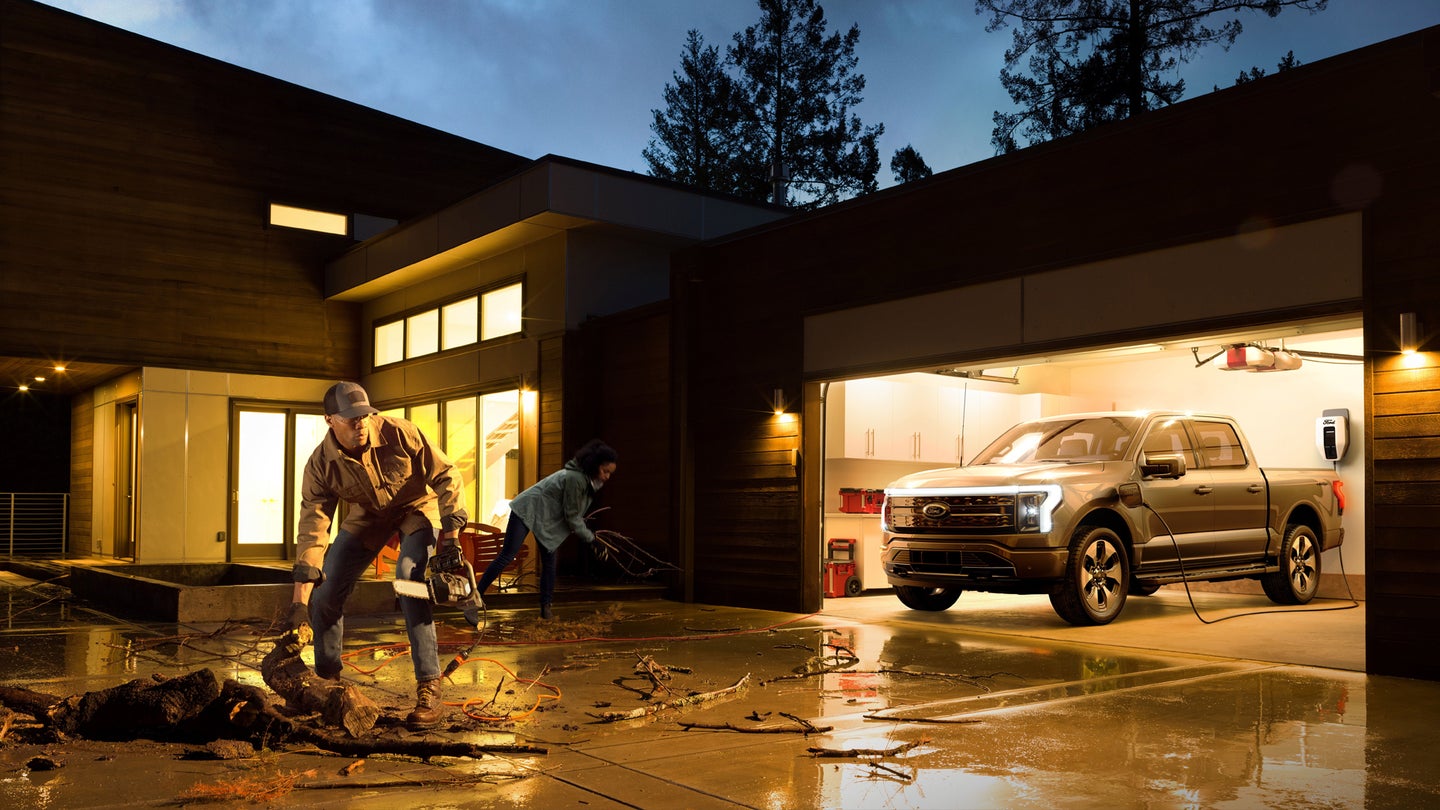 Ford's all-new electric F-150 is here, and it shows that Detroit is not messing around when it comes to the rapid shift towards electrification. Its best-selling pickup has now received the plug-in treatment, offering buyers the option to ditch gasoline and spring for a battery, complete with an available 563 horsepower on tap.

But it's not just about speed. Ford is also integrating a boatload of useful tech into this truck. From providing backup power to energize your home when the lights go out, to a portable battery to run your tools at the worksite, there's utility to show that electrification is about more than just being environmentally friendly.

The F-150 Lightning will enable a feature called Ford Intelligent Backup Power. As the name might suggest, this enables the pickup truck to act as a reserve of energy storage for homes during their most crucial times, essentially giving owners a Tesla PowerWall on wheels. If a weather event knocks out power, or if a car happens to hit a nearby electrical pole, the F-150 will seamlessly transfer its stored energy back into the home and automatically notify the owner via a push notification sent to their phone.

Assuming an average daily household electricity usage of 30 kilowatt-hours, the F-150 Lightning equipped with an extended range battery should be able to power an entire home for three days. With rationed power usage, Ford estimates that the battery can stretch for up to 10 days of use.

The Blue Oval says it will eventually roll out Ford Intelligent Power as well. This similarly named feature will allow the vehicle to power homes during peak hours, helping homeowners save money by not pulling power from the grid when energy costs are higher. When peak decreases, the F-150 will begin its charge cycle so that it has a full battery for its next expedition.

Owners will want to make use of the Ford Charge Station Pro—the automaker's top-tier Level 2 charging station. The 80-amp charger offers nearly 40 percent more amperage versus the Connected Charge Station, and 60 percent more versus the mobile charger. This provides a full charge of the extended range battery from 15 to 100 percent in just eight hours. It also enables owners to transfer 9.6 kilowatts back into the home to power anything plugged into an electrical outlet. Just don't forget to keep the truck itself plugged in.

If you're more of a get-up-and-go kind of person, you'll be happy to know that Ford also made the F-150 Lightning a power bank for the road. The automaker equipped the truck with Pro Power Onboard, the same feature which helped to power homes during the recent winter storm in Texas. Oh, it was also the inspiration behind The Drive's pretend mobile restaurant.

Apparently, Ford must have caught wind of our business idea and decided that it really was the prefect use for Pro Power Onboard, because it graciously mentioned that its can utilize up to 9.6 kW of power—which is up from the 7.2 kW available on the gasoline-powered models—to power a mobile food trailer. You can also frame a house and have an extreme tailgate party.

Both the Lariat and Platinum trims will have the full power Pro Power Onboard system as standard. That means 10 total 120-volt outlets available for use; two in the cab, four in the bed, and four in the Mega Power Frunk (yes, it's really called that). The XLT trim will have a 2.4-kW system standard; however, Ford will offer an optional upgrade to the 9.6-kW package.

The Ford F-150 Lightning starts at $39,974 for its commercially oriented base trim. The XLT will cost buyers $52,974, and the price continues up the ladder all the way to $90,000 for top-spec models. The pickup can be reserved today with a refundable $100 deposit and is expected to release in spring 2022.