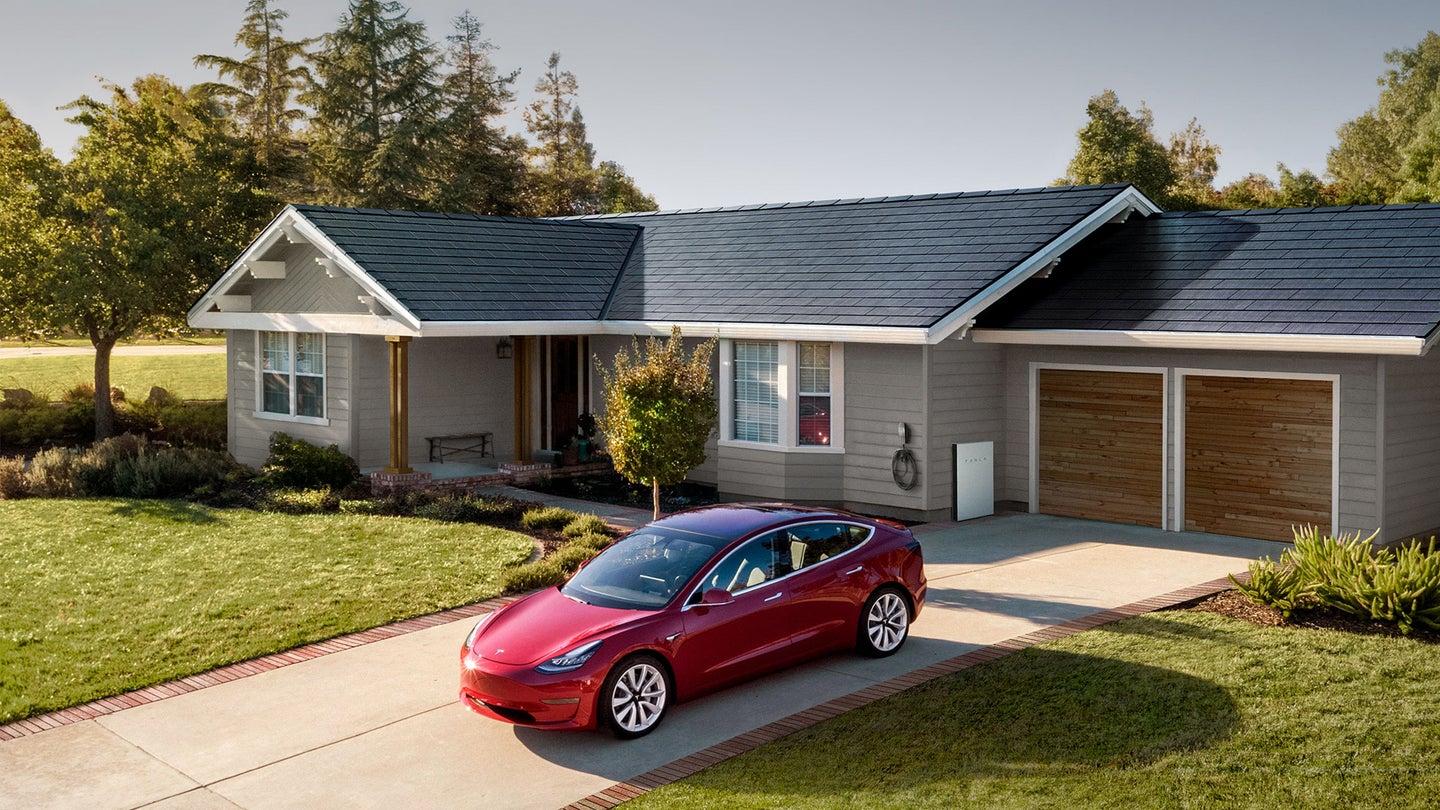 Welcome back to another edition of Speed Lines, The Drive's daily roundup of automotive and tech news. Today we're talking about solar panels, coronavirus and hitchhiking apps in France. It's going to be an action-packed thrill ride, let me tell you that right now.

Can Solar Roofs Get Huge For Tesla?

When it comes to Elon Musk, it feels like everything is the Next Big Thing—the Cybertruck, the Model Y crossover, the new Gigafactories, over-the-air car updates, Autopilot and so on. One area of the company that's comparatively flown under the radar so far is the Solar Roof: solar panels and Powerwall home batteries to charge the electric cars using energy from the mighty sun.

Bloomberg checks in with the status of the program by talking to a couple (they own a Model 3 and a Model X) that financed a Solar Roof and Powerwall setup to the tune of $83,000. Not at all cheap, even though they needed to replace their roof anyway and the reduced electric bill and federal tax credits offset some of that.

It's not quite where it needs to be on several levels. Musk said he wants to target an installation time of eight hours, but this couple's process took 11 days (not counting the 17 needed to remove their old roof.) But it is taking the program to 17 states. From the story, emphasis mine:

The new systems are just starting to dot neighborhoods in California, with Tesla customers taking to YouTube and Instagram to spread the word. PG&E, the dominant utility in Northern California, doesn’t break down statistics by company but has roughly 450,000 residential solar customers and connects about 300 new home energy-storage battery systems to the grid each month.

Solar and battery products have been a small, “easy to forget” portion of Tesla’s sales thus far, Alexander Potter, a Piper Sandler & Co. analyst, wrote in a report released late Tuesday. But if Musk means it when he says the business could one day rival the automotive segment of Tesla’s business, “investors will eventually need to pay attention,” he said, raising his price target by 27% to $928, the highest on Wall Street.

A typically Musk-ian bold claim to make. But as the story notes, the Solar Roof program has been kind of a fraught one. Tesla's 2016 acquisition of SolarCity was challenged by shareholders in court, and since every director but Musk settled, the case is actually going to trial in Delaware next month.

(Curiously not noted in that story are SolarCity's past financial ties to SpaceX, or that SolarCity co-founder and former CEO Lyndon Rive is Musk's cousin, which raised some eyebrows, to say the least. There's a lot more on that controversy at Business Insider.)

The continued deployment of the Solar Roof program, and the legal case around it, will be worth keeping an eye on.

Once again, the job you do not want is that of Makoto Uchida, Nissan's new CEO and aspirational cleanup artist. Today's challenge for the troubled automaker: the coronavirus outbreak, which as we've covered repeatedly here on Speed Lines, is having a disastrous impact on the global auto parts supply chain. Here's Automotive News:

The Japanese carmaker procures more than 800 parts from factories in the outbreak epicenter of Hubei to make cars worldwide and is concerned that most of those components — ranging from brake hoses to air conditioning controllers — will run out if plants in the province stay idled beyond Feb. 21, when the government has signaled that production could resume for most companies, according to one of the people, who asked not to be identified discussing a private matter.

The shortage could lead to some Nissan car output in Japan to be suspended as soon as Feb. 23, followed by Malaysia soon after, the person said. Further delays could mean plants in the U.S., U.K., India, Mexico, Russia and Spain also have to stop production, the person said.

Nissan’s woes provide a glimpse into the challenges that have arisen since China locked down Hubei, the country’s fourth-largest vehicle-manufacturing hub. Cars comprise about 30,000 parts — roughly 100 times what goes into a phone — making automakers and their supply chains particularly vulnerable to cataclysmic events such as the coronavirus outbreak and the 2011 earthquake in Japan.

As that story notes, coronavirus could reduce total car output by 1.7 million units, "more than what industry leader Volkswagen Group produces globally in any given month." I can't think of a single automaker that won't take some kind of a bath over this, but it's definitely a headache Nissan doesn't need on top of everything else lately.

The 'Tinder of Transport'

Today in "Who Asked For This" (let me know if you want me to make that an occasional series on new startups) we have France's BlablaCar, which is being billed as a Tinder-esque approach to ride-sharing. First, I can't get over that name, because it just makes me think of this. Second, despite the romantic tagline, it's basically an app for hitchhiking, or at least carpooling.

BlablaCar made a profit in 2018, though it won't say how much, and it's hoping to scale further by going public eventually, reports Bloomberg:

“The goal at some point is most likely to go public,” Brusson, in jeans and black Ferragamo sneakers, said in an interview at the company’s central Paris headquarters. “The way I see it, we’re happy to be private for another couple of years. For now we are building a sustainable, growing business.”

Concerns over climate change and higher transport costs, as well as government incentives for shared commutes are fueling car-sharing. On Feb. 6, BlablaCar said revenue last year jumped 71% as it added 17 million new subscribers. About 21 million passengers traveled on its service in the fourth quarter, a 38% increase over the year-ago period.

Silly as it sounds—and it does sound extremely silly—BlablaCar made out quite well during France's public transit strike in December and January. Said to be Europe's biggest carpooling company, we'll see if it makes it our way eventually.

Uber Drivers Empowered To Say 'No'

One more on the ride-hailing front: a new law in California may keep you from booking some absurdly long ride in an Uber there. From Wired:

But in January, in response to a new state law, Uber changed the workings of its driver app in the Golden State, affecting some 395,000 drivers. Drivers can now see where a rider wants to go and an estimated payout before they accept. They are, theoretically, not punished by the Uber algorithm for rejecting too many rides. (Though starting last week, Uber began sending fewer requests to those who reject or cancel the vast majority of their ride requests.) Driver bonuses are structured differently. And around three California airports, Uber is experimenting with allowing drivers to choose their own fares.

Gabe Ets-Hokin, a writer and ride-hail driver around San Francisco, has embraced the same strategy. “When it became clear to me that Uber was not going to fire us for excessive cancelation or for declining rides, I started doing it whole hog,” he says.

In case you're wondering, yes, the changes were caused by Assembly Bill 5, which creates additional protections and regulations around freelance contractors and gig workers.

Is the Solar Roof really The Next Big Thing at Tesla?