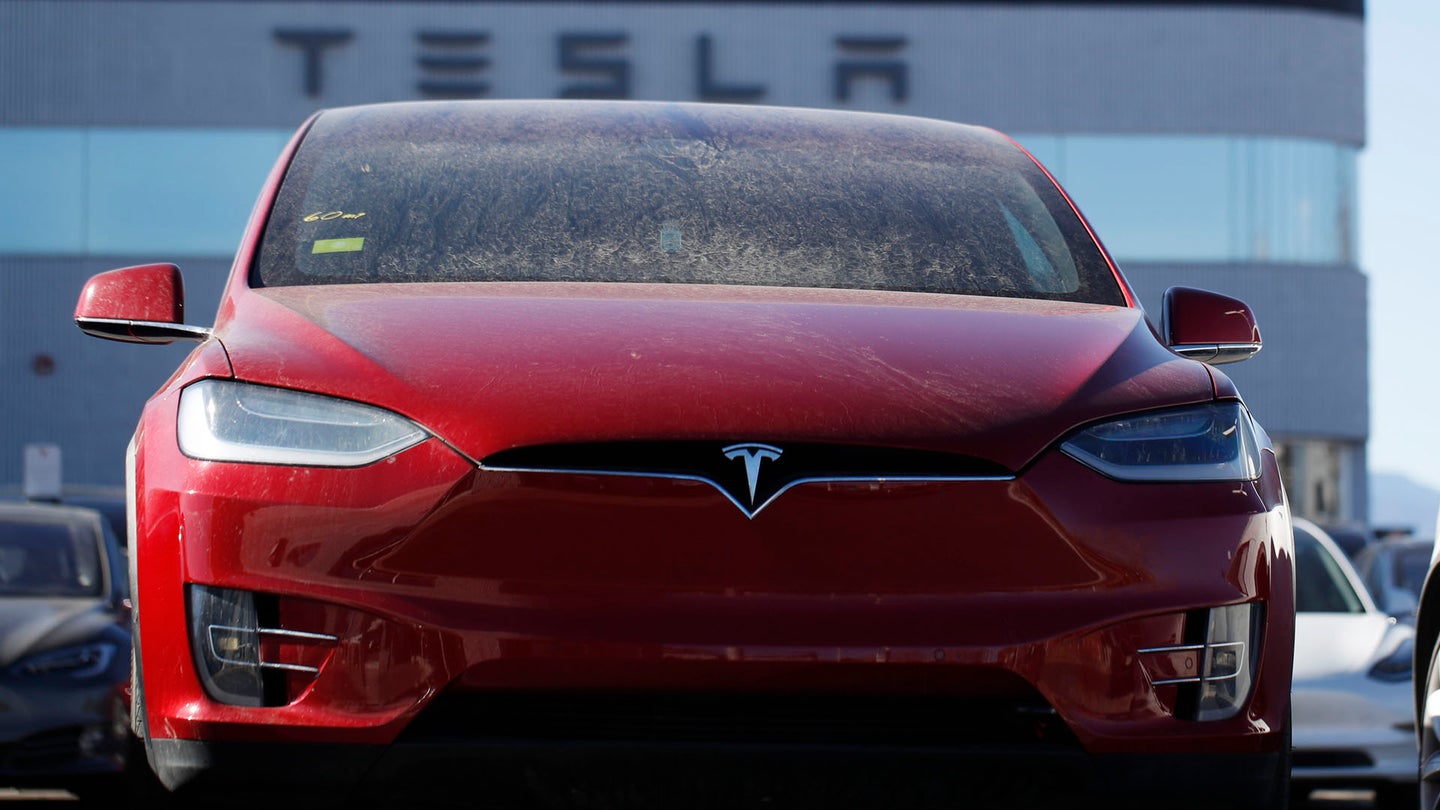 Good morning and welcome back to Speed Lines, The Drive's morning roundup of business news from the world of cars and transportation. No matter what else happens, it's Friday, and nobody can take that away from us. Now, onto some news about Tesla, pickup trucks and how Germany and its industrial sector are handling the pandemic.

Get Back To Work, Elon Says

On Thursday, California Gov. Gavin Newsom tweeted that after weeks of lockdowns, the state will allow for certain businesses like retailers, warehouses and factories to reopen with strict safety guidelines.

Naturally, this came as great news to Tesla CEO Elon Musk, who has been consistently wrong on coronavirus matters since the beginning of the year and is itching to get his Fremont factory up and running again. After tweeting a resounding "Yeah!!" in response to Newsom, he emailed his employees a brief memo to announce production would restart Friday afternoon—today, a few hours away from this writing.

Like every other titan of industry, Musk is eager to get his factory reopened. This is a crucial year for Tesla with the Model Y crossover launch, a record year for production and profits in 2019, expansions into other markets and Musk's own big payday on the horizon.

The thing is, as Bloomberg notes, Newsom is deferring to county governments as to when and how things should reopen. California is a big place and not every area of the state has been impacted equally. And Alameda County, where the Tesla plant is located, is under restrictions until later this month:

What Musk didn’t mention in his memo is that Newsom also said earlier that counties could remain more restrictive than the state. Alameda County, where Tesla’s plant is located, said it was leaving in place its health order that contributed to the company idling its plant on March 23.

[...] But Alameda County, which is home to Tesla’s plant in Fremont, said in a statement Thursday that its current health order, which extends through the end of May, takes precedence.

“We will continue to work with our community and business leaders to accomplish careful, measured progress that allows us to maintain our gains as we move forward to further reopening and better times ahead,” Alameda said in a joint statement issued by San Francisco Bay area counties and cities.

So once again, Musk is clashing with county government officials. I suppose we'll see what happens today, and whether Tesla's workforce will actually show up or not.

Meanwhile in Michigan, home to a substantial chunk of American car production, Gov. Gretchen Whitmer has authorized factories to reopen Monday, May 11. That lets the supplier plants get back up to speed ahead of the May 18 date targeted by the U.S. automakers. Via CNBC:

“It’s going to be a phased-in reengagement,” Whitmer said during a news conference Thursday, citing the auto industry is crucial to reopening the state’s economy.

Whitmer said the Detroit automakers have come to an agreement with the United Auto Workers union to restart production at 25% capacity. Automakers are expected to conduct pre-production work at their assembly plants next week.

The next two weeks will be big ones for American car manufacturing.

The Trucks Will Save Us

One big story from this week is pickup truck sales, and how they're a lone bright spot for U.S. car companies. While sales are way, way down thanks to the pandemic and the depression, truck sales are about the only reason General Motors squeezed out a Q1 profit. With deals and incentives at crazy levels, they may be the only thing keeping the lights on for a bit at those companies.

As The Detroit News notes, somehow, truck sales are back to their pre-pandemic levels as of the end of March:

Ford, Chevrolet, GMC and Ram dominate the U.S. truck market, and pickups have led a broad recovery of autos since the sales trough in late March. After falling by one-fourth the week of March 29, truck sales rebounded quickly. About 24,500 trucks were sold last week — just 1% off pre-virus forecasts.

That boost has helped defy predictions that overall vehicle sales would crater by 80%.  According to J.D. Power, overall retail sales have been on the upswing for five straight weeks, with sales off only 38% last week from predicted, pre-virus levels.

But the demand has eaten into truck inventory levels, which are now half their normal levels with production idled across North America. When plants of Detroit automakers begin reopening May 18, automakers say their first priority is to rebuild supplies of those trucks that have been so beneficial to their bottom lines.

And that's why the automakers are in a rush to get factories open again. At least one Dallas-area Ford dealer interviewed by the News said his truck inventory is fine, for now, but "it's also Explorer and Escape inventories that have us concerned." Regardless, expect truck and SUV sales to be what carries the automakers through this unprecedentedly hard year.

But what concerns me is this: can people actually afford these trucks? The most profitable ones aren't exactly cheap; we're talking $50,000 in many cases, sometimes more. Unemployment is skyrocketing, jobs are vanishing, and while deals are great right and credit is easy, delinquencies and subprime loans are at all-time highs. People are buying trucks, sure, but are we headed for a market crash if they can't make their payments?

Hope feels in short supply these days. But as hammered as we are physically and economically by this virus, it can be beaten. The Western country that's probably done that the best is Germany, itself a powerhouse of automotive manufacturing and a key player in the global economy. BMW, Mercedes and Volkswagen want to get factories open and profits back up as much as any American automaker.

Germany's measures in controlling the virus have worked exceedingly well, despite relatively mild restrictions on manufacturing and the rest of the economy. It is the world’s sixth-most-affected country, but has one of the lowest death rates.

This story from the Wall Street Journal is worth a read on how the Germans pulled this off:

The state of Baden-Württemberg, in southern Germany’s industrial heartland, is a good example of how Germany’s states, whose prerogatives include both health care and the rules governing business activities, have tackled the challenge.

The affluent region is home to car makers Daimler AG and Porsche and thousands of engineering companies that contribute to the country’s mammoth trade surplus. It was hit hard and early by the pandemic and still has the country’s second largest number of patients per inhabitant.

Yet the state, ruled by a cross-party alliance between a Green premier and Ms. Merkel’s center-right bloc, has run one of the country’s most vigorous and successful campaigns against the virus.

“We had an early and consistent containment strategy,” said Manfred Lucha, the state health minister. “We saw the tsunami rolling toward us, and we built up our hospital, care and diagnostic capacities even before it hit us.”

Mr. Lucha’s government quickly set up 160 special clinics for Covid-19 patients to dispense immediate and tailored care without allowing the virus to enter the hospital system, all the while gathering valuable data about the spread of the epidemic. With support from the state government, Mr. Lucha said, local clinics developed their own tests that could quickly be manufactured en masse.

[...]  The state government also tapped Baden-Wurttemberg’s two biggest university hospitals, in Ulm and Tübingen, to help it draft a strategy for coronavirus patients known as “test & treat”—mass testing among risk groups such as the elderly, and immediate treatment for infected people before they display severe symptoms.

As a result, the number of hospitalizations dropped, and Baden-Württemberg today has more unoccupied ventilators than Spain and Italy together, said Mr. Lucha.

In other words, it can be done. There are huge differences between the U.S. and Germany in terms of its health care system and how state governments operate, but it's proof that these challenges are surmountable if attacked correctly.

The death of a video store (AV Club)

How do you think the American auto factory restart will go? What will we be writing about a month from now?