"If anyone is arrested, I ask that it only be me." - Elon Musk 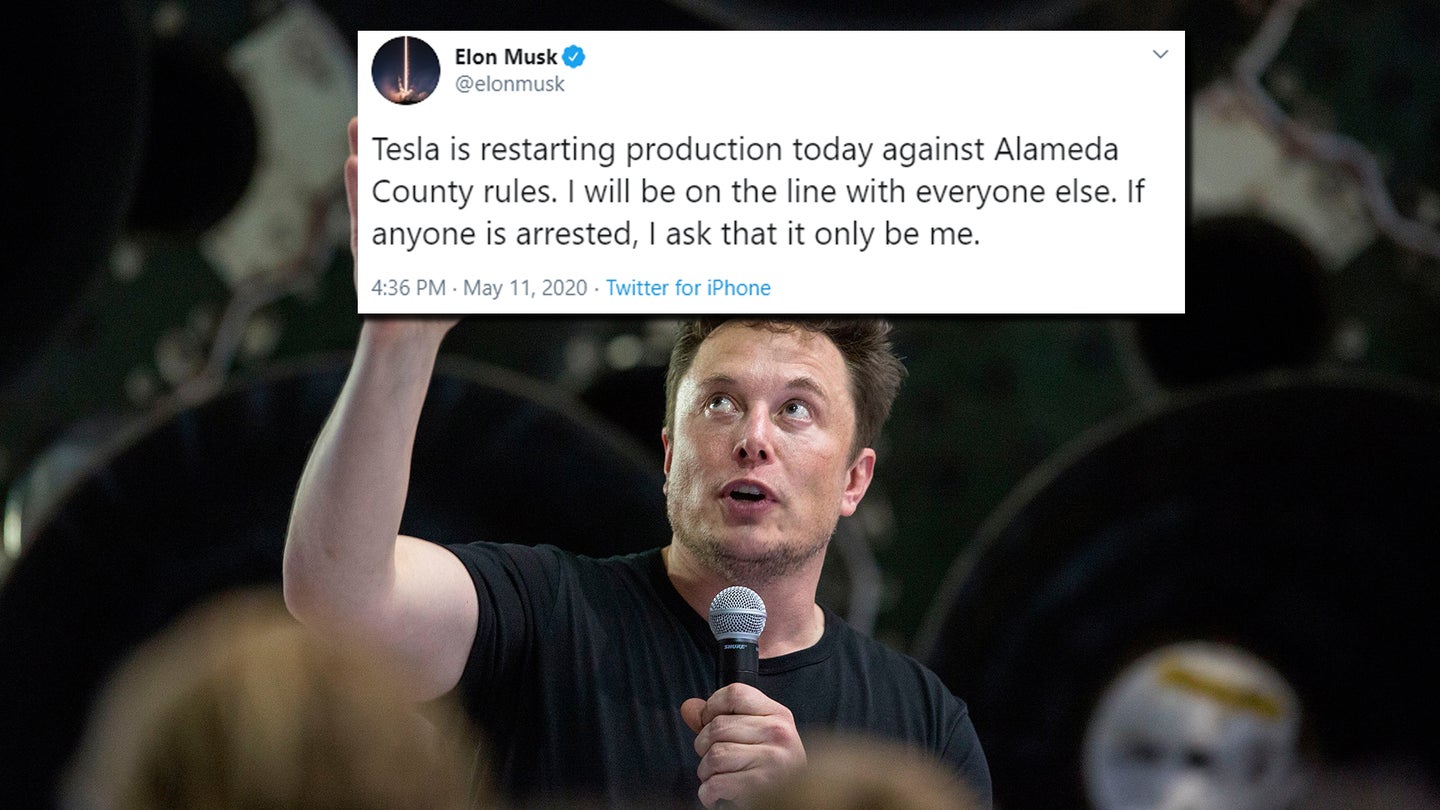 Tesla CEO Elon Musk says the automaker will resume vehicle production today at its assembly plant in Fremont, California despite local officials ordering the plant to remain closed amid the ongoing COVID-19 pandemic.

Musk confirmed the rumor on Twitter, announcing that Tesla was restarting production in defiance of directives supplied by Alameda County which explicitly ordered the facility to remain closed. Furthermore, Musk seemed to accept the possibility of his own arrest, though he said he requests it "only" be him if it comes to that.

Musk's tweets—and apparent defiance—are the latest salvo in an ongoing war between him and county officials where his factory is located.

Last Thursday, California Gov. Gavin Newsom announced that lower-risk industries would be permitted to begin reopening, which included manufacturing facilities. Musk took notice and aimed to reopen the plant the following day. According to CNBC, Tesla began reaching out to workers to schedule shift as early as Friday, May 8, but was met with opposition from Alameda County officials. As it turns out, Newsom indicated that local governments were still granted authority to remain more restrictive than statewide ordinances.

According to the New York Times, one of Alameda County's district supervisors, Scott Haggerty, was working with Tesla to iron out the fine details on a reopening plan. Specifically, the supervisor and company had tentatively agreed to May 18th as an opening date (the same date as Ford, GM, and Fiat Chrysler), however, Musk demanded the Fremont plant be permitted to reopen the week of May 8th.

“We were working on a lot of policies and procedures to help operate that plant and quite frankly, I think Tesla did a pretty good job, and that’s why I had it to the point where on May 18, Tesla would have opened,” Haggerty told the newspaper. “I know Elon knew that. But he wanted it this week.”

On Saturday, Tesla filed an injunction against Alameda County in order to lawfully restart production at its California production facility. On the same day, the automaker released a blog post titled "Getting Back to Work" which outlined the reason behind the legal action and automaker choosing to restart production, despite local ordinances requiring the automaker to remain closed. Musk has also intimated on Twitter that this is "the last straw" and that he could move Tesla to Texas and/or Nevada moving forward.

Despite Musk making the announcement that the plant would reopen, it turns out the facility already seemed quite active. Videos of trucks leaving the Fremont facility were posted on Twitter more than two hours before the CEO's announcement. Two employees also confirmed to The Verge that the plant had already reopened prior to the announcement and had completed the assembly of "around 200 Model Y and Model 3 vehicles".

Musk has been quite vocal about his opposition to governmental restrictions imposed during the pandemic, especially by Alameda County officials. In a tweet referencing Tesla's lawsuit against the County, Musk called the restrictions imposed upon Tesla "absurd [and] medically irrational behavior in violation of constitutional civil liberties."

This isn't the first time Musk has taken a stance against COVID-19 restrictions. During Tesla's quarterly earnings called, Musk compared the shelter-in-place order to fascism and forcible imprisonment. He then called upon listeners to reflect upon their rights and officials to "give people back their goddamn freedom."

Musk has also been consistently wrong on matters related to the pandemic, falsely stating the U.S. would have "close to zero" cases by the end of April, incorrectly tweeting the virus is no more dangerous than the flu and promoting the controversial and unproven chloroquine drug as a potential treatment.

Now, Musk threatens to leave California altogether. This comes following an unrelated announcement that Tesla is seeking to reveal the location for another domestic Gigafactory before year's end.

Tesla—and ultimately, Musk's—choice to reopen has been one of the strangest negotiation tactics in modern manufacturing history. While other automakers seem to be bound by the fabric of legislation and indeed plan to reopen on May 18, Tesla is attempting to dictate how it will do business and whether risk assessed by the company is acceptable to take. The automaker says it has strict safety guidelines in place learned from its Shanghai factory, but as Business Insider reported today, at least some workers fear losing their benefits and being unable to apply for unemployment if they didn't return to work at Musk's behest.

What's emerging here is a battle between worker safety, or at least the kind deemed necessary by the government, and Musk's desire to get new cars built and sold during a pivotal year for the company and his own potential $750 million payday. Whether he will succeed in making a martyr of himself to some people remains to be seen tonight.