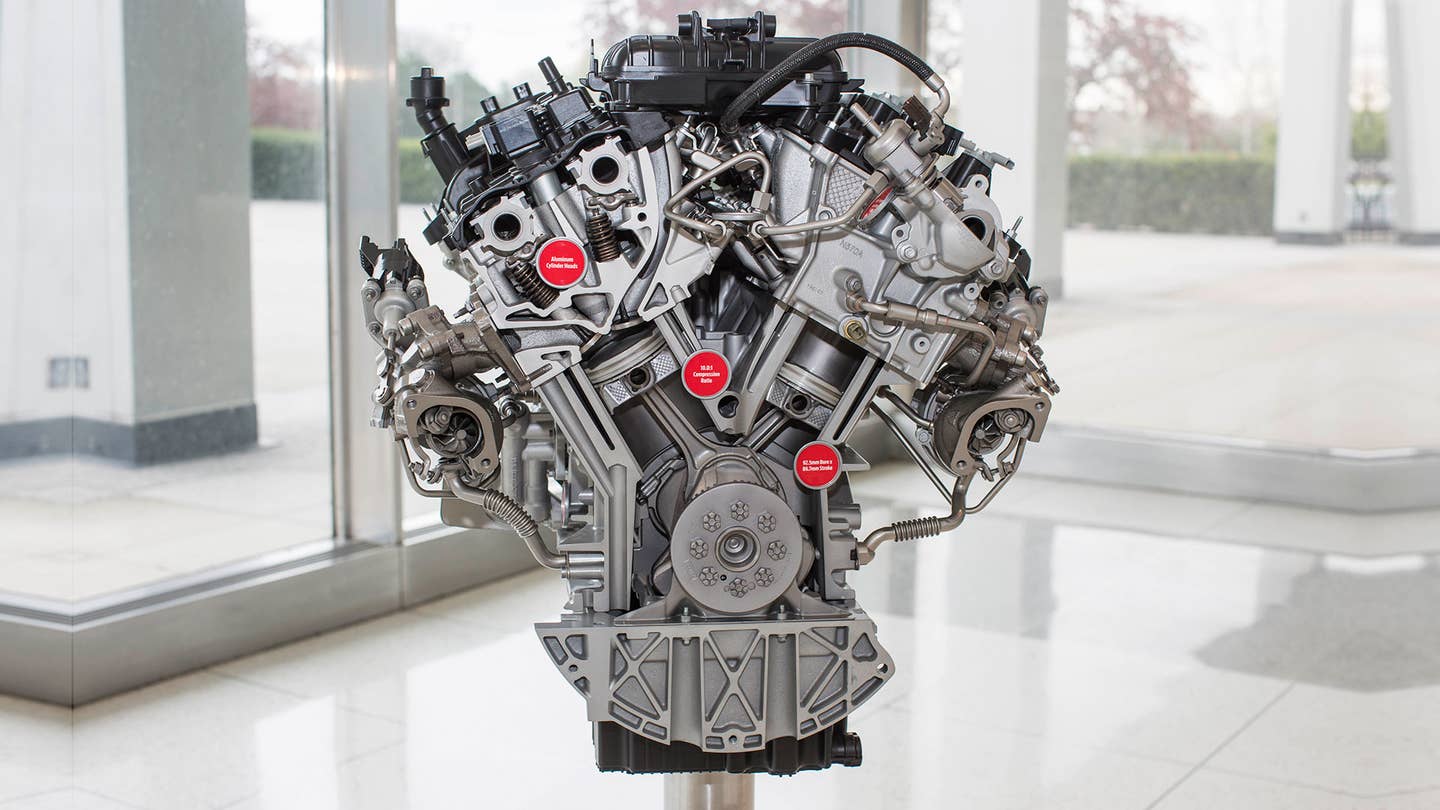 Remember how Ford announced that the 2017 F-150 Raptor would forgo the throaty roar of a V8 for the boosted blast of the car maker's 3.5-liter EcoBoost V6? As it turns out, Ford didn't mean the 3.5-liter twin-turbo V6 that over the last few years has been powering everything from the Taurus SHO to the Lincoln Navigator. Nope, Ford meant a whole new engine. Which happens to have the exact same displacement as the old unit.

We forgive you if you're scratching your head right now, because we are, too.

Like the outgoing engine, Ford says the new 3.5-liter twin-turbo V6 makes exactly one horsepower for every day of the average calendar year: 365. But twist has been cranked up by 30 lb–ft, bringing the total output up to 450 torques. That's enough to push it well past the figures for the Ram 1500 and Tundra, but not quite enough to knock the 6.2-liter V8-powered Silverado from the top of of the half-ton pickup torque heap.

In spite of the similar specs, there's a fair amount of updates lying beneath the engine cover. Stop-start functionality now comes standard, much to the joy of EPA regulators and to the irritation of automotive journalists. The motor uses a new fuel injection system that utilizes both direct- and port injection, which helps boost efficiency and tamp down emissions. The turbochargers themselves are all new, featuring electronically-activated waste gates and a lighter turbine wheel made out of what Ford describes as a "high temperature super-alloy." All told, the updates add up to four whole pounds of weight reduction compared to the previous motor. That's roughly the weight of this adorable Maine Coon kitten.

But the model-wide move to this "new" engine also means all 3.5L EcoBoost F-150s will be picking up the Raptor's 10-speed automatic transmission for the 2017 model year. It's the same transmission that made its debut in the new Chevrolet Camaro ZL1, but you'd never know that from Ford's press release. Indeed, FoMoCo's language almost doth protest too much: the release specifically describes the gearbox as "Ford-built."

Still, any possible insecurities about the transmission's origins aside, the new gearbox has the potential to make a big difference in how the F-150 drives. Compared to the previous six-speed automatic, the 10-speed 'box has a wider ratio spread complete with three overdrive gears. All those cogs mean it should be easier than ever to keep the torque-y six in the meat of its power band—or to chug along the highway at barely above idle. It even comes with a sport mode, on the off chance you feel like carving up the Tail of the Dragon in your three-ton pickup truck.