Media days are done in Paris—enjoy the nine most exciting cars of day two. 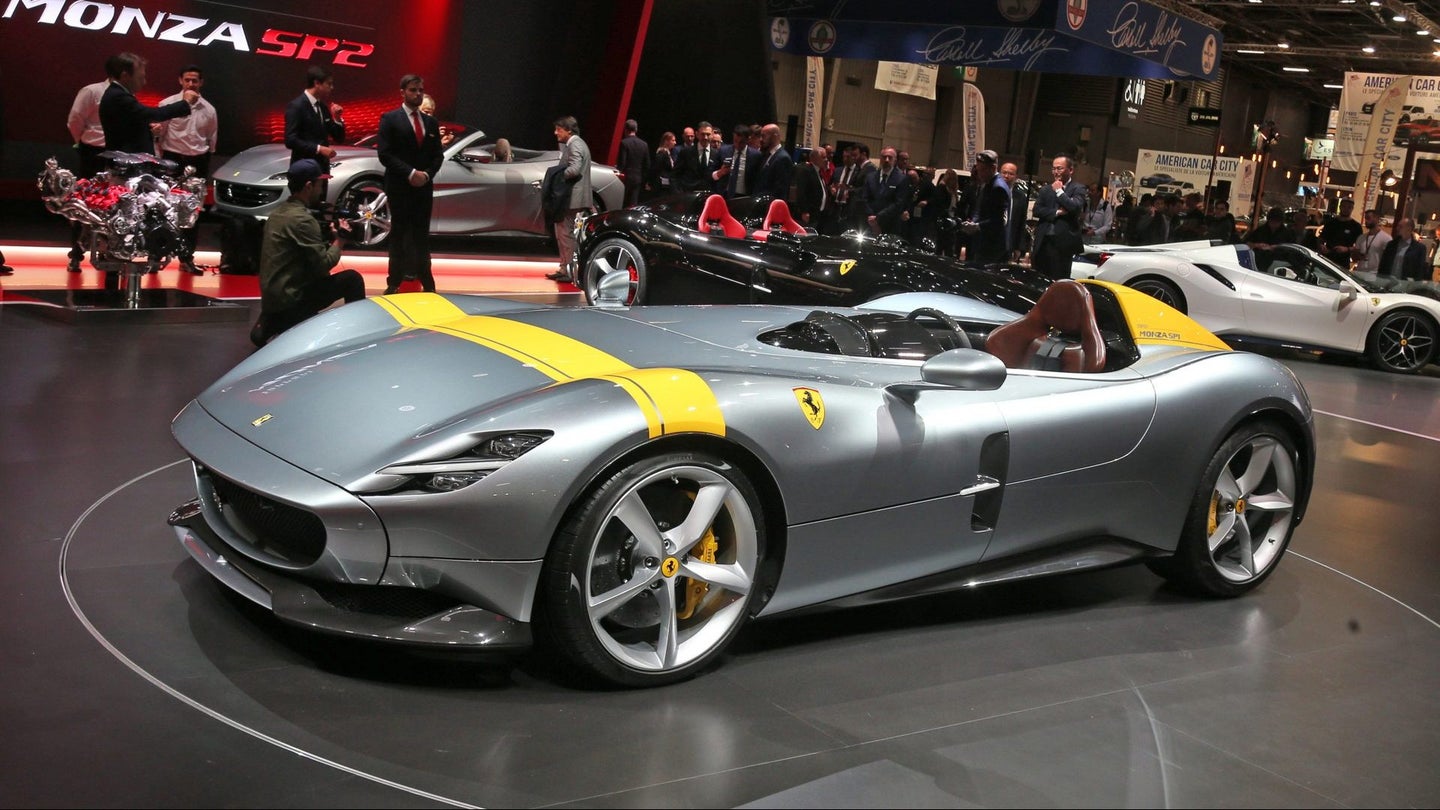 The doors have closed on the second day of the 2018 Paris Motor Show, and to celebrate its completion, we've compiled nine of the best reveals from Wednesday in France.

Wednesday, automakers showed off a colossal variety of vehicles on day two, ranging from market-bound crossovers to limited-edition supercars and visionary concept cars. We've organized them in ascending order toward what has us most excited—be sure to check our day one rankings too.

Audi rolled out the carpet for its SQ2 sporty compact crossover. A 2.0-liter turbo engine breathing up to 1.4 bar (20 psi) of boost makes 296 horsepower for the SQ2's all-wheel-drive system to shuffle around as it sees fit. Zero-to-60 slips away in 4.8 seconds, and the SQ2 will bounce off its limiter at 155 miles per hour. Want one? Move to Europe. Audi won't sell them in the United States.

Two Audi crossovers in a row? Yes, but there are big differences between them, most notable being that the e-Tron will be the first electric vehicle Audi brings to market. The $74,800 crossover was expedited to market when Audi saw demand for electric vehicles (crossovers especially) booming, and it boasts a 249-mile range out of its bulky 95-kilowatt-hour battery, somewhat low drivetrain efficiency for a modern electric vehicle. The e-Tron will be able to utilize 150-kW fast charging to offset its underwhelming range, though, which will allow a full charge in a half hour.

It may look like it's squatting to mark its territory, but make no mistake: the Hyundai i30 Fastback N is one hot hunchback. With the performance package, its front wheels will scramble away at the pavement with 272 horsepower and 260 pound-feet of torque, the power coming down from a 2.0-liter turbo four-pot through a six-speed manual transmission. Its top speed is 155, and it can manage zero-to-60 in 6.1 seconds. But since Hyundai isn't selling the i30 here—let alone its caliente N variants—we'll have to settle for the Veloster N.

In case Toyota's rambunctious Yaris GRMN is a little too energetic for your tastes, there's now a middle ground Yaris GR Sport. It rides almost a half inch (11 millimeters) lower than the standard Yaris and features a stiffer sway bar, Sachs shocks, and black 17-inch alloy wheels wearing Bridgestone Potenza RE50 tires. Body details are redone in black, such as the roof and rear spoiler, while red highlights are optional. Sadly, no Yaris for the States means no Yaris GR Sport for us.

Every component of BMW's revitalized Z4 roadster is new from the ground up. So much is improved that the Z4 M40i beat the pricier, more-powerful BMW M2 around the Nürburgring, by a margin of several seconds. In case the Z4 M40i isn't quite enough of a dose of speed, Toyota's upcoming Supra will be built on the same chassis as the Z4, as the two automakers split development of the handsome new platform siblings. The fixed-roof Supra should be faster on even terms, and Toyota is playing with the idea of a hardcore track variant.

The Project Black S is a mild hybrid sports coupe that you can call anything but mild. It borrows tech from Infiniti's sister company Renault, whose Formula 1 engine components such as the MGU-K and MGU-H are tacked on to the Project Black's 3.0-liter, twin-turbo V6 to make 563 lag-free horsepower. Zero-to-60 is gone in under four seconds, which is remarkable for a rear-wheel-drive vehicle weighing about 3,900 pounds. If this finally makes you covet an Infiniti, forget it, because Infiniti has no plans to advance the Project Black S beyond the concept stage.

Unlike the above, Porsche announced in Paris that its slim 911 Speedster concept from earlier in 2018 will be going into production. Limited production, with only 1,948 units planned, as a tribute to the 356 Speedster that Porsche introduced in 1948. The 356's signature paint color Guards Red will be copied onto the new 911 Speedster too. A naturally-aspirated flat-six that revs to the sky and makes more than 500 horsepower will be used in conjunction with a six-speed manual transaxle to ensure the car is a true driver's dream.

Ferrari's new barchetta SP1 and SP2 sisters of its "Icona" series are one- and two-seater supercars respectively. They use the 6.5-liter V12 from the 812 Superfast, albeit with an extra 10 horsepower for a total of 810, slinging them from zero-to-60 in 2.9 seconds, and up to 120 in 7.9. Both cars will make extensive use of carbon fiber, justifying their $1.4 million price tags. You don't get a windshield for that money, though, as Ferrari expects you to wear a helmet while flinging its creations around racetracks.

Most exciting of all is Peugeot's retro electric vehicle concept, which it calls e-Legend. Its style is a throwback to its classic 504, which remained in production in some parts of the world through 2006. Though just a concept car, Peugeot says its 100 kWh battery is good for 373 miles of range, and its electric motors for 456 horsepower and 590 pound-feet of torque. Whether the driver or the car is in charge of the e-Legend's retractable steering wheel (Peugeot say it'll be capable of driving itself), it'll apparently manage zero-to-60 in less than four seconds. Hopefully, it'll also manage to make it beyond the concept stage, as we'd be delighted to drive the real deal.

We’re just a day into the 2018 Paris Motor Show, but that doesn’t mean there isn’t a lineup of the best-in-show so far.

It has a wooden floor, leather seats, and a marble table. All are presumably cognac-resistant.