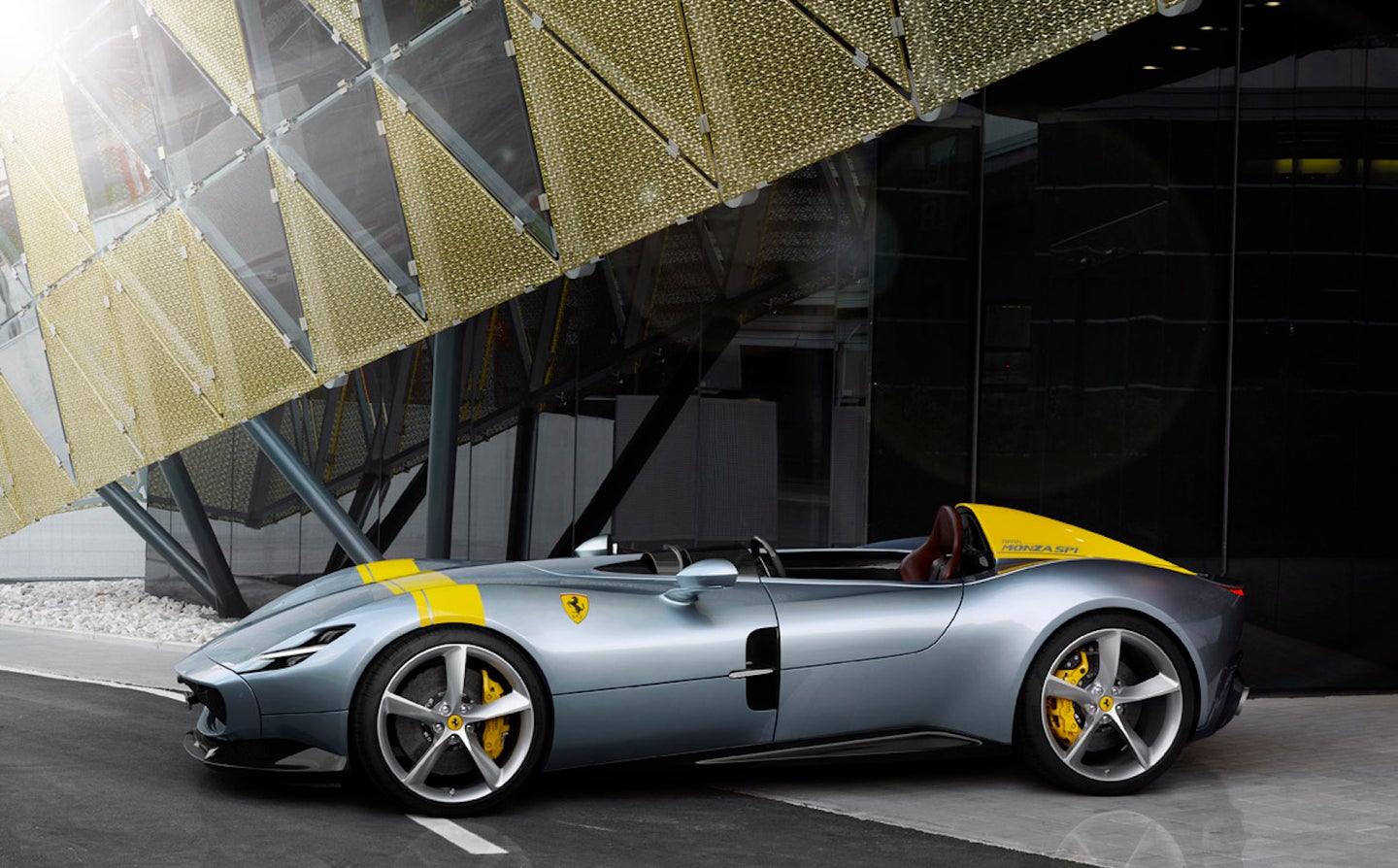 It's been a big week for Ferrari. Just last night—before today's unveiling of the limited-edition Ferrari Monza SP1 and SP2—the Italian carmaker opened the doors to its new Centro Stile studio. A dazzling structure covers the entire front of the building, sheathing it behind a geometric façade of gold, gilded aluminum, and glass. This scaffold-like blanket was conceived to hide the design work being done within the secretive building’s walls, and also to hypnotize the eyeballs of all who walk by.

Today is the first time members of the press will walk through Centro Stilo's glass doors. We stroll past the new upholstery workshop and Tailor Made atelier to an ultra-modern auditorium crowned by a ring of high-def screens and amphitheater seating. After some words from Design Chief Flavio Manzoni and newly minted CEO Louis Camilleri, the lights dim and a blinding light show rivaling a corny EDM headliner fills the room. At its blaring conclusion, Mr. Camilleri pulls the red sheets to expose the sleek yet eyebrow-raising oddities before us: the Ferrari Monza SP1 and SP2.

The pair of supercars are limited-edition special-series coupes—the SP1 being a single-seating ode to solipsism, and the SP2 a more traditional two-seater. We’re told these are only the first offerings from a new family of Ferraris dubbed Icona—a new category (along with Sport, Gran Turismo, and Special Series) that casts its eye back at Ferrari’s rich history to select muses to update into the 21st century.

These twin future collectibles draw inspiration from distant cousins of the 1950s and ‘60s, such as the 750 and 860 Monza, as well as the original barchetta: the 1948 166 MM. Although barchetta literally means boat-tail, the name has come to signify racecars without windshields. And so, naturally, both of these 2020 models similarly lack glass screens. And roofs.

Instead of glass, the SP1 and SP2 will rely on an innovative tech Ferrari is dubbing “Virtual Wind Shield”—an aerodynamic carbon fiber funnel in front of the driver that sucks air down and then shoots it up in a 90-degree angle, creating an invisible shield that tunnels the wind from the driver’s face. The SP2 will exorcise the SP1’s tonneau cover and add a second roll bar and virtual windshield.

Which passengers will need, given the Monza SP’s will feature the most powerful non-electrified Ferrari engine ever built. A tweaked version of the 6.5-liter V12 from the 812Superfast is boosted to provide 10 more horses, or 810-hp total, and will deliver the Monzas from 0-100 km/h in 2.9 seconds, and up to 200 km/h in 7.9.

Built on the 812’s chassis, the Monza SP’s will also feature a ton of carbon fiber bodywork, the best power-to-weight ratio of any barchetta, scissor doors, and a front-hinged one-piece carbon-fiber hood designed to showcase its V12 lump.

There’s also a variation of Ferrari’s new hyper-aggressive headlamp design, and a long horizontal tail lamp running the width of the rear — everything all LED. And its shockingly long hood hides an engine block placed far ahead by the front axle, curiously distant from the firewall. The SP1 is especially illogical, a single seater so selfish you can’t even bring your mistress wife along for a spin. Of course, if you’re buying this strano unicorn, chances are you have an entire collection of other horses in your stable, so convenience is hardly a primary concern.

Sure, it’s weird and long, and illogical—but it’s also voluptuous and eye-popping, and will demand attention from even the most jaded or GTO-blinded collector. And to make the limited edition pair even more appealing, the Prancing Horse collaborated with fashion house Loro Piana to create tailor-fitted overalls to wear over your clothing so you arrive at your destination clean and minty. Leather experts Berluti also designed a leather-wrapped carbon fiber helmet and matching goggles, gloves, driving shoes and bag to complete the look. These come for free with either Monza and cannot be purchased anywhere else.

There was no official revelation of how many Monzas would be built or at what cost, but we might have overheard a little bird whispering about 500 will be made, at a cost of around $1.4 million each.