Ferrari made this roadster based on the Ferrari F12tdf at a collector's request, and it is wonderful. 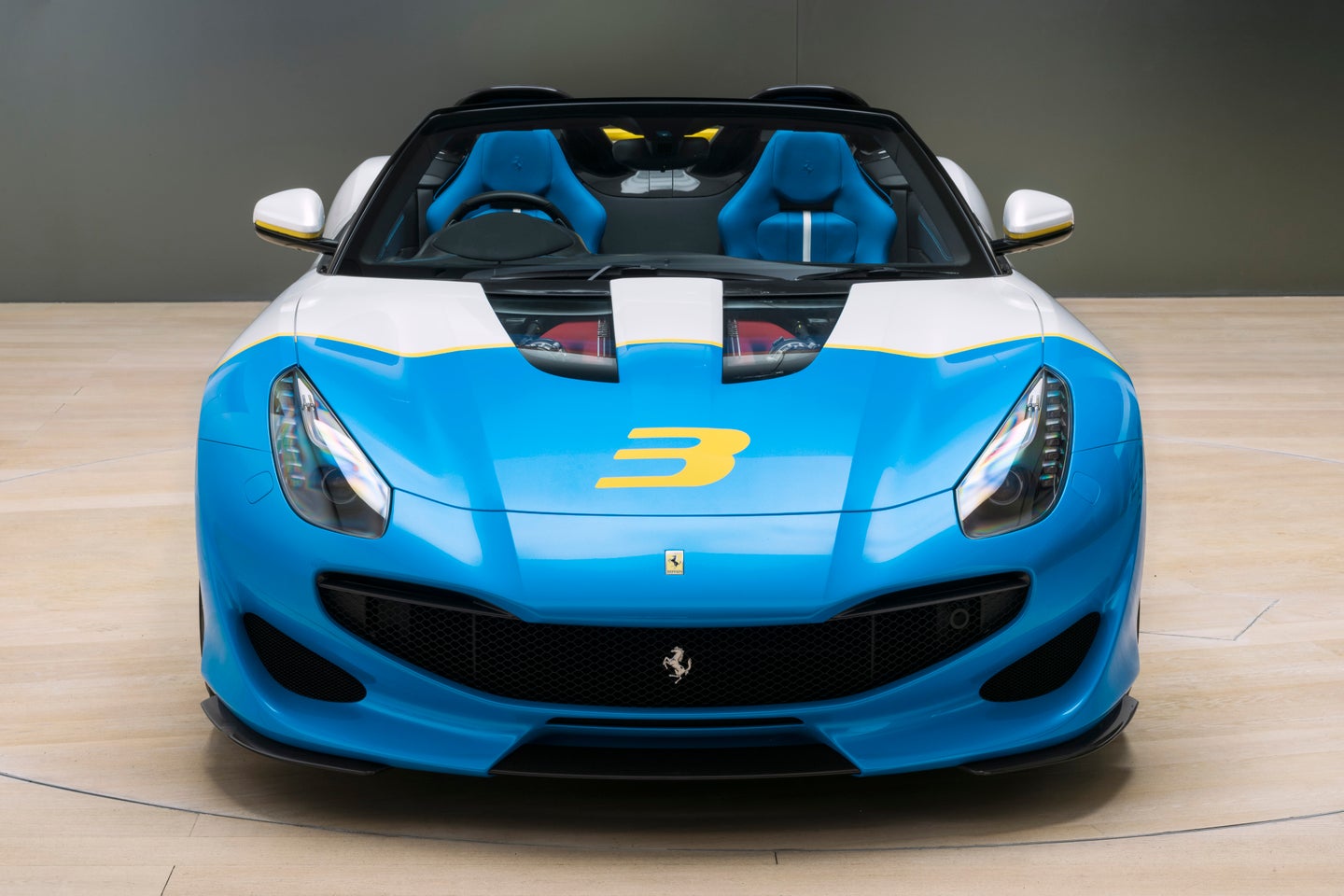 Meet the newest delightfully insane one-off project from Ferrari: the SP3JC. It's a delightful drop-top built using the chassis and running gear of the V12-powered Ferrari F12tdf. The Ferrari Styling Centre designed this car at the request of a collector, and it took the Maranello craftsmen two years to perfect it.

It's the only one-off project based on the limited-run F12tdf, albeit with different bodywork, where the hardcore sports car edges of the F12tdf coupe have been softened a bit.

There's still a clever vent that channels out air in front of the door, but it's not as pronounced as the big air channels that run from the front through the side doors of the F12tdf. The front fascia has changed into a big grin, and the rear of the car now sports horizontal slashes that emphasize the width of the car. The car also features a flying bridge between the fairings of the car's integrated carbon fiber roll hoops and a brushed aluminum fuel filler cap. Split glass inserts in the hood show off its 780-horsepower V12 engine.

The SP3JC is meant to be a throwback to Ferrari's V12 convertibles of the 1950s and 1960s. Thus, it wears a delightfully old-school livery accordingly, with Azzuro Met (blue) on the nose, Bianco Italia (white) on the rest of the body, and Giallo Modena (yellow) accents. According to Ferrari, the client's interest in Pop Art served as the inspiration for this bright livery.

The interior is also upholstered in blue leather with a white insert on the seats to match the outside.

It's this livery that makes it feel just a tad sinister, like the car killed and ate the beloved Sesame Street snacker Cookie Monster in its sleep—and is smiling because it's proud of that fact. Honestly, I'm down with that kind of madness from a big V12 Ferrari. 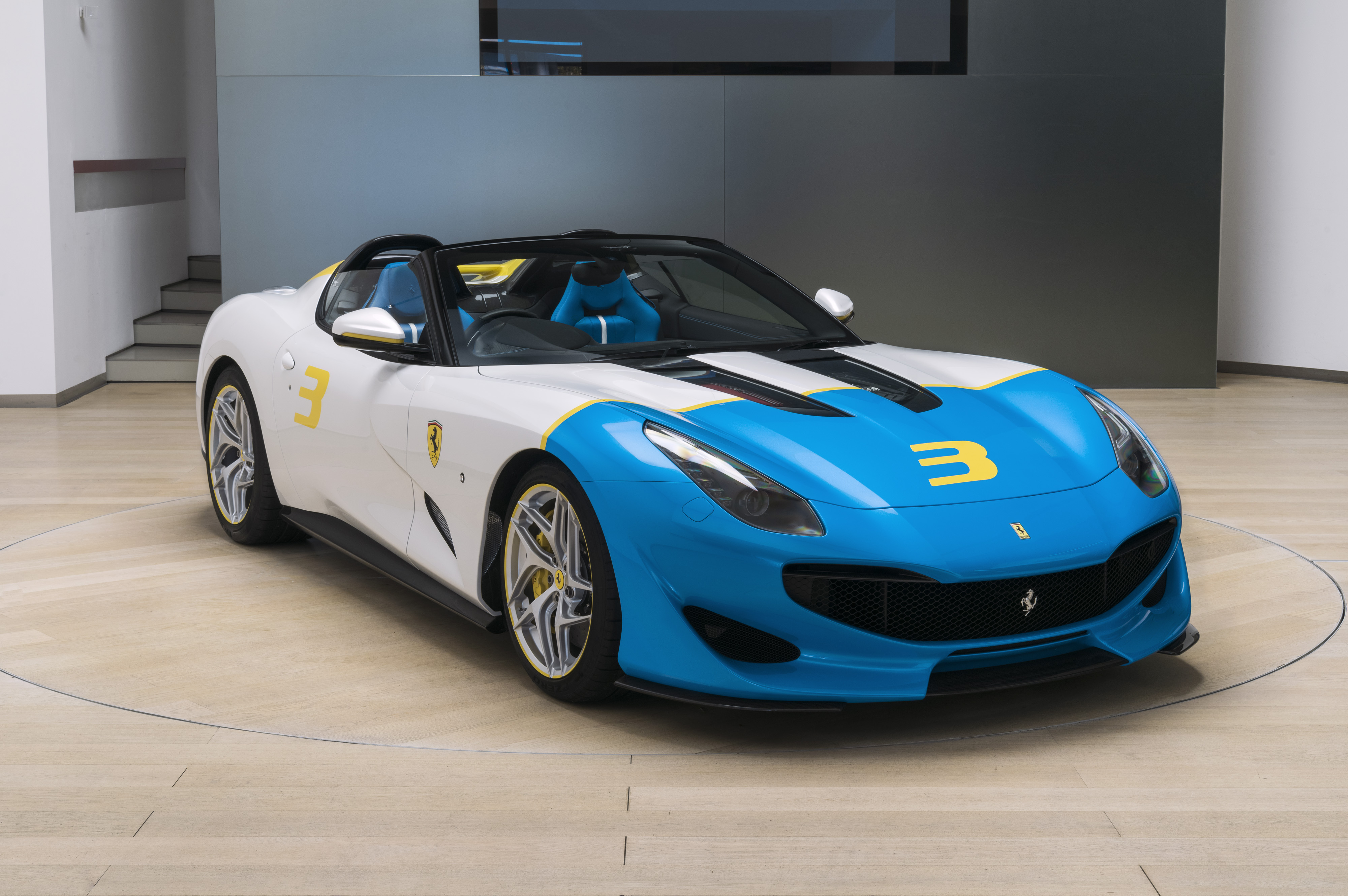 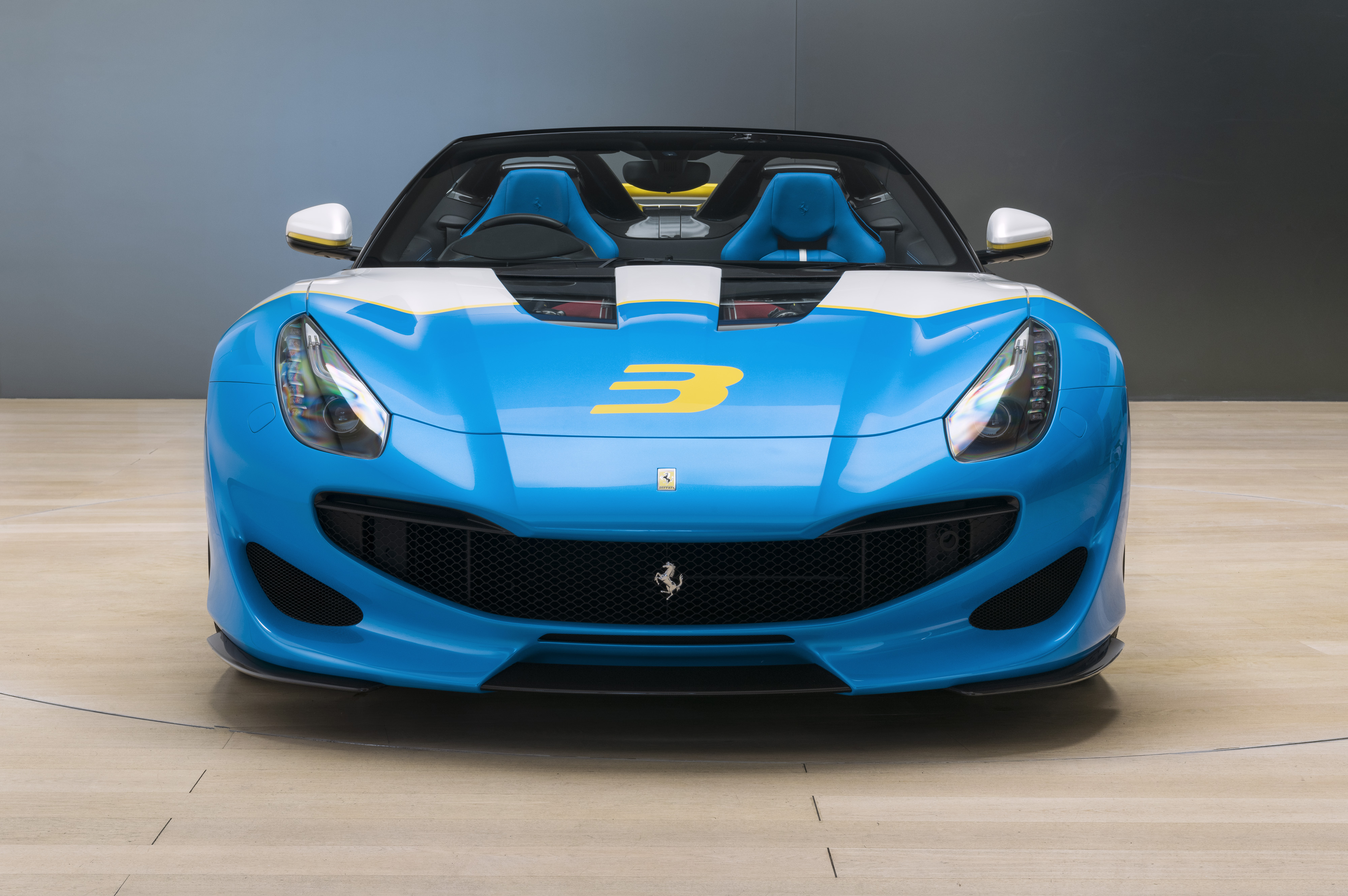 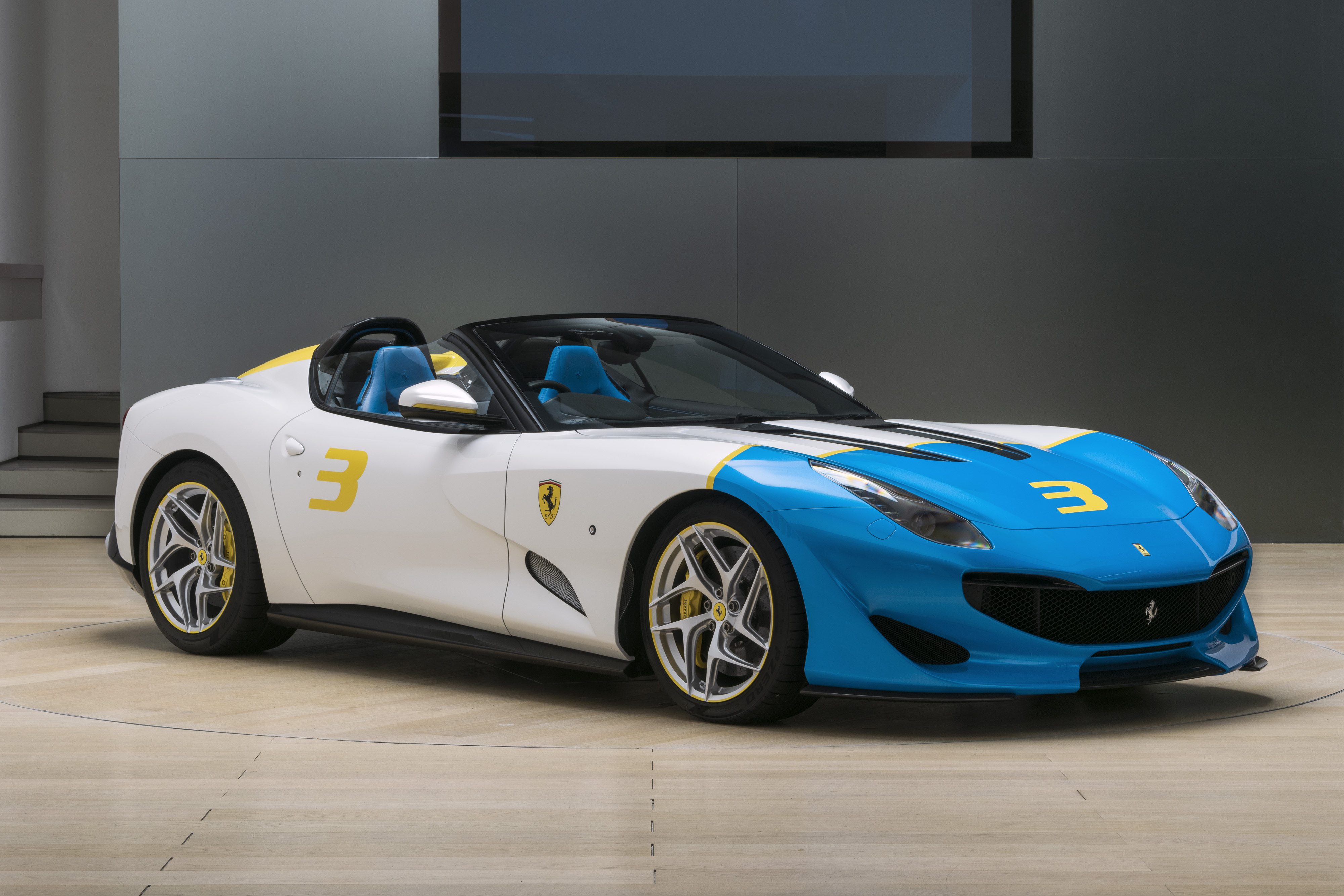 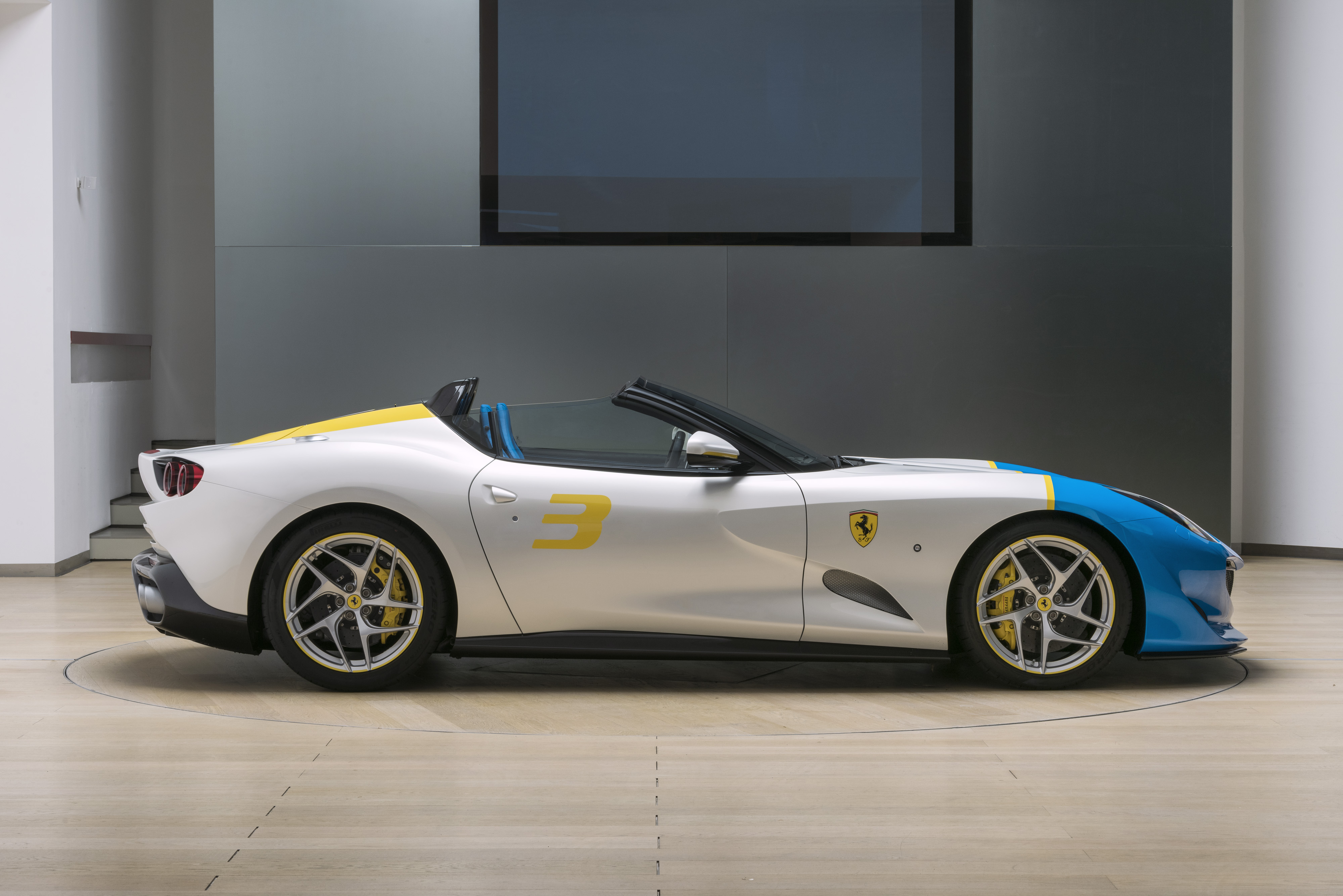