The FXX K Evo promises to be the latest track toy for super-rich Ferraristas. 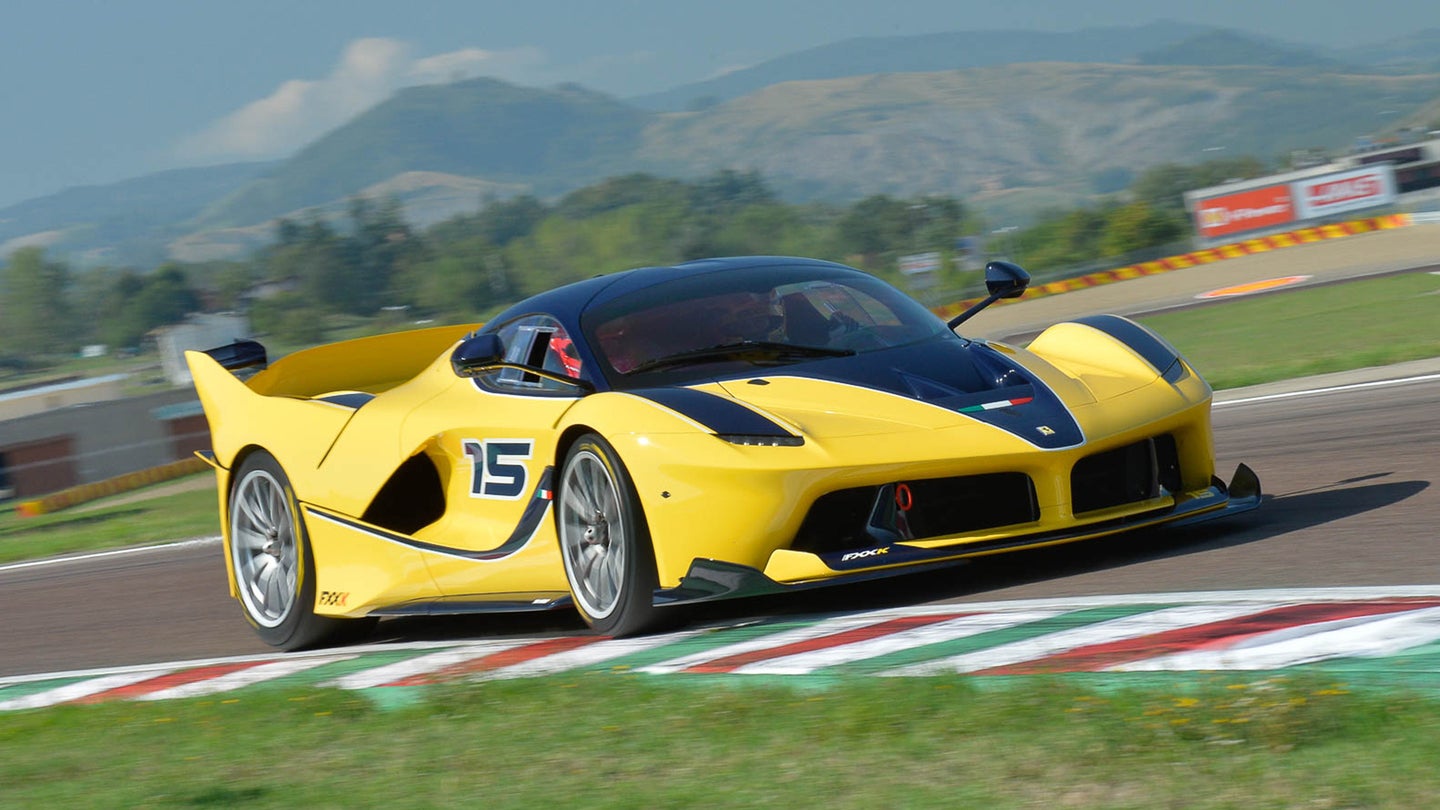 The tiny slice of humans invited into the highest echelon of Ferrari ownership are about to score a whole new plaything. By the time the sun rises over Italy on October 30th, a new hypercar bearing the Prancing Horse will have been revealed to the world: the Ferrari FXX K Evo.

The FXX K Evo will be revealed at the 2017 Finali Mondiali, Ferrari's annual celebration of the brand that combines the last races of the Ferrari Challenge season, a giant car show highlighting some of the carmaker's rarest and most unusual automobiles, and track time for the Richie Riches who are part of the company's Ferrari F1 Clienti and XX programs, in which the creme de la creme of Ferrari owners are invited to fork over millions of dollars to own and drive former Formula 1 racers and limited-edition track-only models based on the company's production cars. It's those folks in the latter group who'll likely be most excited about the new hypercar, as they'll be the only ones ever able to take one home.

Ferrari is being fairly tight-lipped about the car—the announcement made up just one sentence of the carmaker's Finali Mondiali press release—but based on the name and the past cars that Maranello has made as part of the XX program, we can make a few assumptions about it. The Evo name suggests the new car will be an evolution (get it?) of the existing FXX K, a LaFerrari-based track car powered by a 1,050-horsepower version of the hybrid 6.3-liter V12 powertrain found in the road car. (Ferrari admitted the new FXX K Evo will at the very least equal the output of its predecessor, in case you were worried it was going to be slow.) Downforce is up a whopping 50 percent compared with the LaFerrari, and as you'd expect from a vehicle made for the circuit, weight has been reduced in comparison with the street car—by about 200 pounds, in this case.

The previous, Ferrari Enzo-based FXX also offered an Evo version later in life, which could offer some indication as to what we can expect from the new version. The old Ferrari Evo brought upgrades that boosted power, reduced drag, and tweaked the gearbox and traction control system for improved performance; that was enough to knock two seconds off the original FXX's Fiorano lap time, bringing it down to 1:16. If Ferrari can pull off the same feat with the FXX K Evo, that would make it roughly as quick around the carmaker's favorite test track as the 333 SP prototype race car of the mid-'90s.

While odds are good you don't have the cash to work your way up through the echelons of Ferrari ownership to earn a spot in the XX program, you can pop into the 2017 Finali Mondiali and see the new FXX K Evo no matter how rich or poor you might be. Tickets for the event are free; all you have to do is click here. Getting to the Mugello Circuit in Tuscany where it takes place is up to you, though.

You may never own a $2 million Ferrari…but you can see what it’s like to ride along inside one.