A recent spending spree puts the big carmakers on notice: The tech giants aren’t just trying to beat you, they’re trying to replace you. 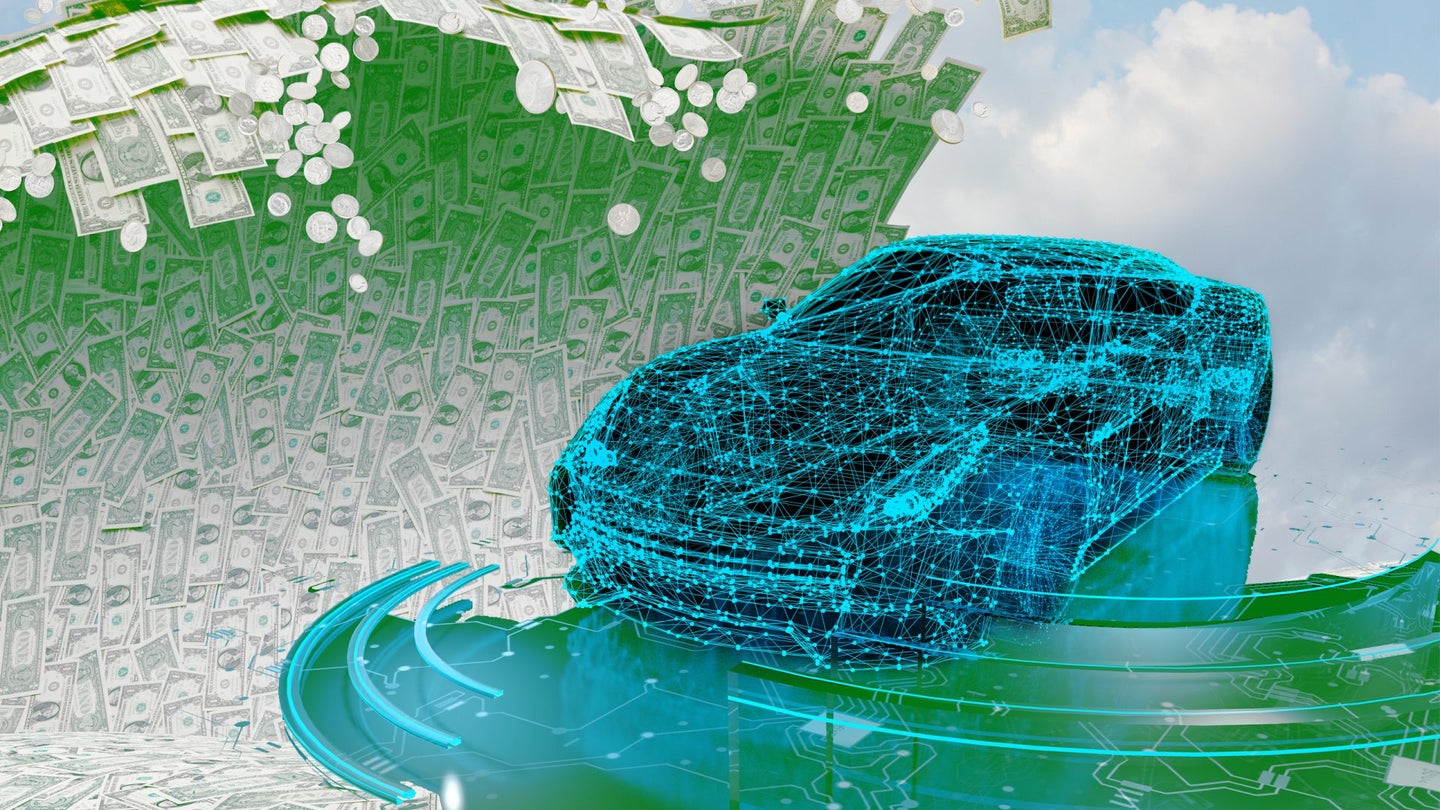 Yet fully autonomous cars aren’t even legal at this stage, and EVs, though growing fast, still barely register in terms of annual car sales. In the first three quarters of this year, for instance, just 142,000 plug-in vehicles were sold, according to EV-Volumes.com. That’s 1.1 percent of all car sales in the U.S.; Honda alone sold more cars than that just in September.

So what gives? This can’t merely be me-too spending on a seemingly hot trend, nor could it be frantic competition for actual EV and autonomous-car dollars, since that market doesn’t exist in any significant way at the moment. Instead, the spending spree is happening because everyone from existing carmakers—already rolling out semi-autonomous cars and electrifying much of their lineups—to tech giants to Silicon Valley startups, are battling to stake an early claim in a market that industry analysts don’t expect to mature for at least a decade. According to those same analysts, the investment dollars are flowing from every direction because the writing is on the wall ... well, actually, two walls: autonomy is undoubtedly coming; and the EV market is lowering the barrier to entry in the automotive industry. Newcomers with the right skills—that is, the next Teslas—want a piece of that action, while legacy brands like Ford, GM, Toyota, and Volkswagen are doubling down because soon it will be their only hope of staying competitive.

From the autonomy perspective, it’s obviously a natural fit for the technology sector, not only given its proficiency in sensor tech and general computing prowess, but also because those companies typically have more resources to throw at a challenge than car manufacturers.

“Look at the high-tech companies like Apple and Google, and especially the Big Three in China—Alibaba, Baidu, and Tencent: they all have profit margins in the 20 percent range,” says Egil Juliussen, a principal automotive analyst at research firm IHS Markit. “But carmakers are more in the single-digit profitability. So they invest maybe five to six percent of their revenue in R&D, whereas high-tech companies are at 15 percent. Much of that is going toward autonomy and EV tech, and China is now second to the U.S. in that investing.”

Much of this investment is in the form of acquisitions—say, Uber buying self-driving truck startup Otto last year—but there’s also heavy venture capital funding in play. “OEMs are setting up their own venture funding arms to compete, but they are increasingly finding themselves now competing with new Silicon Valley players, which have different operating business mode to theirs,” says Singh. “For the tech companies, there is an opportunity to benefit from this $7 trillion dollar mobility market, especially as the vehicle will become connected and autonomous.”

Indeed, companies like GM, Audi, BMW, and Volvo have established venture capital funds to compete with the other venture capital funds prowling around the tech industry. Two funds, Autotech Ventures and Icebreaker Ventures, were formed in just the past year year with the goal of funneling automaker and financial-investor cash toward promising mobility startups. Even South Korean smartphone and television powerhouses LG and Samsung are throwing their respective hats into the ring, each recently launching funds to also buy into the mobility action. The pool of recipients is more varied, as well, with the group’s collective targets sometimes being less obvious than you might expect.

“Cybersecurity is now a big thing, too,” Juliussen says. “Just this week, OEM supplier Continental announced it would acquire Israeli cybersecurity firm Argus for an estimated $400 million. Cybersecurity will absolutely be required for autonomous vehicles in the future.”

Of course, EVs are increasing part of the future-mobility equation, as well, and they represent a uniquely larger-scale challenge, and opportunity, for tech firms and their investors. In this case, however, the key facilitator isn’t so much the presence of EVs as it is the absence of internal combustion engines. “It’s a much more open market now, because the complexities of the gasoline engine and the experience you need to build one are no longer part of the equation,” Juliussen says. "When EVs came along, there were lots of companies that had experience with batteries and motors that could suddenly enter the industry. You still need capital and factories and supply chains, but suddenly it’s now feasible to compete as a carmaker. Tesla proved this.”

Juliussen says the tech companies and Asian conglomerates are working to position themselves for the next generation of mobility, and when possible, to become OEMs themselves—something that should scare the pants off the legacy carmakers. While EVs aren’t exactly flying off the lots right now, as battery tech comes down in price, charging infrastructure spreads, and autonomous capabilities rise commensurate with it, the balance will inevitably shift in their favor. At that point, competition will reach a fever pitch.

Just take this final example: Zoox Labs, a secretive startup still in stealth mode, has pulled in almost $300 million in funding and is now worth over $1.5 billion—before even going public. Its product—an autonomous, upscale taxi fleet with the supporting ecosystem necessary to scale it up as a service—hits all the right notes.

“Someone might acquire them, or they can shoot to the top themselves,” Juliussen argues. Think Ford and GM would want some of that action? Yeah, we do, too.