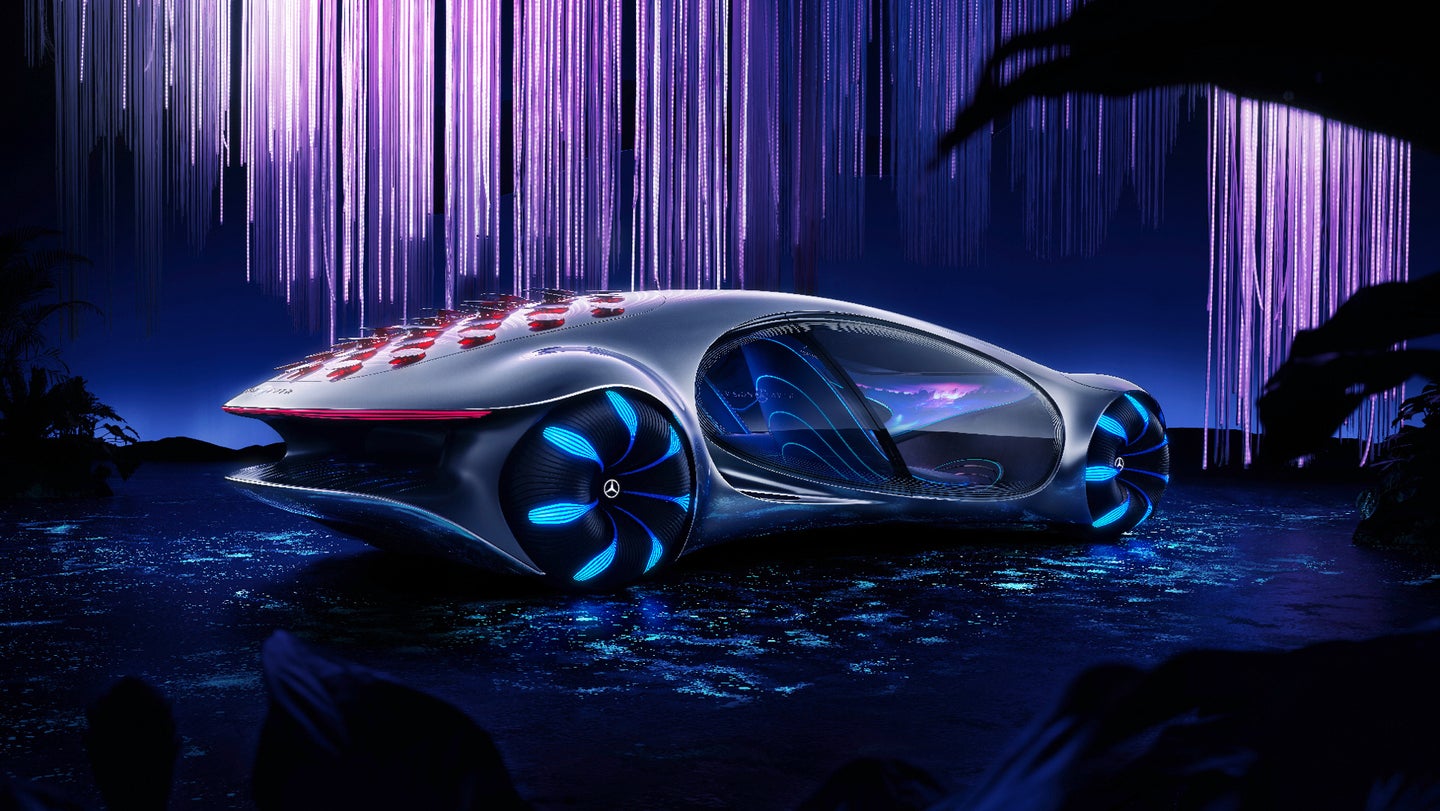 Of all the rehashed Hollywood reboots, the one we least understand is the product tie-in buzz of the upcoming Avatar 2, 3, and 4 movies. Who out there wants a sequel to a dazzling but otherwise forgettable movie that turns 11 years old in 2020 and is basically a ripoff of Dances with Wolves? Do Avatar stans exist? Who is this for aside from Avatar director James Cameron's ego?

Well, since that other Stuttgart-based car company had to have its own flashy sci-fi tie-in, Mercedes-Benz has decided upcoming Avatar films were the perfect tie-in to for its Vision AVTR concept it unveiled at this week's 2020 Consumer Electronics Show. The car, which was designed with input from James Cameron himself, is a showplace for far-future vehicle tech that merges man, machine, and nature.

The Vision AVTR name isn't just a callback to Avatar itself—it stands for Advanced Vehicle Transformation. The name isn't the only nod to the burgeoning franchise on this concept car as Mercedes calls this design language "One Bow" because the Na'vi characters in Avatar use bows. Sure. It even has 33 scales running up the back, which Mercedes calls "bionic flaps." Those scales are there to communicate with the driver's gestures, effectively making the car an extension of the person inside.

The design was heavily influenced by organic forms, with Daimler Group Chief Design Officer Gordon Wagener likening the interior to a cocoon. The center console's treelike shape was designed after the Na'vi's holy Tree of Souls, as it extends out to the A-pillars of the car and forms the shape of its roof. The front seat itself was modeled after the Na'vis' leaf hammocks. The motion of the doors was inspired by flying Banshee and Ikran mounts, and pulsating lights inside and out were inspired by the bioluminescence of certain animals and plants in the Avatar universe.

It also includes far-far future technology such as the Vision AVTR's control unit (no steering wheel here), which scans your hand to turn the car on, at which point it recognizes the driver by their heartbeat and breathing.

Lifting your hand prompts the Vision AVTR to project a menu onto your palm where you can explore a 3-D rendering of Avatar's Pandora world. There are no physical controls like knobs or switches. It's all gesture-based with Mercedes calling these systems "neuromorphic hardware," and claims that they reduce the energy demands of various chips, sensors, and like components to only a few watts.

Interior lighting is controlled by the passengers' moods as sensed through their heartbeats and can narc kids' mood out to their parents when they're in the backseats through a pulse in the seat. Those passengers also get to use the car's "Magic Pool" 3D augmented reality system that's built into the back seat and offers child-friendly annotations on landmarks along the route.

Yet there are some features of this concept car we'd love to see in reality. The batteries aren't made with rare-earth materials or metals at all, sparing the planet from the destructive mining that's the dirtiest little secret of lithium-ion battery production. Instead, the materials used in the Vision AVTR's batteries are compostable and recyclable.

Mercedes Board of Management member Markus Schäfer explained to the CES crowd that the Vision AVTR's 110-kWh batteries could have over 434 miles of range and produce over 350 kW of power. He also explained that the car would recuperate rolling and braking energy, however, which no doubt contributes to that estimated range. Extra energy harvested by the car will be directed back into the grid for public use.

"I am a finance guy by training; I know that resources are always limited—including those of our planet," said Mercedes chairman Ola Källenius during the car's introduction at CES. "And I am Swedish by birth—it's a beautiful, sparsely populated country with abundant nature and wildlife. In fact, more than half of Sweden is covered by trees. To preserve nature, many things need to change. And we are determined to take responsibility."

The commitment to sustainable materials continues inside through the use of some materials that are available in real life today. The floors are made of Karuun, a wood composite made of fast-growing rattan. The seats are made with vegan Dinamica microsuede leather, which is the only vegan microsuede to guarantee an entirely environmentally sustainable production chain.

As for why this concept is a car and not some kind of mass transit (which Mercedes also makes) that could move more people at once, Källenius explained that there's still a growing worldwide demand for personal mobility, particularly in the luxury segment. Mercedes is already committed to reducing its CO2 emissions, water use, waste, and energy consumption in real life through its Ambition 2039 plan, so it's natural that the automaker's wild future-car continues the theme.

Oh, and Mercedes' futurologist Alexander Mankowski explains, "Avatar reveals a symbiosis between the Na'vi and their environment on Pandora."

There's one more feature of the Vision AVTR that's actually kind of neat: its wheels are rounded off on the sides, allowing both axles to move independently of each other. This allows the car to move approximately 30 degrees to the side and move sideways in an "animal-like" crab-walk. While that's not as impressive as the full-on-sideways motion of NASA's real-life Modular Robotic Vehicle and the crab-walk might induce nausea in some passengers, this motion is gaining some popularity, what with more production road cars coming equipped with all-wheel steer, and electric motors.

Mostly, though, the Vision AVTR is just a concept car with a funny Hollywood-reboot tie-in. And though some of the technology is quite cool, we're still skeptical that any of it will make its way into your car anytime soon. That said, given Cameron is still not done filming the sequels, maybe the Vision AVTR's tech reaches the public sooner than the movies? We'll have to wait and see.

A retro-inspired design that stays beautiful is damned difficult to do. How did Mercedes-AMG manage it?

Yes, Elon Musk is Massively Influential, But Not For the Reasons You Think