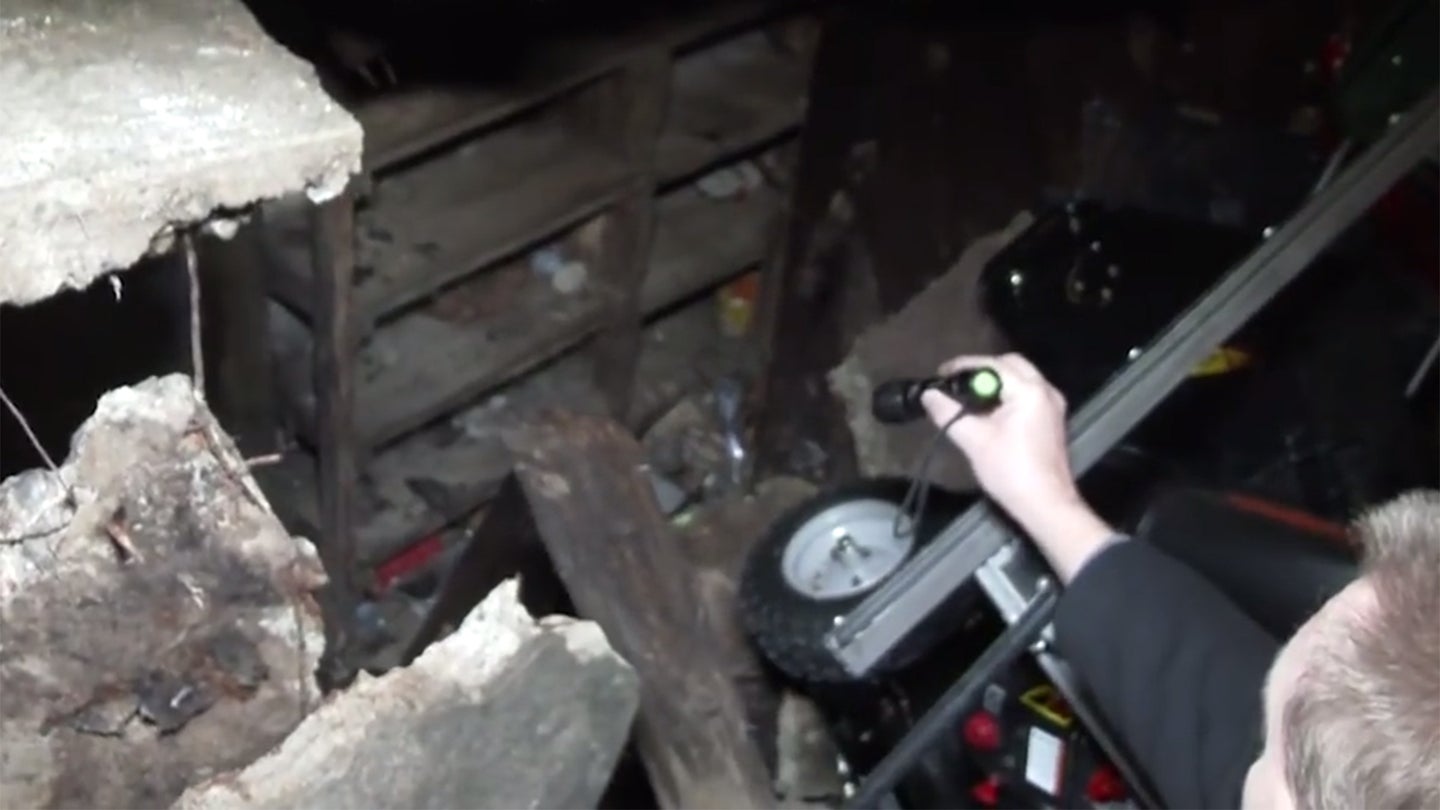 Homeownership is not without its pitfalls, and there's no better example than this story out of Idaho where a family discovered an old secret room under their suburban garage when the cement floor randomly collapsed on Tuesday.

East Idaho News reports owner Brittany Bush and her husband were awakened by a loud crashing sound early Tuesday morning, but failed to find the cause after searching the house. Later that day, Bush opened the door between the house and the garage and nearly fell into a newly-formed chasm.

Upon closer inspection, she and her husband realized the contents of their garage had actually fallen into a man-made room directly underneath the floor that had been entirely sealed off from the world. Amidst the debris from the collapse, they could see a shelving unit with children's toys, hair curlers, a woman's handbag, and a few letters, and it's likely the clean-up effort will reveal a few more artifacts.

According to Bush, an engineer sent out by the insurance company to inspect the damage told her it was only a matter of time before the unreinforced, two-inch concrete floor collapsed into the secret room. He also doubted that it was an old bomb shelter, pointing to the shoddy construction materials and techniques. And it's not listed or referenced in any city or county building documents related to the house, which was originally built in the 1950s. The only clue is an address label that they managed to fish out, which is postmarked March 31, 1985.

From the images, it looks like the family was using their garage more for storage than for parking—which is good, considering the mess they'd have on their hands if a car plunged into the hole. Unfortunately, the engineer examined the rest of the garage and told the family he couldn't rule out the existence of a second space under the floor in a different area. And there's always the chance things could take a dark turn as they sift through the rubble.

"[The insurance provider and engineer] said don’t be alarmed if there is a body down there," Bush told East Idaho News. "'We hope there’s not but if there is stop what you’re doing and call the police.'"

Every Shadetree Mechanic Should Have a Lightsaber in the Garage

David Patterson demonstrates why a lightsaber is even more versatile than Jeremy Clarkson’s hammer.

No, the current owner is not Bruce Wayne.