Displaying your favorite diecast cars in style will set you back around $720. 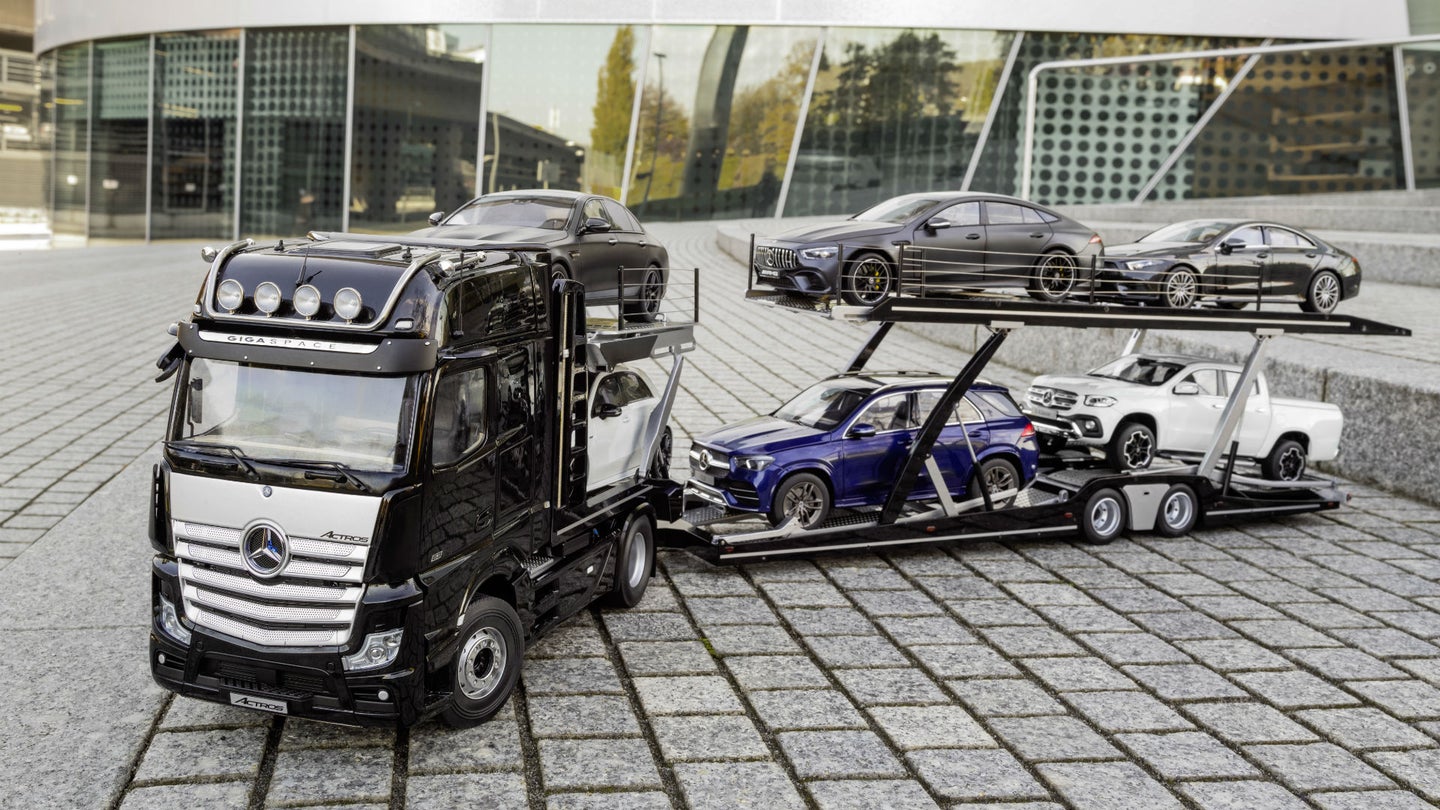 Mercedes-Benz announced a partnership with scale model builder NZG to release a 1:18 scale recreation of its Actros car transporter. The tiny tractor was created using Mercedes' actual 3-D design models and features working lights, opening doors and engine bay, and even little displays that show off the truck's rear view.

Daimler states that it worked with NZG for ten months to develop this Actros model, recreating the full-size vehicle down to the most minute details. The scale version is made up of about 500 metal and plastic parts, including the 225 screws and pins that hold it all together. The truck's interior is also completely replicated in 1:18 scale. Miniscule levers can be seen where they would be on the actual ramp trailer. Lighting features include functional head and taillights, interior lamps, and a light-up star badge on the front.

The tractor and trailer together are over three feet long and weigh a hefty 22 pounds. The set is capable of carrying up to seven 1:18 scale cars. For such a purpose, Mercedes has created a few new models in that scale, including a 2019 GLE, A-Class, CLS, G-Wagen, and SL. However, there's no reason a collector can't load the Actros up with cars from whatever manufacturers they choose.

The Actros model is currently available to order from Mercedes' European online shop. The tractor-trailer set will run you about $720 converted from euros, while the truck and carrier are available separately for around $300 and $460, respectively. The trailer also comes with an adapter plate that will allow it to connect with an older scale Actros truck that NZG released last year. If you want to be able to display cars on the set, that will cost extra, with Mercedes' 1:18 cars running at least $100 a pop.

Snooping around the online shop revealed that Mercedes will unfortunately not ship this set outside of Europe, so re-sellers may be an American collector's best bet to get a hold of this item. Moving over to the USA storefront revealed no Actros for sale, either. There are, however, many 1:18 cars already available stateside, so it could be a matter of time before this premium set makes its way over.

This Franken-Benz is a full foot longer than a Chevrolet Suburban, giving you all the more reason to jump on its for sale listing.