We Take Daimler's First Level 2 Semi Truck for a Ride 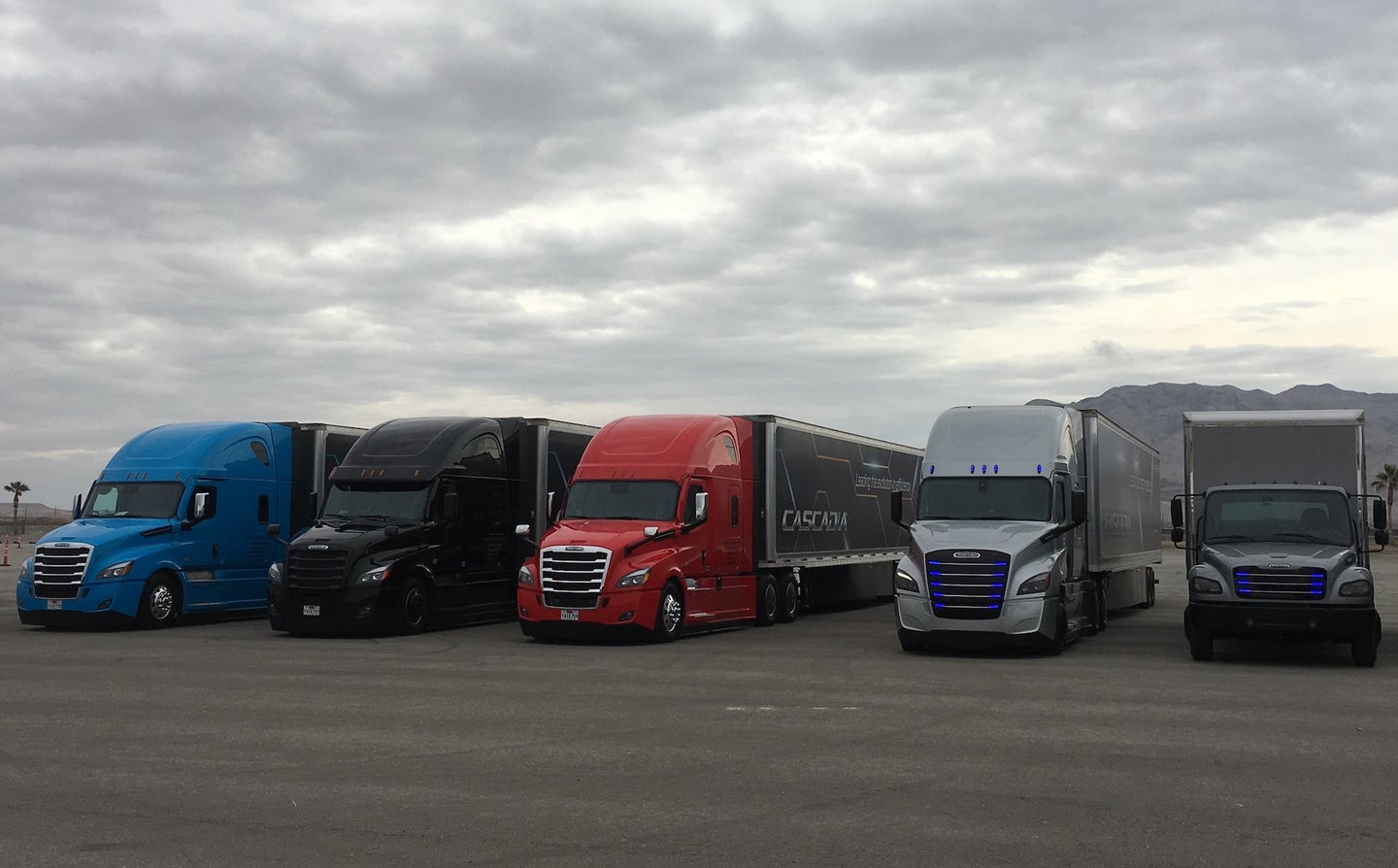 Three years ago, in Las Vegas, German vehicular juggernaut Daimler—the parent company of Mercedes-Benz, as well as big truck brands Freightliner, Western Star, and Detroit—showed a concept tractor-trailer called the Freightliner Inspiration. This was meant to presage the first generation of autonomously driven Class A trucks for American roads.

Today, at the Consumer Electronics Show in Vegas, Daimler unveiled the first production tractor-trailer in its quest to meet this (eventual) goal: the Freightliner New Cascadia, the first truck to meet SAE Level 2 standards—a set of standards that are dubiously defined. This means that the truck is able to offer driver assistance features (to a fully engaged operator) that support both forward and lateral control using adaptive cruise control, automated lane-keeping assist, and lane-centering. It also has automated braking in the event of detecting a moving pedestrian.

“In 1896, Daimler invented the world’s first truck. It was built to haul beer,” said Martin Daum, the CEO of Daimler Trucks and Buses at the press introduction. “This truck demonstrates that same thought process. We don’t develop technology for technology’s sake. We ask, does our decision make the business of our customers safer and more economical.”

The development of a Level 2 Class-A tractor-trailer also demonstrates Daimler’s movement away from two other potential technologies for solving the economic and safety demands of the world’s global trucking industry, which, according to Daimler, is expected to double in scale between now and 2050.

“We are no longer prioritizing platooning,” Daum said, referring to the practice of two or more human-driven trucks following closely behind each other in order to save fuel. “On paper and in the lab, it worked. But even in perfect conditions in the real world, we did not save fuel.”

Secondly, Daimler will no longer be looking at Level 3 automation. The brand instead is planning to skip this step and go right to Level 4. “There is no business case for a high-tech truck that requires that much redundancy to a human operator,” Daum said.

Instead, the focus will be on working toward Level 4 autonomy, but only under certain circumstances. “Not in rural areas, not in urban areas. In hub-to-hub situations on Interstates,” Daum said, representing an end to the hyperbolic projection of the imminence of full autonomy that has plagued the industry for a decade. “And this transformation will take time. It will not happen revolutionarily, because it is very complex, it has to work accurately in every circumstance, and it must work for five years and 500,000 miles,” he said.

“This will require many updates, and a higher-level awareness of the surroundings, in order to suddenly bring an 80,000-pound vehicle to rest on the side of the road when surrounded by moving high-speed traffic.”

In order to further plan for this alleged autonomous eventuality, Daimler has announced an investment of $600 million in automated trucks, a significant portion of which will be spent at the brand’s research and development center in Portland, Oregon. Though Daum said that the creation of an idealized Level 4-enabled tractor-trailer could take at least a decade, and the adoption could potentially take even longer, he felt committed to Daimler’s expedited capacity to develop research prototypes to move this conversation forward.   “We want to put a Level 4 [research prototype] truck on the road this year,” Daum said. “Stay tuned.”

We then had the opportunity to get behind the wheel—well, behind behind the wheel, in the little bed at the back of the cab—as an engineer operator provided a rolling, on-road demonstration of some of the new features integrated into the Brobdingnagian vehicle. Sure enough, the adaptive cruise control and lane-keeping assistance operated just like they do on any typical Mercedes vehicle available over the past decade or more. (Since the truck was still a pre-production prototype, and we left our human sacrifice in the hotel room, we didn’t have the opportunity to test out the automated pedestrian braking feature.)

Though the system will, on its own, make small adjustments to the steering in order to keep the truck centered, the driver is required to keep their hands on the wheel. After 15 seconds with hands off, a visual warning is given, after another 15 seconds an audio warning is added, and after 60 seconds, the lane-keeping system is disabled and the truck will begin wandering around. Unlike in Mercedes’ passenger cars, the truck will not simply pull to the side of the road and cease operation if the driver’s hands remain off the wheel. This difference seemed notable enough for us to ask why it wasn’t available.

“We will develop this in future iterations,” the engineer told us. “It requires many, many updates, and a higher-level awareness of the surroundings, in order to suddenly bring an 80,000-pound vehicle to rest on the side of the road when surrounded by moving high-speed traffic.”