The truck will strut its stuff on a cross-country run. 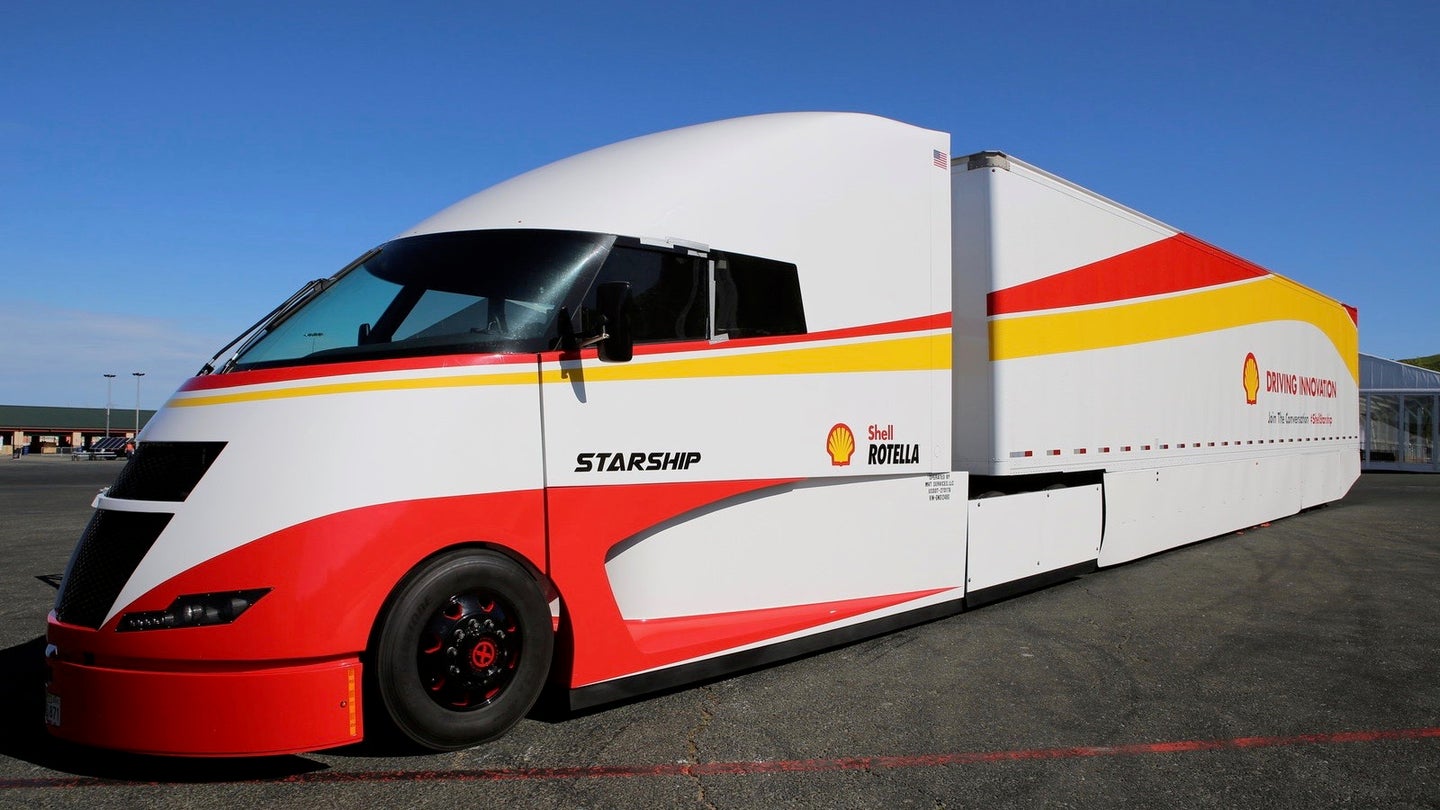 While U.S. regulators seem to have lost interest in enforcing them, Shell expects emissions standards for commercial trucks to get stricter, so it's hedging its bets with what it calls a "hyper fuel-efficient" semi truck project. Dubbed the Starship, it was developed in concert with the AirFlow Truck Company, which has been working to boost the fuel economy of big trucks since the 1980s.

The Starship certainly looks more like a spacecraft than a semi truck. The streamlined body is made from carbon fiber. The tractor sports active grille shutters like the ones used on many current passenger cars and pickup trucks, while trailer sports side skirts and "boat tail" extension panels to further smooth out airflow. The trailer also has a 5,000-watt solar array, which helps power electrical components.

Underneath the sleek bodywork sits a Cummins X15 six-cylinder diesel engine, rated at 400 horsepower and 1,850 pound-feet of torque. The engine uses a new low-viscosity, fully-synthetic oil developed by Shell, and is mated to an Eaton 18-speed automated manual transmission. The engine and transmission have been calibrated to run at speeds as low as 800 rpm, which Shell claims will improve efficiency and pulling power.

Shell did not quote any fuel-economy statistics for the Starship, but AirFlow's last effort, the 2012 Bullet Truck, achieved 13.4 mpg while hauling 65,000 pounds on a coast-to-coast run. Shell and AirFlow are planning a similar run for the Starship. In May, the truck will drive from California to Florida carrying 80,000 pounds of cargo.

AirFlow and Shell also plan to install a hybrid system in the Starship, although it's unclear if that upgrade will be ready in time for the truck's coast-to-coast trip. The plan is to replace the tractor's non-driven rear axle with a new axle that sports an integrated electric motor. The motor will provide a power boost on hills, and will get its energy from an onboard battery pack. Energy will be harvested during braking.

While Shell wants to wring every last bit of mileage out of internal combustion, other companies are moving on. Tesla and Nikola are developing battery-electric and hydrogen fuel-cell semi trucks, respectively. Even Cummins, which built the Starship's engine, has demonstrated an all-electric truck.