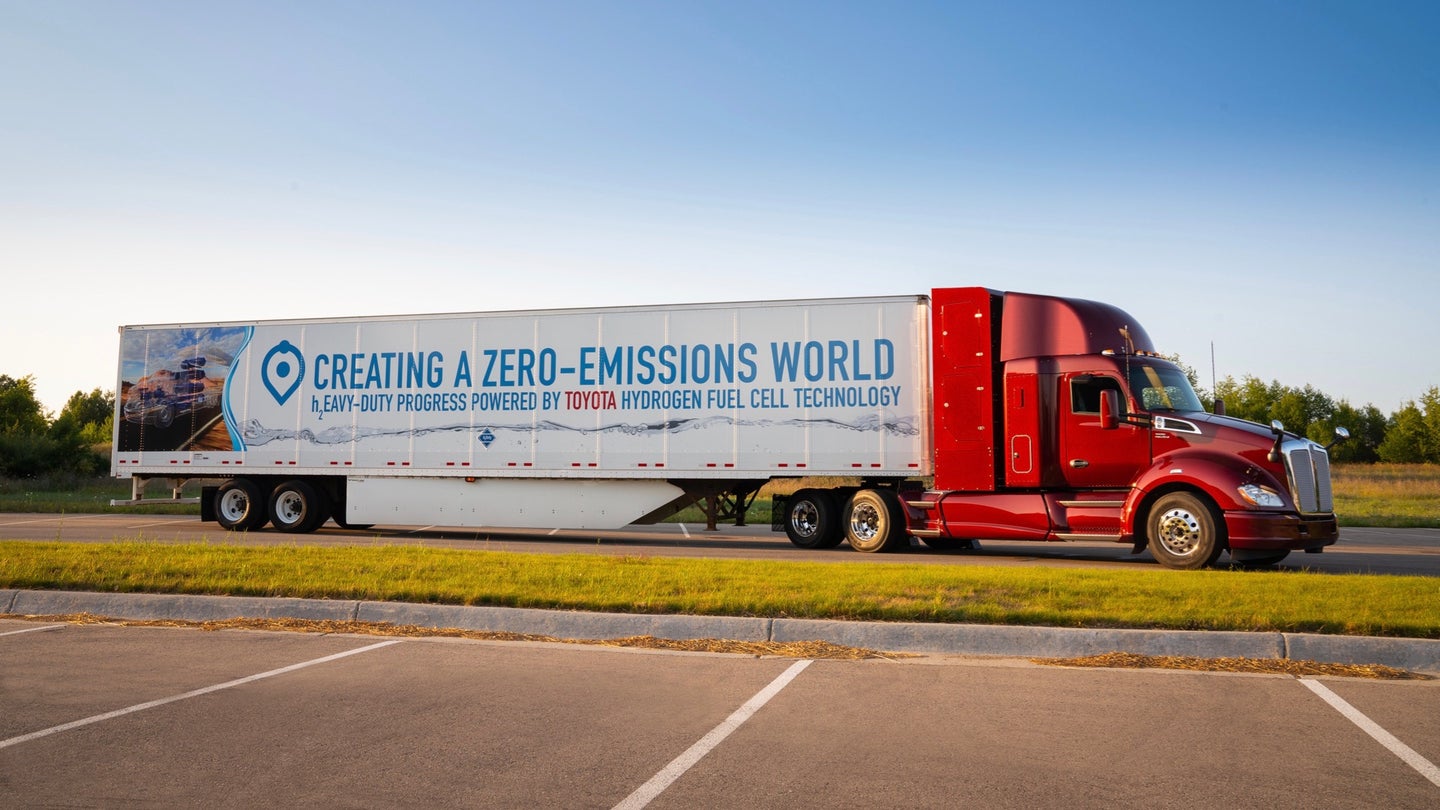 Toyota has been testing prototype hydrogen fuel cell semi trucks in California since late 2017, but now the automaker is ready to step things up. At the Consumer Electronics Show (CES) 2019, Toyota announced that it will partner with Kenworth to develop a fleet of 10 fuel cell trucks.

The trucks will transport cargo across the Los Angeles basin, including to inland cities like Ontario and San Bernardino. The project is being funded by a $41 million grant from the California Air Resources Board (CARB), itself part of a larger $82 million funding program to add more hydrogen fuel-cell vehicles and fueling facilities around the greater Los Angeles area by 2020.

Toyota's choice of Kenworth as a partner is not surprising. The automaker used Kenworth trucks as the basis for its prototype Project Portal hydrogen fuel-cell semis, the first of which began operating in the Ports of Los Angeles and Long Beach in October 2017. Toyota introduced an updated second-generation version in 2018, based on the Kenworth T680.

The 10 new trucks will also be based on the T680. In place of their stock diesel engines, Toyota will install hydrogen fuel-cell stacks that generate electricity to power electric motors. Think of it as an upsized version of the powertrain in Toyota's Mirai sedan. The semi trucks will also have backup lithium-ion battery packs. Range will be around 300 miles in normal operating conditions, according to Toyota.

The biggest obstacle for hydrogen cars has been the lack of fueling stations, but that may be less of an issue for the Toyota/Kenworth semi trucks. The vehicles will run back and forth between ports and warehouses or rail yards known as "drayage" in the trucking industry. The trips are relatively short and are run on predictable routes so trucks can be serviced by a relatively small number of strategically placed fueling stations.

Commercial trucks are some of the dirtiest vehicles on the road, and fuel-cell powertrains could clean them up. But Toyota and Kenworth won't discuss a larger production run beyond the initial 10 trucks, at least not now. Startup Nikola Motors plans to sell fuel cell semi trucks in larger volumes but, as is the case with all automotive startups, it's unclear whether Nikola will be able to deliver on its promises. Hyundai plans to deploy 1,000 fuel-cell trucks in Switzerland.

Just as battery-electric cars appear to be overtaking fuel-cell vehicles, manufacturers seem more interested in commercial trucks powered by batteries. Tesla is planning one, but so are more established firms like Navistar, Volvo, and Daimler trucks, which has already built a handful of test vehicles.