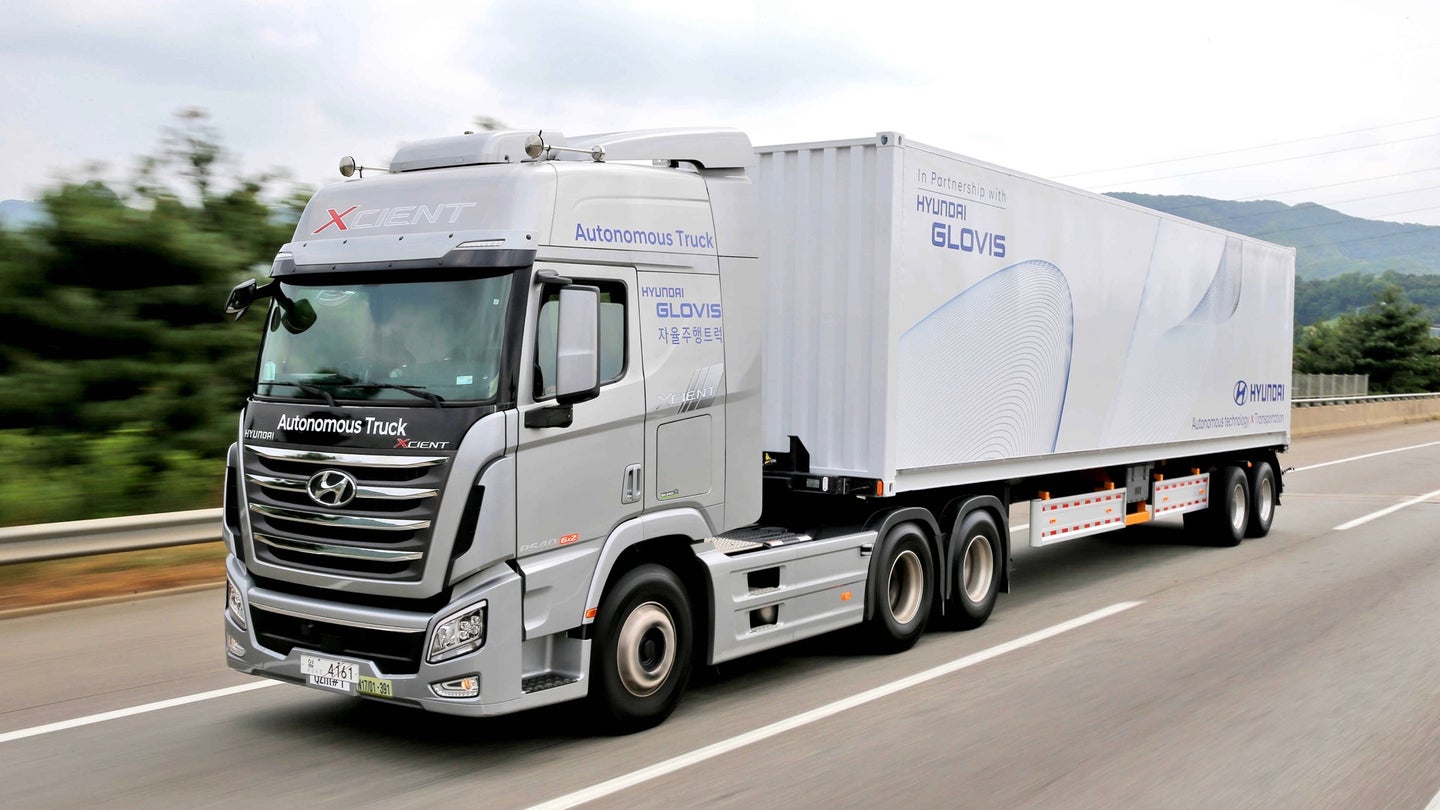 A Hyundai Xcient semi truck just drove itself on a 40-kilometer stretch (24.8 miles) of South Korean highway, according to the automaker. While this was just a one-time demonstration, Hyundai hopes to develop fully-autonomous truck technology, which the company believes will improve efficiency and safety.

According to Hyundai, the test truck had an autonomous-driving system functioning at SAE Level 3. That meant the system could control the steering, throttle, and brakes, as well as maneuver the vehicle through traffic, without human intervention. But Level 3 systems only enable autonomous-driving tech in specific circumstances, usually highway driving. During the demonstration, a human safety driver was onboard and ready to assume control in the event of a problem.

The test truck was equipped with three front and side-rear cameras, two front and rear radar units, and three lidar units mounted on the front and sides of the vehicle. A hitch-angle sensor monitored the change in angle between the tractor and trailer, which Hyundai said helps stabilize the rig during sharp turns. Data from the sensors was compared to high-definition maps, allowing the truck to orient itself and make driving decisions.

The demonstration was conducted on a well-traveled stretch of highway between Uiwang and the port city of Incheon. Hyundai said this route sees a lot of traffic on a regular basis from trucks transporting cars and other locally-manufactured goods to Incheon for export. The Xcient semitruck, which has a cargo capacity of 40 tons, traveled the 24.8-mile route in one hour, according to Hyundai, while "abiding strictly" to the 90 kph (55.9 mph) speed limit.

Hyundai hopes to put trucks with a greater degree of autonomous-driving tech capabilities on the road by the 2020s. The company is one of several interesting in "platooning," an industry term for operating a convoy of autonomous trucks together, with trailing trucks taking their cues from a lead vehicle. Hyundai is also working on autonomous technology in passenger cars, most recently conducting a demonstration run of prototype vehicles between Seoul and Pyeongchang during the 2018 Winter Olympics.

Self-driving truck technology is attracting a similar level of interest to self-driving tech in cars. While Uber recently scrapped its autonomous-truck program, other companies like Waymo, Daimler, and startup TuSimple are continuing development work. But it's unclear how soon autonomous trucks will arrive in large numbers, or what human truck drivers will do for work when that happens.