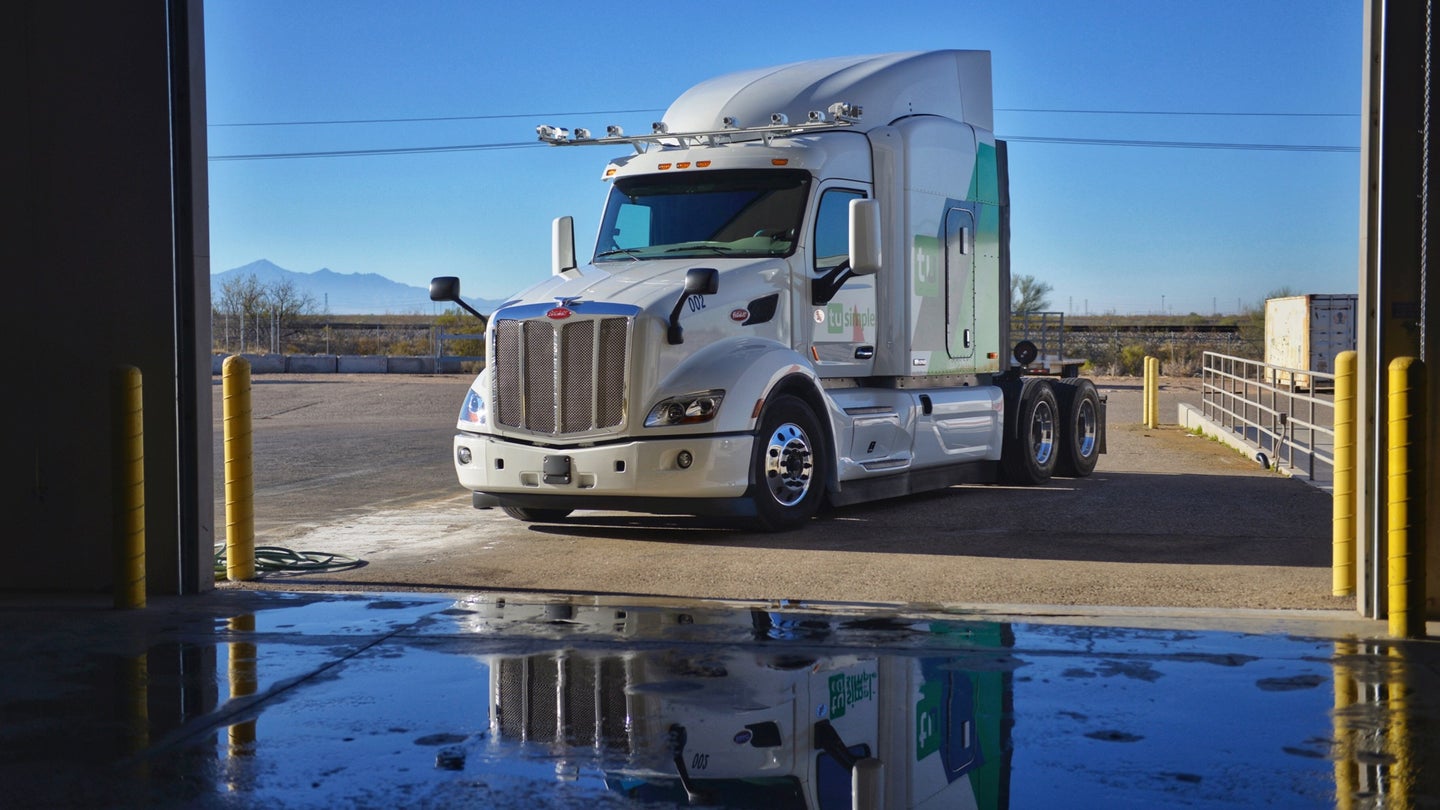 Autonomous-driving startup TuSimple keeps on trucking along. TuSimple began hauling freight with prototype autonomous trucks in Arizona last year, and at CES 2019 it announced plans to expand those operations. The startup is also partnering with Cummins to integrate its autonomous-driving tech with truck powertrains.

TuSimple autonomous trucks make three to five trips a day over three routes in Arizona, according to the startup. TuSimple's fleet currently consists of 11 trucks, and the startup has 12 contracted customers. It plans to expand the fleet to 40 trucks by June, and add a route from Arizona to Texas in early 2019. TuSimple claims to be the only company operating daily commercial freight trips with autonomous trucks.

"We're moving real cargo autonomous for real shippers," Chuck Price, TuSimple's chief product officer, told The Drive. TuSimple doesn't plan to be in the freight-hauling business long term, or to build its own trucks. It wants to market its suite of autonomous-driving tech to other companies, and Price believes using trucks in real commercial-freight service is vital to proving that this tech is ready for prime time.

"We want to be the first with a commercial driver-out system, and to do that we need [to accumulate] millions of miles," Price said, adding that all of TuSimple's autonomous-truck runs are being examined by an independent auditor.

Current routes allow trucks to make a round trip within a single day. Trucks operate between freight depots. This avoids city centers, but Price noted that the routes still include a mix of highway and surface-street driving, and that trucks are capable of driving the entire distance without human intervention. Longer hauls are off the table for now, as they present challenges related to refueling and the greater potential for breakdowns, Price said. The trucks also can't park themselves, as shippers don't view that as important, Price explained. He said self-parking could be added eventually.

The trucks themselves are production models retrofitted with TuSimple's unique blend of sensors. Cameras, radar, and LiDAR are the holy trinity of autonomous-driving sensors, but TuSimple relies mostly on cameras alone. Radar and LiDAR act as "secondary sensors," Price said. Lidar, which is similar in principle to radar but using light instead of radio waves, lacks the usable range needed for operating large trucks at highway speeds, Price said. But by relying on cameras, TuSimple claims its system can "see" up to 1,000 meters (3,280 feet) ahead of a vehicle, which it claims vastly outperforms competitor systems.

Making a truck capable of driving itself requires more than just slapping some cameras on it, though. That's why TuSimple is partnering with Cummins. The startup needs a way to control the big diesel engines found in commercial trucks without bypassing the engines' complex emissions controls, Price said. He believes the ability of companies like Cummins to manufacture compatible hardware will define when autonomous trucks hit the road in large numbers but expects TuSimple to have a commercial-scale system ready within two years.

TuSimple faces competition from Waymo, which plans to apply the tech from its self-driving cars to commercial trucks, as well as Swedish startup Einride, which wants to build its own cab-less autonomous truck. Controversial ex-Uber/Waymo engineer Anthony Levandowski's Pronto.ai startup claims to be focused on trucking, but so far its only tangible product is an alleged cross-country autonomous run by Levandowski in a modified Toyota Prius.