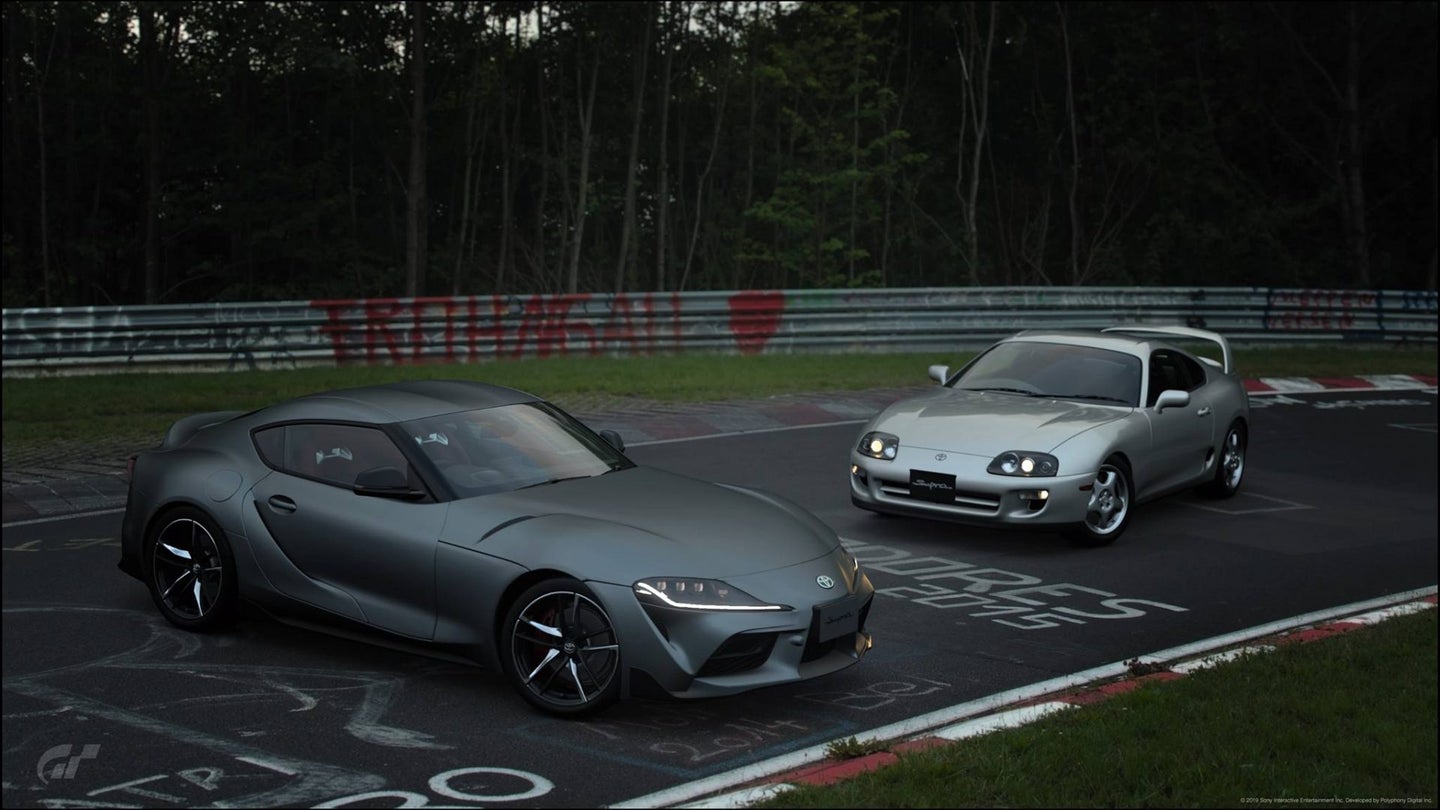 Even before anyone has gotten any seat time in the production-ready 2020 Toyota GR Supra, there are some pretty strong opinions about the car. "Nice Z4," detractors snark. "2JZ or bust," nostalgists declare. "Where is muh manual transmission," purists sniff.

The MkV Supra was recently added to Gran Turismo Sport, and we thought it'd be a fun exercise to see if the criticisms had any merit by taking Toyota's newest sports car out for a virtual spin.

We won't be able to tell you how the HVAC switches feel in the hand, or what its interior smell like. Perhaps that'll be possible with the PlayStation 5 edition of the game. But we can "drive" the new Supra around multiple tracks (including an empty, completely dry Nordschleife) back-to-back with a "mechanically" perfect MkIV in the same sitting.

Try arranging that in real life.

The 2020 Toyota GR Supra RZ, By the Virtual Numbers

Stationary, the Supra looks a little awkward. At a standstill, its roof is too high in relation to the rest of the body and it has a bulbous, prominent nose. Watching one of my own ghost cars fly past me on a particularly slow lap, though, the two-door Toyota looks low, punchy, and purposeful. I specifically remember thinking, "Huh, what a cool looking thing."

Of course, it's all been painstakingly recreated by the wizards at Polyphony Digital, who have perfectly modeled everything from how light dances (or doesn't dance) on my particular car's matte gray paint to the heads-up display above the instrument cluster.

Speaking of speed, Toyota quotes a 4.1-second sprint to 60 mph but when we loaded the car onto GT Sport's dead-straight Special Stage Route X for a spot of "instrumented testing," we consistently logged a zero to 60 time of five seconds on-the-dot. The quarter mile is dealt with in 13.4 seconds at 109 mph. Because the game perplexingly doesn't feature drag racing, "instrumented testing" in this scenario basically amounts to launching the car a bunch of times and poring over the replay data with a stopwatch. (For the serious nerd, this was done on Sports Hard tires with traction control set to 2.)

The virtual 2020 Toyota GR Supra aced the digitized Nürburgring, where rain and tourist traffic is nonexistent. The Supra is, in a word, eager. Eager turn-in, quick steering, strong brakes, and a willing powertrain make the two-door 'Yota agile, forgiving, and malleable.

Toyota says the Supra has a lower center of gravity than the Boxer-engined 86 and is stiffer than the carbon-laden Lexus LFA. After piloting its video game representation, I'm inclined to believe it. However fast you think you can throw the Supra into a corner, it can probably do it quicker. The car handles undulations and elevation changes like a champ.

The 335-horse, 3.0-liter BMW straight-six under the hood puts the Supra a couple of leagues below its NSX and GT-R countrymen but like the handling, it's a unit that's eager to please. It's a solid, strong motor with none of that torque dip nonsense that plagued Toyota's last joint-venture sports coupe. Its twin-turbos make themselves known with an audible whistle above around 4,000 rpm.

It's got an extrovert of an exhaust as well, with crackles galore happening off-throttle anywhere above 2,500 rpm. Seriously, take your foot, er, finger off R2 and it sounds like somebody's zapping a bag of popcorn in the glovebox.

As if the car didn't already audibly let its driver know how fast its engine is spinning, Toyota has fitted a nifty shift indicator inside of the tachometer that lets your peripheral vision know when to select the next gear.

So, we now know the 2020 Toyota Supra can do the hot-lapping thing. But what if all you want out of a trip to the track is to leave some skid marks and destroy some tires? To see how it gets on, we loaded up Tsukuba. In addition to being the venue of countless Best Motoring showdowns, the 1.27-mile circuit also regularly plays host to Formula D. That's D as in drift.

Will the new Supra powerslide? With the right motivation, absolutely. Dialing down the traction control, flicking it into a bend and mashing the throttle results in theatrics worthy of an armchair Ken Block. Sustaining massive chains of tire smoke through Tsukuba's long Turn 12, in particular, is hilariously easy. Suspiciously easy. It's almost as if this car was developed by the same man responsible for the born-to-drift 86—which it was.

So, the 2020 Toyota GR Supra appears, in digital form at least, to be quite the sports car. But how does it compare to the original? To find out, I climbed behind the virtual wheel of a twin-turbo 1997 MkIV Supra, the car that arguably catapulted the Supra into its cult classic status.

Judging from internet opinions, the new, Austrian-born Supra sounds like a world apart from its dad but piloting both back-to-back around the Nordschleife, they actually feel more similar than expected. At the end of the day, they have the same layout, same displacement, same number of cylinders arranged in the same way, and are very much in the same ballpark in terms of power and weight.

Not so surprisingly however, the elder Supra's road manners are less precise, more relaxed and GT-like. Its 2JZ engine note might be filed under the same genre as the B58 if they were listed on Spotify but the Toyota-made mill sounds heavier, industrial, and more sonorous. Hairier-chested. It's a glorious engine to operate and one that gets better and better with every lap.

This addictive personality extends to the rest of the MkIV's driving experience. Caning the old Supra around an empty Nürburgring is supremely engaging in a way the new car can't really match. Negotiating the old car's relatively primitive chassis around the Green Hell's most technical sections requires a lick more concentration but is a magnitude more rewarding as a result.

In isolation then, the 2020 Toyota GR Supra feels like a solid performer. Its better-in-action design, layout, and technical specs all pay tribute to the '90s legend that it owes its existence to. Is it quite as special a driving machine as that old car, though? We're not so sure.

One thing is certain, though: While we can't wait to sample the new Supra in real life, its binary-based counterpart is doing us just fine for now. Excuse me while I get some more "seat" time with Toyota's latest sports car. For research.