While the previous Rock Creek only got visual add-ons, the new model gets a bit more character, including an 11-hp power bump (on premium fuel). 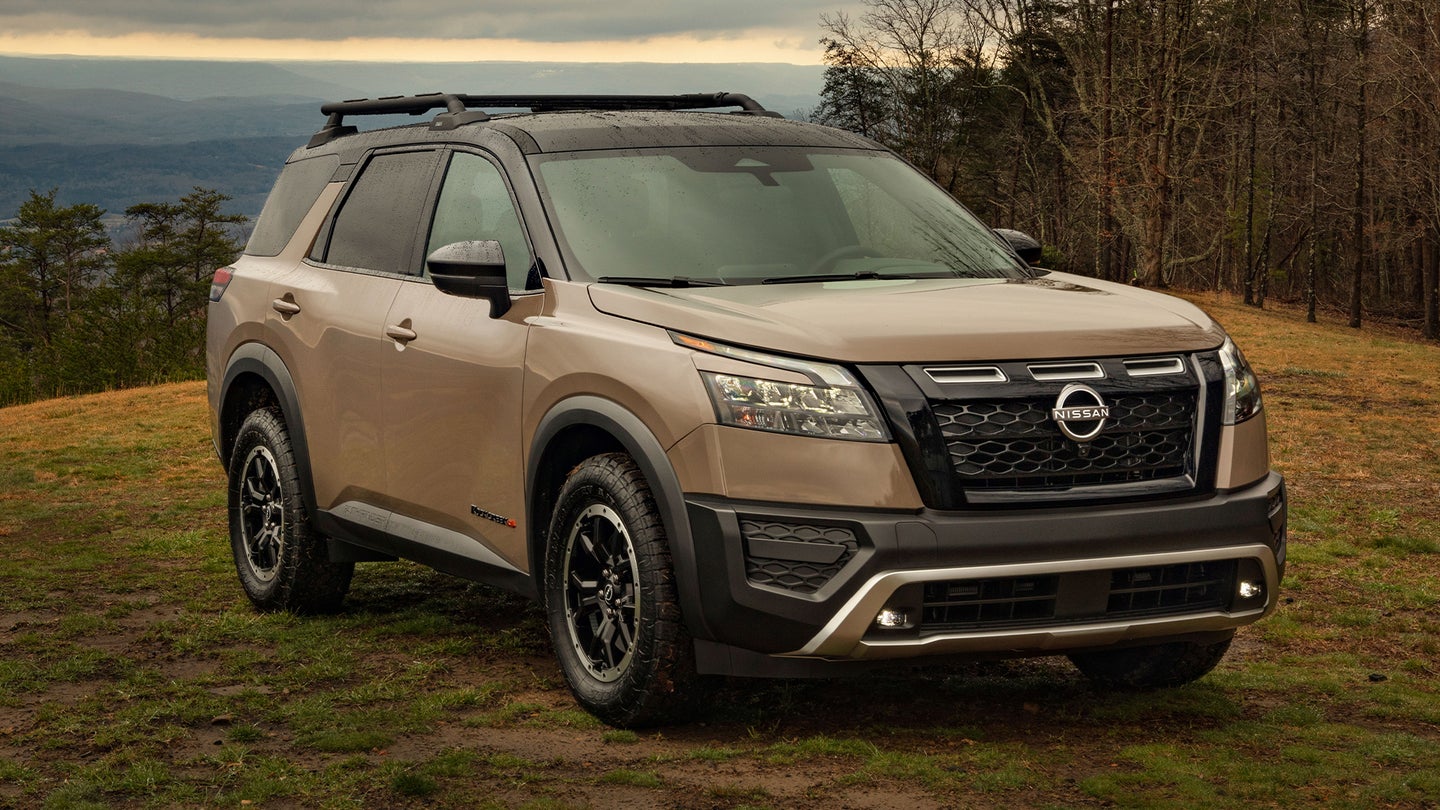 The current Nissan Pathfinder is all about re-discovery. Nissan worked hard to bring the Pathfinder back to its roots for its fifth generation, and while it was certainly a step in the right direction, the spirit of the SUV still felt very rounded-off and not very eager to find a path instead of pavement. That's about to change with the 2023 Nissan Pathfinder Rock Creek.

Adventure came a-calling again, and Nissan is finally giving the truck the ruggedness that many enthusiasts are craving. But unlike the previous-gen Rock Creek edition, which we drove back in 2019, this new model actually gets performance enhancements and not tough-looking accessories for an off-roady look.

Heading up the changes is a small bump in ride height. The suspension of the Rock Creek has been lifted 0.62 inches compared to the factory Pathfinder, boosting the underbody clearance a bit on its own. Nissan also tuned the suspension specifically for the Rock Creek platform to make it more off-road focused, though the underlying hardware does not appear to have changed. Lastly, to fill up some additional wheel gap, a set of Toyo 265/60 all-terrain tires are mounted to 18-inch beadlock-style wheels to complete the look and capability.

Under the hood is Nissan's tried-and-true 3.5-liter V6 mated to a nine-speed automatic transmission. Remember, no more CVT here. This should come as no surprise given this engine is the staple of every other Pathfinder trim out there, however, Nissan has revised the fuel mapping to squeeze a few extra ponies out of the aging powerplant. If filling up the tank with premium fuel, the Pathfinder will make 295 horsepower and 270 pound-feet of torque—that's up from 284 and 259, which is the power output it will make if gas prices have you putting in regular instead.

The Pathfinder also comes equipped with all-wheel drive as a standard appointment for the Rock Creek trim, which makes sense given that it's all about finding going off the beaten path. All of that put together gives you a fairly fun driver with a bit of power and enough capacity to tow up to 6,000 pounds.

And the package wouldn't be complete without some visual appointments as well. The front end has been ruggedized, offering a bit more of an aggressive look to really drive home that this thing is built to have fun on the weekends, but can still navigate its way around suburbia while looking good. The exterior also receives some badging, and a tubular roof rack to tie things together. Inside, the truck gets some new leatherette and fabric seats with custom Rock Creek embroidery, and some pretty nice orange stitching to complement the look and feel of the Pathfinder's new appearance.

The Pathfinder Rock Creek will make its official debut at the 2022 New York International Auto Show later this week, and is set to go on sale this summer.

2022 Nissan Pathfinder Review: Finally Competitive Again Thanks to Improved Everything

The fifth-generation 2022 Nissan Pathfinder is a breath of fresh air, with tons of space and a much-improved transmission. But will buyers come back?

The family-friendly features on this SUV are superior to those offered by Honda or Toyota.

Nissan subtracted the CVT and beefed up the interior, adding a removable console, a ton of cupholders, and USB ports all over the place.