‘I Had to Rev the Snot Out of the Buicks’: Wild Stories From an SR-71 Blackbird Crew Chief

Former Air Force Crew Chief Greg Edmonson had quite a bit to share about his days keeping the fastest jet ever built in the air. 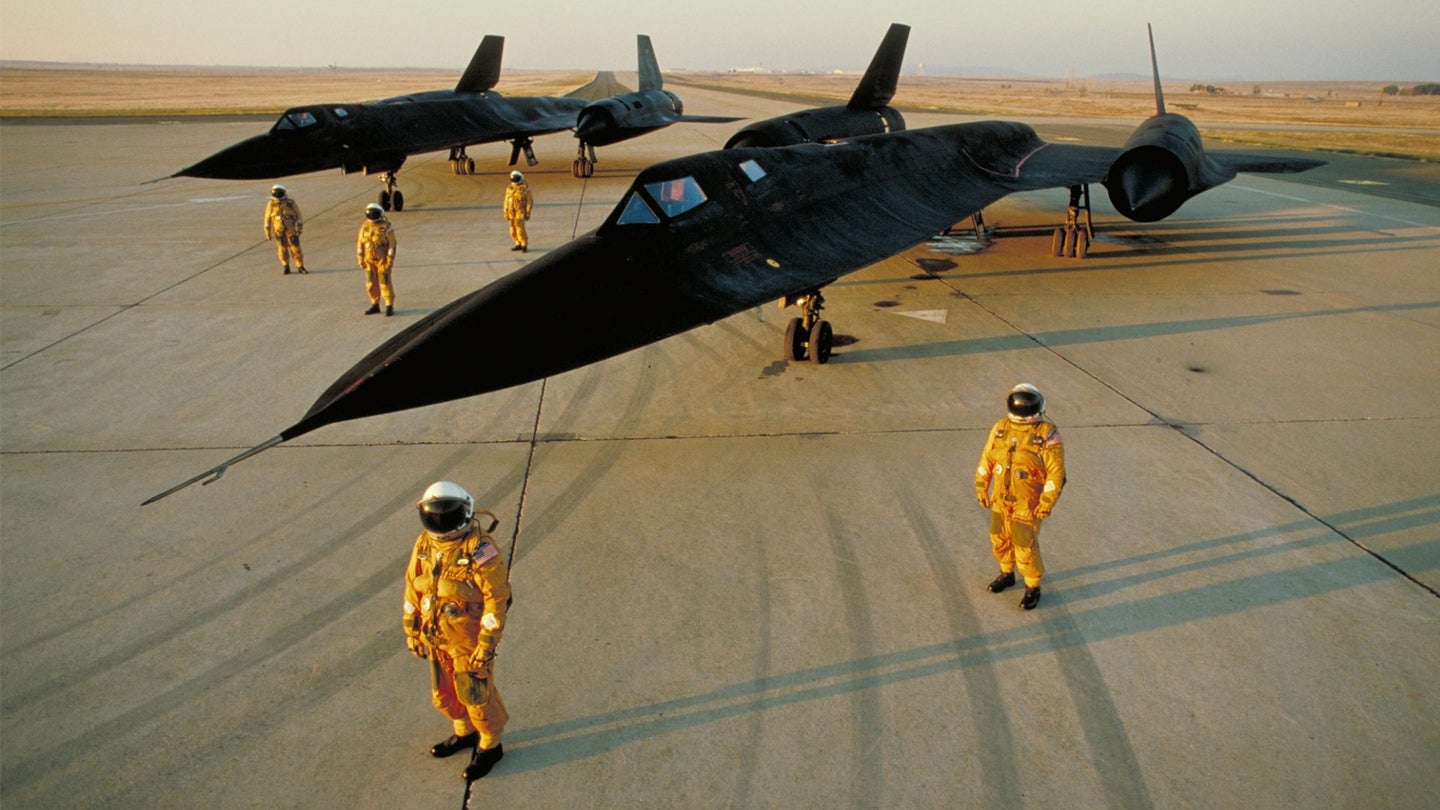 The SR-71 Blackbird may have been one of the most secretive aircraft of all time, developed behind closed doors in Lockheed's Skunkworks. But after some time, it was an aircraft treated like any other. They were flown by the Air Force, they had mechanics to tend to them, and crew chiefs to manage those mechanics. Through the course of writing our start cart-swapped Buick Wildcat story (which you should read!) we spoke to SR-71 crew chief Greg Edmonson to see what it was really like to work with the plane itself.

Edmonson was a crew chief of the Blackbird from 1982 to 1987 and a massive Buick fan as well. I asked him a few questions about his service that didn't end up making the final cut of the first story, but it would be a shame to leave them locked away in an email chain. So here they are: answers to a few questions I had about what it was like to crank over the fastest air-breathing jet ever.

Peter Holderith: When did you become a crew chief on the SR-71 and when did you join the Air Force? I understand you were located at Beale Air Force Base.

Greg Edmonson: I was stationed at Beale AFB with the SR-71s from October 1982 through December 1987. I joined the Air Force in August 1982. Beale was my first duty station.

PH: How loud was the cart? I understand it did not have any mufflers and was just 16 straight pipes routed out the sides. Was it louder than the J58 it was starting? Did you guys wear ear protection?

GE: The carts were very loud. The outboard pipes were about a foot long, The inboard wrapped around the bottom of the engines and exited below the outer pipes. You could easily hear the 425s over the J58s. Double hearing protection was worn at all times (earplugs and over-ear).

PH: You say the two 425s had barely enough power to get the engine running and that, "With the chemical ignition system used on the SR, a hung start could be a VERY bad thing!" Can you go into more detail on that? I understand the starting slugs were very volatile but know little more than that.

GE: The J58 used a chemical called triethyl borane (TEB) for starting and to light the afterburner. It is a highly volatile liquid that ignites when it contacts air. If everything was working right, the 425s would start the J58 no problem. But by the time I was part of the program, the Buicks were well worn. The last thing we wanted was for an engine in the cart to expire after the TEB shot. [When] that happened we pressed on with the start on one functioning 425, more often than not over-revving it badly in the process.

PH: You say the 454s that replaced the 425 Buicks were heavily modified to do the same job and still were not as durable. Can you speak more about the modifications to the 454s? You also attribute a quote: "They are too fragile [the 454s] for a Crew Chief to use properly," to AGE. Who and what is AGE?

GE: AGE is short for Aerospace Ground Equipment. They were the unit responsible for maintaining all of the maintenance equipment used on the flight line. This included non-powered (maintenance stands, et cetera) and powered (the AG330 start carts, generators, air conditioners, et cetera) equipment. I never knew exactly what modifications were done to the 454s, but according to the AGE guys, it was a lot.

The 454s got a reputation for being fragile because of the way the different carts were handled. The Buicks were brought to the airplane, cold, or the crew chiefs would pull them from the ready line ourselves. The Chevys, however, would be brought out to the airplane by AGE running and fully warmed up. Quite often, we didn't have time to warm up the Buicks [for] more than a few minutes. As abused as they were, it's impressive just how well the 425s held up.

PH: You tell one funny story about completely grenading a 425 during a start. Do you remember when that was and do you have any other memories of similar incidents?

GE: I was involved in the deaths of several 425s but one in particular stands out. During a late night/early morning launch during an Operational Readiness Inspection, we were starting the No. 2/right-hand engine of the SR. I was at the controls of the cart. Right on cue, the left 425 started missing real bad just as we got the TEB shot so we had to continue the start. With one engine sick, I had to rev the snot out of the Buicks, so much so that the wounded left engine deposited some of its internals on the floor of the shelter. Parts of 2 connecting rods and some piston fragments were waiting for us after the launch was complete.

PH: When there were failures, who fixed the engines (I'm guessing it was the ground crews) and where did you get new ones? You talk about going to scrap yards to look for new motors, but you didn't specify if any were actually ever gathered from there.

GE: AGE was responsible for maintenance and repair of the carts. Myself and a couple of my Buick buddies frequented the local wrecking yards and would let the AGE guys know of any 401/425s we came across. I never knew if they actually stripped parts from the local yards, but I was led to believe they did.

PH: I understand the carts ran on Avgas. Do you remember how much fuel it took to crank over both engines on an SR?

GE: No idea how much fuel was used during a start.

PH: Were you a Buick enthusiast before you got involved with the start carts?

PH: Do you have any Buicks/other cool cars today?

PH: A man who I'm speaking to is putting one of these start cart engines into a 1963 Buick Wildcat convertible. What do you think about that?

GE: I'd love to see it. I think it's a great project. Wish him luck!

PH: I'm not sure if you have experience being a crew chief for other aircraft, but was the SR-71 specifically tricky to maintain? Was it more complex or maybe simpler than people might think?

GE: The primary aircraft I was involved with were the SR-71, the A-10 Thunderbolt II, and the F-4 Phantom II. I also had my hands on pretty much every aircraft in the inventory at one time or another. The SR was a maintenance handful. Very little consideration was given toward maintaining the aircraft. Not to say everything was a nightmare, but nothing was easy. On the contrary, the A-10 was designed with the maintainers in mind. Everything on the A-10 was laid out to make both major and minor tasks as simple as possible. The F-4 was in the middle, some tasks were easy, and some made us want to go punch the chief designer! The SR was designed to fly high and fast with no regard to the maintenance crews.

PH: It seems to me like everyone has some kind of cool SR-71 story—maybe I'm dumb for asking this, but if you have any tall tales I would love to hear them. Whether it's related to a start cart or not, I would be thrilled to hear any you would be willing to tell me.

GE: When we would have the SR at an air show on display, there were always a couple of pilots standing there to answer any questions the public had. On occasion, they would have the crew chief out there as well. Usually the questions were of the standard how fast, or how high variety. Once in a great while we would get a know-it-all with his "That's not what I heard" attitude. We would try to maintain our professionalism but frequently gave in and would start embellishing the aircraft's abilities a bit.

My favorite was that its intake spikes not only controlled the location of the shock wave in the intake (true) but would seal off the intake so it could fly under water. Because if the engine got wet the flame would go out! Or there was a special SR we used when the president had to get somewhere in a hurry! We kept that one in Area 51, of course!

Got a tip or more questions about the SR-71 for Greg? Post a comment or send me an email here: peter@thedrive.com